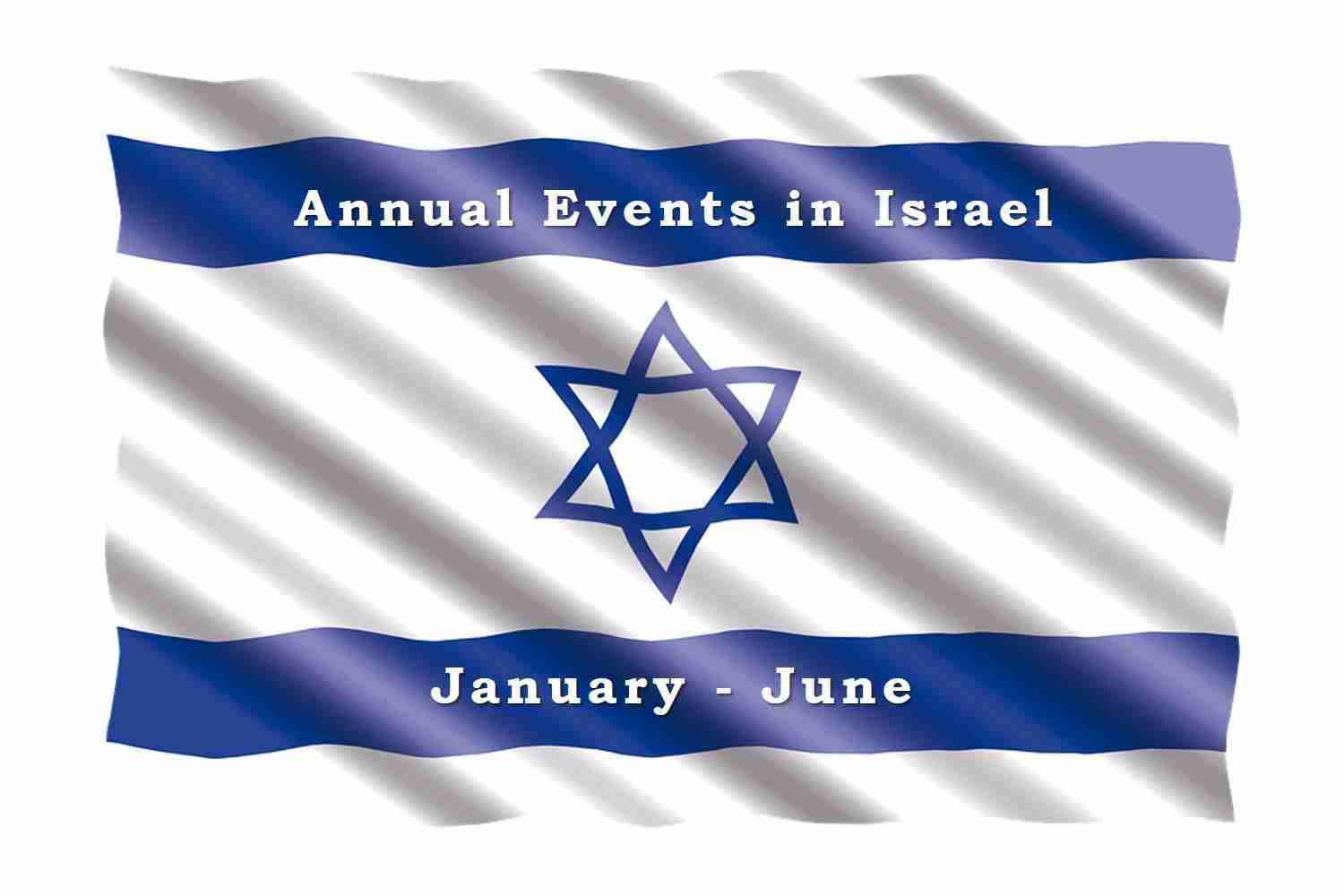 Israel is a festive country, full of festivals, events and holidays all year round. In one of my recent posts I’ve given you a list of the main holidays in Israel and tips on how to spend them. Now, just before the new year arrives, here are the top annual festivals and events in Israel from January to June. Even if you aren’t planning to take part in the events, I do recommend you check what events are going on during your dates of travel, so you will be prepared for the crowds or changes in traffic.

Some events are very popular, so you might want to book accommodation a while in advance. Here are links for comparing accommodation prices in the main cities:

Sea of Galilee Marathon: The highest quality marathon event in Israel, that starts in the city of Tiberias, goes along the southern shore of the Sea of Galilee and ends in Tiberias. You’re invited to come and cheer the runners.

Watching the event is free.

Where? Tiberias, Sea of Galilee.

Israman Eilat: This full and half iron distance triathlon is one of the biggest and most exciting sports event in Israel. The race includes running, cycling, and swimming. You can gather along the Royal Beach area at the Northern part of the Red Sea to see the swimming segment and cheer the competitors.

Watching the event is for free. Because of the event, some roads might be blocked during the event’s weekend (24-27 of January).

Where? All over Eilat. The swimming segment will take place near Royal Beach.

When? This year was in end of January.

Winter Red Sea Jazz Festival: This musical event is so popular, that it also takes place during summer. During the festival, you will be able to enjoy a variety of jazz concerts and master classes. There are also late-night jam sessions.

Where? In different venues in Eilat.

Tel Aviv Marathon: One of the leading sports events in Israel, this multi-course marathon is a great event to watch or participate in. The marathon runs along the beautiful seashore of Tel Aviv and through the main streets of the city. Come and cheer the runners! If you would like to participate in the marathon, you can register through the official website.

Watching the event is for free.

Where? The kick off area is on Rokach Blvd in Tel Aviv.

Darom Adom Outdoors Festival: “Darom Adom” means “Red South” in Hebrew, because of the colors that the Negev gets during this time of year. Each year after the rainy season, the northern Negev is covered with wonderful scarlet red anemones. This, of course, is a reason to celebrate. For five weekends there are many activities for families travelling to the northern Negev, such as poetry readings, concerts, mountain bike marathons and more. If you won’t get a chance to take part in one of the activities, at least come to see the beautiful flowers.

Where? Throughout the northern Negev.

International Jerusalem Marathon: One of the biggest marathon events in Jerusalem. During this marathon you’ll see thousands of people running on the streets of Jerusalem, not only as part of the marathon, but also as part of the half marathon and other shorter races. If you aren’t planning on participating in the marathon events as a runner (which is an option if you register beforehand), you’re invited to cheer the runners from the sides of the streets. It’s free.

Because of the event, some roads might be blocked during the different races.

Tel Aviv Fashion Week: If you’re interested in fashion, you might be interested in participating in this fancy event. To watch the fashion shows, you need to purchase a ticket.

Where? Tel Aviv. Location not yet updated.

International Birdwatching Festival in Eilat: If you’re fond of birds, this is a festival for you. A bit north of Eilat stands the Birdwatching Park of Eilat. During March, thousands of birds are supposed to arrive in the area as part of their spring migration. Together with bird lovers from all over the world, you can watch the birds in the park and get professional explanations. On other days, the park stands quite empty and there’s usually no one who give explanations, so you might want to leverage this festival.

The entrance is free.

Where? In the birdwatching park north of Eilat. You can walk to the park (about a 40-minutes’ walk) or you can catch any bus going out of Eilat on road number 90 and ask the driver to get off at the Eilot roundabout. From there, you’ll have about a 20-minutes’ walk.

Haifa International Children’s Theater Festival: A nice festival if you’re coming to Israel with your kids. During the festival, you will be able to enjoy colorful open-air performances in the area next to the Haifa Municipal Theatre or purchase a ticket to one of the theatre shows taking place inside the theatre.

“Zorba the Buddha” Meditation and Dance Festival: Come and celebrate Zorba in the enchanting and relaxing desert. This is one of the best meditation festivals in the area.

You will need to purchase a ticket to take part in the event.

Where? In Desert Ashram in Shitim settlement, on road number 40. There is an option of a shuttle from Tel Aviv. Check that option on their official website.

Automotor – International Motor Show: If you’re a car lover, this event might be for you. During the event, you’ll be able to enjoy splendid car shows, displaying a variety of cars and motorbikes, including some very special cars.

This event requires a ticket. You can purchase online.

Where? The Israel Trade Fairs & Convention Center in Tel Aviv. Reachable by train.

Top May Events in Israel:

Israel Festival: This is a huge interdisciplinary festival known world-wide. The festival includes drama, music and dance performances that require a ticket and free outdoor performances.

Midburn Festival (Israel’s Burning Man): You’re welcome to take part in this 6-days event, during which a temporary city is built from scratch in the Negev Desert. Then, the people live in this city, that allows a communal life style and radical self-expression. This is your chance to experience near-freedom. After 6 days, the city is burned down to the ground, as if it never existed.

You will need to purchase a ticket for the festival.

Where? In the Negev, near the exit from road number 40.

Where? The parade leaves from Me’ir Park and ends with a great party at Charles Clore beach.

International Student Film Festival: This is one of the top cultural events in Tel Aviv, promoting academic artistry. It is considered one of the three best festivals of its kind in the world. During the festival you’ll be able to see the works of students from the Tel Aviv University’s Department of Film and Television, but also from other schools around the world. The festive week is filled with interesting films, master classes, workshops, exhibitions and parties.

Jerusalem International Book Fair: The Jewish people are known as the “People of the Book”, so it is no wonder that the international book fair is so celebrated in Jerusalem. If you love reading, you might want to walk around the fair’s stalls and get inspired by the many books. You can also try to read the Hebrew titles.

The entrance is free.

Where? The First Station in Jerusalem (David Remez Street 4). Can easily be reached by bus.

White Night Tel Aviv: A great celebration taking place during one night in Tel Aviv, from the early hours of the evening to the next day. Throughout Tel Aviv you’ll find different exhibitions and activities. This is a very popular event, which draws Israelis from all over the state.

Most events are open for free. Some require a payment.

Where? Throughout Tel Aviv.

Jerusalem Opera Festival: This is a grand opera event, set in the outstanding outdoors of the Sultan’s Pool in Jerusalem.

You will need to purchase a ticket for the festival.

Where? The Sultan’s Pool in Jerusalem.

If you know of any more festivals or events from January to June in Israel, please let me know in the comments.