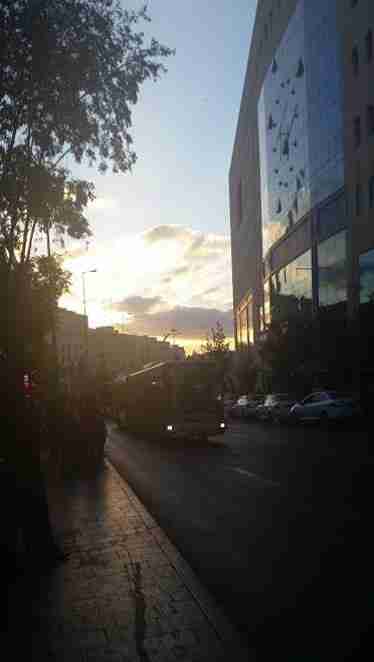 I’ve moved to Jerusalem! And I am planning to spend at least two years in this beautiful, special, enchanting city. My first month in Jerusalem is almost over, so I think it’s a good time to share the things I’ve learned about Jerusalem so far:

Most Restuarants in the Yaffo Street Area Serve Meat –

In Jerusalem it’s hard to find a restaurant that serves both meat and diary food, because most of the restuarants in Jerusalem are Kosher, as it is a more religious city than others. So…. One night I decided to go with a friend to Yaffo Street. We walked through the alleys that come in and out of the main Jaffo Street, searching for a place to eat. I wasn’t interested in meat, so we were searching for a place serving dairy food. BUT THERE WERE NO SUCH PLACES! Almost every single restaurant we stopped by was serving meat. The ones that weren’t were too pricey. At then end, we decided to eat some diary for at Mamila Avenue, which is an open air mall located at the end of Jaffo Street, near the entrance to the Old City.

There’s Always Some Festival or Event Going On –

When I’m driving through the city in the bus, I look out of the window and look at the surroundings. Every couple of meters there’s usually a pole and on the pole there’s usually a big banner announcing about some festival or cultural event that’s coming up. I feel I’m surrounded by culture. I also found a cool Facebook group called “The Guide for the Alternative Jerusalemi” (in Hebrew of course), that posts events going on in Jerusalem every day. There’s always something to do here.

I live a bit out of the city center, so when I want to get to Yaffo Street, the Shuk or the Old City, I need to get on public transportation. The transportation in Jerusalem is really great, but I feel like the best way to get to the city center is by the light-rail train. Jerusalem is the first city in Israel to have a light-rail in it. Now we’re working on adding a light-rail to Tel Aviv. It doesn’t get stuck in traffic jams, it’s not very crowded in the evenings and it costs like a bus ride. Don’t forget to pay for your ticket before getting on the train!

Rav-Kav is So Much Fun –

“Rav-Kav” is a card that you can charge with a certain amount of money and pay with it when riding the bus. When I lived in Eilat I didn’t need it, but now it’s so fun to just put the card on the scanner and not start looking for coins in my wallet. I’ve heard that tourists can also get “Rav-Kav” and that you can charge it as a day-pass or week-pass, but I still haven’t got an official answer from the “Rav-Kav” headquarters. You can find “Rav-Kav” stations in all main bus stations in Israel and ask about the card there.

The French Hill is American –

The French Hill is one of the more modern residential areas of Jerusalem and you won’t find much to do there as a tourist, but I still have to mention – the French Hill feels quite American. When I’m going down the street there, when I go to the commercial center, when I go shopping… I hear American English everywhere. Crazy.

The City is Still Open on Shabbat –

When the Shabbat arrives, a long siren is heard throughout the city, but that doesn’t mean that Jerusalem goes to sleep. Of course, the religious people stay in their homes, don’t use their cars and just rest through the whole Saturday, but there are a lot of non-religious people in Jerusalem and they want to have fun!

To be honest, before I moved to Jerusalem I thought that I will have to spend my Saturdays at home. I thought that Jerusalem is closed on Shabbat. But I found out that there are places that are open during Shabbat, like the First Station. And you can get to those places by taxi or by “Shabus“, a really cool transportation system made possible by the Cooperative Transportation Association of Jerusalem.

And if you have any questions about Israel, feel free to ask them in the comments or contact me.

Thanks for reading and see you soon!

My Favorite Budget Places to Eat in Jerusalem