Home » Where Can You Experience Selichot in Israel?
Festivals & holidays 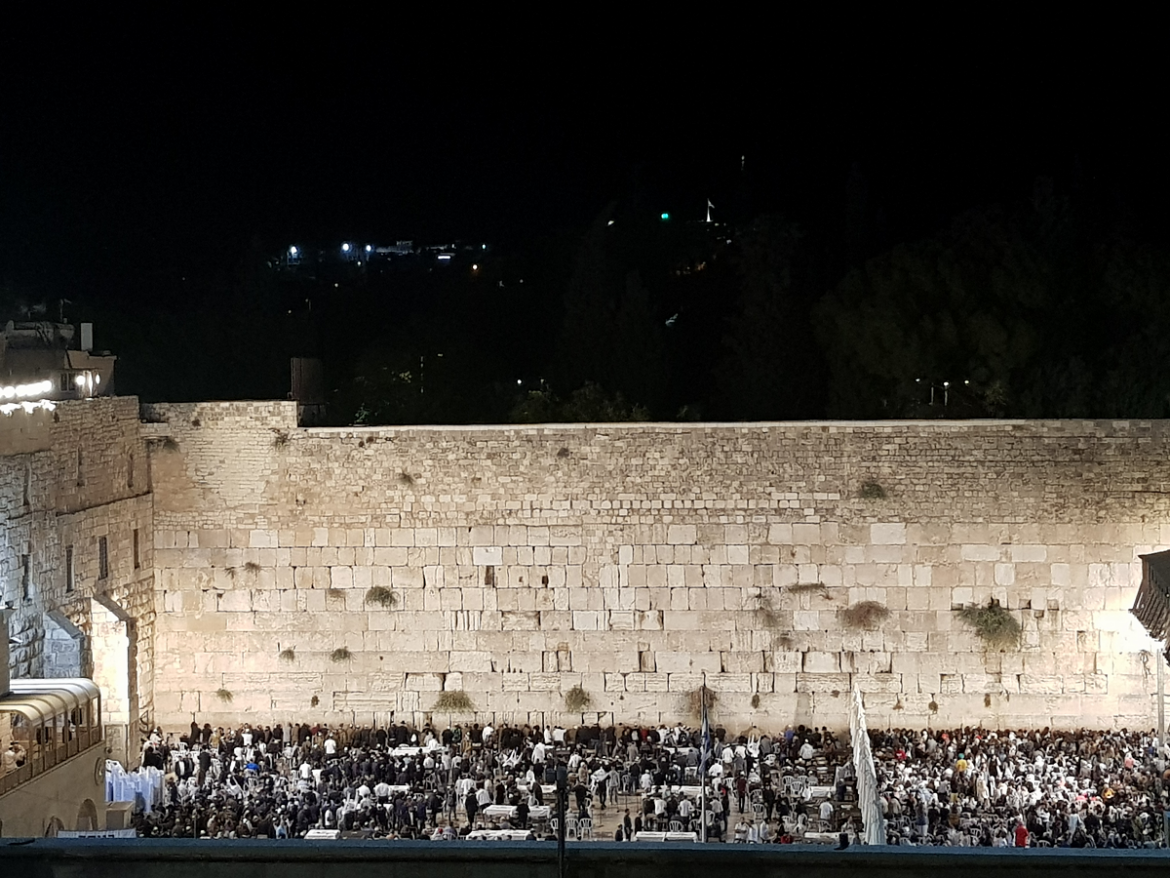 The Hebrew month of Elul started this year two days ago, on the 28th of August. Elul is the month of Selichot, and if you’re in Israel this month, you should definitely go see and experience it. It’s a time when Jews gather in synagogues and holy places and pray for GOD’s forgiveness. The Selichot continue until Yom Kippur, which is the day on which GOD seals your fate for the upcoming year. So… What exactly is Selichot? And where can you experience Selichot in Israel? Here’s all you need to know.

Why are we praying for forgiveness?

Like I’ve already mentioned, Selichot are communal prayers for GOD’s forgiveness. In Hebrew, “Selichot” means “forgivenesses.” Why are we asking for forgiveness? The main purpose of the prayers is to show regret about the sins done by us as individuals and as a collective of all the Jewish people. We believe GOD has 13 attributes of mercy, so we ask GOD for forgiveness and hope we’ll be forgiven.

But why are the Selichot said at this time of the year? Because it’s close to Rosh Hashanah and Yom Kippur. It is believed that on Rosh Hashanah, the Jewish New Year, GOD determines our fate for the upcoming year. Ten days later, on Yom Kippur, GOD seals our fate. These ten days are called the Ten Days of Repentance. They are also devoted to praying for forgiveness, maybe even more than the month of Elul. On these ten days, people have the chance to change GOD’s decision on Rosh Hashanah and show that they have improved their ways and behaviors. This way, their fate might be changed for the better on Yom Kippur. So, if you’ve missed Elul, you can still experience Selichot during the Ten Days of Repentance.

When do people say Selichot?

The Sephardic Jews start saying Selichot on the second day of the Hebrew month of Elul and continue until Yom Kippur. This way, they say the Selichot for 40 days, similar to the number of days Moses spent on Mount Sinai. The Ashkenazi Jews usually start on the Saturday night before Rosh Hashanah. If there are less than four days until Rosh Hashanah, they begin the Selichot on the previous Saturday night.

The prayers are usually held during the late hours of the night and the early hours of the morning. According to tradition, the best time to say Selichot is during the third part of the night, before dawn. But there are also many who pray a bit after midnight, so most of the Selichot tours happen around that time.

Selichot are not said on Shabbat (Friday eve to Saturday eve) or the first day of the Hebrew month, so make sure you’re coming to see it at the right time.

Where should you go for Selichot in Israel?

One of the most popular places for Selichot tours is Jerusalem and specifically, the Western Wall. This is the closest place to where the Holy of Holiness once stood in the Holy Temple. So, it has become the holiest place for the Jewish people. During the month of Selichot and the Ten Days of Repentance, the Western Wall fills with hundreds and thousands of people who come to pray for forgiveness. You don’t have to go down to the plaza to see it. You can also see the huge number of worshippers from the viewpoints above the Western Wall Plaza.

I joined a Selichot tour to the Western Wall a few years ago, and it was a magical experience. The Jewish Quarter is lit and lively, unlike other nights when everything is dark and shut down. And it’s amazing to see the great number of people praying at the Western Wall, reciting the Selichot.

You can find the dates of the central Selichot services at the Western Wall here.

Starting 14 August and up till the end of October, there will be a free shuttle from the First Station in Jerusalem to the Western Wall. The shuttle will operate Sunday to Thursday from 10 AM to 11 PM and will leave every 20 minutes.

Another popular place to go for Selichot in Jerusalem is Nachlaot, one of the first Jewish neighborhoods outside the Old City walls. There are dozens of synagogues in Nachlaot, and the month of Selichot is a great opportunity to visit some of them because they are usually closed. One of the most beautiful synagogues in Nachlaot is the Hesed Ve’Rachamim Synagogue (in Hebrew: בית כנסת חסד ורחמים), located on HaCarmel 18 Street. It has an amazing ceiling.

Want to go on a private Selichot tour in Jerusalem?

I’m a certified tour guide and would love to take you on a Selichot tour in Jerusalem near midnight. Contact me at lior@backpackisrael.com for more information.

Another recommended place for Selichot in Israel is Safed (or Tzfat), one of the Four Holy Cities of Judaism. Known as the “City of Kabbalah“, Safed has been home to some of the greatest Kabbalists and Rabbis, especially during the 16th century. Many Kabbalists and righteous Jews are buried in Safed, and there are also several old synagogues. Kabbalah, by the way, is a school of thought in Jewish mysticism.

Because of its spiritual nature, many people choose to visit Safed and its surroundings for Selichot. Some of them visit the tombs of the righteous including the tomb of Rabbi Isaac Luria, better known as “Ha’ARI Hakadosh.” He was one of the greatest Rabbis of the 16th century and is considered the father of modern-day Kabbalah.

Another tomb that many visit during the month of Elul is the tomb of Rabbi Shimon Bar Yochai, located in moshav Meron about a 20-minutes drive from Safed. His tomb is probably the most popular in Israel. He lived in the 2nd century, and it is believed that he was the writer of the Zohar, one of the foundational books of the Kabbalah.

Why do people visit the tombs of the righteous?

The righteous are Jewish people who are role models for good behavior. We call them “tzadikim.” The tzadikim act according to a very high standard of justice and ethics and observe the Jewish laws very carefully. Those people are usually Biblical figures or spiritual leaders. Because they are so righteous, it is believed that they are close to GOD and can help pass people’s prayers. That is why many Jews visit their tombs and ask for matchmaking, good livelihood, good health, and anything else they wish for.

In the month of Elul, many people visit the tombs of the righteous for Selichot Just like the righteous can help pass other requests, they can help pass the people’s prayers for forgiveness and their commitment to repent. At least, that is the belief.

Not all people like the idea of visiting the tombs of the righteous. Many Jews see it as an act of idolatry because it is sometimes unclear if the person is praying to God or to the righteous. But the custom of visiting the tombs is an ancient one. The Talmud, the central text of Rabbinic Judaism, tells us that the Biblical figure of Caleb visited the Cave of the Patriarchs, the tomb of the three fathers and mothers. There, he asked them to talk to God and ask for mercy on him. So, if they mentioned this practice more than 1,700 years ago, many people, including Rabbis, see it as a good and important thing to do.

The month of Selichot is a special time in Israel, when people look into themselves, ask for forgiveness, and seek ways to improve their behavior. Jerusalem and Safed are both excellent places to experience the Selichot atmosphere. In Jerusalem, you can visit the Western Wall or Nachlaot, and in Safed, the tombs of the righteous. No matter where you’ll go, I wish you a meaningful experience.

Don’t have time to read it now? Save it for later!