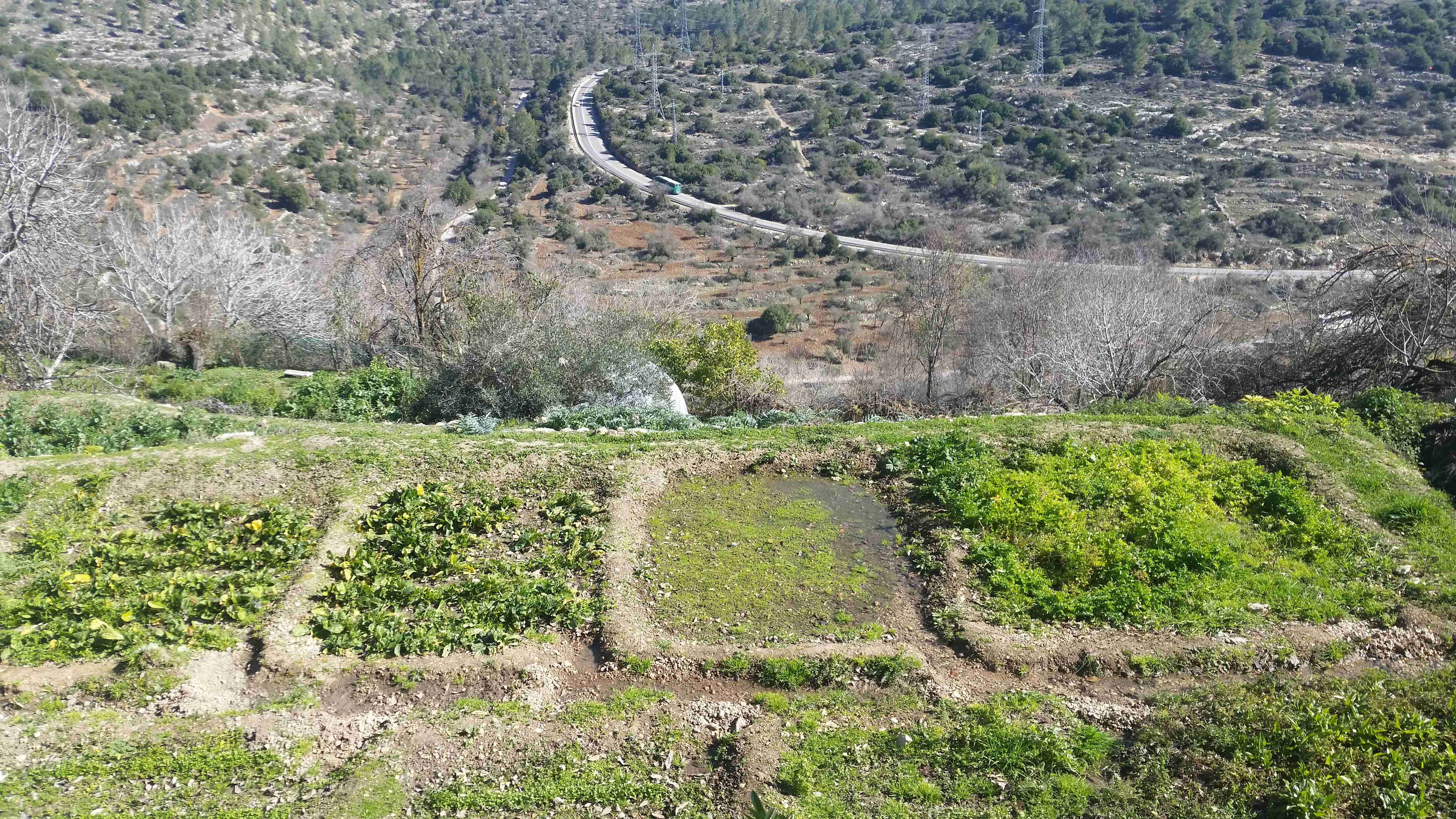 Sataf, a short drive from Jerusalem, is a beautiful site combining ancient history and wonderful views, situated in the Mountains of Jerusalem. This is where you can discover ancient agricultural techniques and see in your very own eyes ancient agriculture terraces, dating back to the Second Temple era, still functioning today. There are also two springs in the area, which you can see (but not swim in) – Ein Sataf and Ein Bikura.

During Chol HaMohed, the intermediate days of Passover, a lot of Israelis are on vacation. Children don’t go to school for a whole week and so it is the perfect time to take them out to explore the nature parks and national parks of Israel. That’s why you’ll see a lot of families outdoors during Chol HaMohed Passover. I also took advantage of the holiday and with a friend of mine went on a short and beautiful hike in Sataf.

A bit about Sataf’s modern history:

Sataf has a very ancient history, but also has some history connected to the last 100 years. Before the Independence War of 1948, Sataf was the site of an Arab village under the same name. During the war, the village was abandoned, as the IDF cleared the route to Jerusalem from hostile people connected to the Arab Legion (in Operation Danny). The village was never settled again.

During the 1950s the site was used by Unit 101 of the IDF as a training area. In the 1980s it was turned into a KKL park, which everyone can visit today.

How to get to Sataf:

I got here by car (a short 15 minutes’ drive from Jerusalem), but it’s very easy to get to Sataf by public transportation as well. Go to the Central Station Light Rail Station in Jerusalem, and instead of going towards the Central Station, cross through the passageway that leads to the road south of the station. The bus stations there are called Binyenei HaUma stations. Wait for line number 183 that arrives every hour – hour and a half starting from 6:30 AM. The ride itself takes about 25 minutes. Get off at Sataf Junction Station (מסעף סטף) and and then walk up the road that leads to the Sataf parking lot. The walk takes about 5-10 minutes, so you’ll be there in no time. And the ride is just a few Shekels.

Edit (from September 2020): If you love hiking, you can also take the trail that connects Sataf to Ein Karem, one of the most beautiful neighborhoods of Jerusalem. The trail is about 7 km long and will take you about 3 hours to complete. It starts from Mary’s Spring in Ein Karem, passes by Ein Khandak, and ends at the Sataf. Personally I have not done it yet, but have heard about people who have (:

So what did I do in Sataf?

There are several trails in Sataf. My friend and I decided to go down on the green marked trail and up on the blue marked trail, a total circle of about an hour and 15 minutes. This is a great trail for those of you looking for a chilled and beautiful hike and for families with children.

We started our visit in the main parking lot, where the kiosk is located. We were there early, so we went to one of the lookouts with breakfast we made at home and ate in front of the wonderous views. Everything around is green and full of trees. At this time of year some flowers are also blossoming.

Then, we continued past the restrooms and down to the beginning of the trail (there’s a map board just next to it). We went down some steps until we got to a fork and chose the left route, leading to the green marked trail. The sign is a bit twisted at this fork, so if the signs aren’t pointing to the right direction, count on me – take the left route. We continued on the trail, that crossed a road and then continued straight and down to the right. The trail has a lot of steps along a few meters, so pay attention to where you place your feet, but don’t forget to look to your left side and enjoy the awesome view! At some point we got to another fork, where we could have continued on the red marked trail, but we chose to keep on going on the green one, called “The Village Trail” (שביל הכפר). Yeah, the signs are all in the Hebrew, by the way, so if you’re not the best in Hebrew, stick to the colors.

We just kept on following the green marked trail. The views never stopped being beautiful and at some point we got to very steep steps. After that, we turned left with the green trail and went down to the area where people can walk in the tunnel of one of the springs, Ein Safat. We didn’t stop to walk in the tunnel, because it’s where people get wet and we didn’t come ready for that. But, you can definately do it, especially during the hot seasons of the year!

We continued straight towards the next fork, seeing some ancient terraces on the way. Instead of continuing on the green marked trail (which would have led us on a long climb down to a deserted parking lot), we continued on the blue marked trail. This was an even more beautiful trail than the green one. Everythere was blossoming around us, everything was green and beautiful and quiet.

Along the trail we saw an ancient winepress, arrived at a nice shaded space and then continued above ancient terraces until we got to one of the parking lots of Sataf. We crossed the road and continued on the blue trail through a small forest. Then we went on a trail above the road up, up, up until we got back to the main parking lot. It wasn’t a hard way back, not at all. It was a great hike, easy, lovely, wonderful time out of Jerusalem!

Trail difficulty: Easy, although there are some steep steps along the way.

Trail time: About an hour and a half, maybe more if you want to visit the spring.

What to bring? Sunscreen, hat, good hiking shoes and suitable clothes if you plan to get wet.

And if you’re coming back to Jerusalem and looking for a private guide – check out My Tours.

A New App for Israel Travel

It is possible to get to the Sataf on foot from Jerusalem as there is a trail between En Kerem and the Sataf.