Meet Umm Rash-Rash: A Piece of History in Eilat 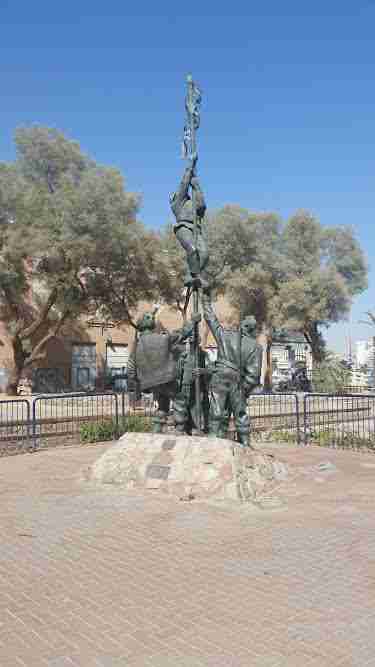 I’ve lived in Eilat for most of my childhood. It is a splendid city for families. There’s the Red Sea, the beautiful mountains, and shopping centers within walking distance. There’s also a small spot right next to Mall HaYam Shopping Mall, which I like to pass by whenever I visit. It’s called Umm Rash-Rash Plaza. Now, what does Umm Rash-Rash have to do with Eilat, you ask? Simple! Umm Rash-Rash was the original name of the area before it turned to Eilat. In this post, I’m going to tell you a bit about the history of Eilat and how it’s connected to this plaza.

If you happen to visit Eilat, you will probably see the mall that stands right next to the sea-line. That’s Mall HaYam. Beside it, to its south, lays a huge plaza. At the front of the plaza is an elevated area. On top of that area, there are a small clay building and an interesting monument, displaying a bunch of people crowded around a flag pole and a person hanging an Israeli flag at the top of the pole. That’s Umm Rash-Rash Plaza.

A few weeks ago I went to the mall. I passed by the plaza, while a father and his little girl passed in front of me.

“Daddy, what’s this building?” the little girl pointed at the clay building.

The father didn’t reply. He was too busy staring at his phone.

The girl stopped and insisted. “Daddy, what’s this building?”

So the father had to take his eyes off his phone and look at the clay building that’s on Umm Rash-Rash Plaza. After a moment or two, he mumbled: “Well, it’s just a plain old building,” and the two of them continued, without taking another glance at the building.

So what’s the story?

The truth is, the clay building was declared an Israeli national site in 1994, so it’s not just a plain old building. Actually, it’s the last building left out of five Mandatory buildings that made up a police station complex. The other four were demolished due to Eilat’s expansion and because they weren’t declared national sites on time. So, this last clay building has great significance in the history of Eilat.

But before I talk about the building, I want to share with you something interesting I found out just two weeks ago. “Rash” means “Strewing” in Arabic (اش). “Umm” means “Mother” in Arabic (that I already knew, but maybe you don’t). So I wondered two weeks ago why did they call Eilat, back in the old days, “Mother Strewing-Strewing”. That’s a weird name. So I checked up the topic in many resources and found out that there’s a legend connected to this place:

Eilat, as you may or may not know, was part of the ancient route to the holy city of Mecca. The Muslim pilgrims walked all the way to Mecca, and their feet got swollen and hurt on the way. The area we refer to as “Umm Rash-Rash” was the residence of an old, wise woman who gathered herbs from the area and made medical powder out of them. Then she would strew the powder over the hurt feet and make them feel better. So those pilgrims started talking about that place on the way to Mecca, where they met “The Mother that Strews,” or better yet, “Umm Rash-Rash.”

That’s a nice tale, which not a lot know of, I suppose.

The Story of the Ink Flag

A better-known story is that of the Raising of the Ink Flag, but maybe you haven’t heard of it either. This story explains the monument next to the clay building.

In March 1949, we were almost done with the Independence war. The only thing left was to sign a cease-fire agreement with the Jordanians. But they wanted the Negev to be part of their territory, although it was supposed to be ours according to the UN Partition Plan. Ben Gurion, the Prime Minister at the time, instructed the IDF to make it a fact that Israel is the rightful owner of the Negev. Eilat is included because it’s situated at the southernmost point of the Negev. So the IDF started “Operation Uvda” (in Hebrew, “Uvda” means “Fact”) and made their way down to conquer Umm Rash-Rash.

I won’t bore you with all the details about the operation. I’ll just skip to the end. The first IDF company to arrive at Umm Rash-Rash found no one there. It seemed the place got abandoned before they came. The only thing left was the five clay buildings of the Mandatory police station and a bare pole. The soldiers forgot the Israeli flag at home, so they had to be creative. The company’s secretary took a white sheet they had and painted the Israeli flag on it, with ink. Then the company’s commander went up the pole, which was not at all steady, and hung it on the top. That’s how Umm Rash-Rash, Eilat, became Israeli territory.

The flag was replaced by a real one when another IDF company arrived two hours later. To this very day, no one knows where the Ink Flag is. We lost it.

Umm Rash Rash has a great part in the history of Eilat. So, if you happen to pass by it anytime soon, take a moment to read the sign and appreciate the monument. It’s a lovely spot!

Want to get ready for your trip to Eilat? Check out my full travel guide to Eilat.

Hope you have great fun in Eilat, now that you know some history about it!

10 Things I Love About Israel

The White Mountain: A Beautiful Viewpoint Over Eilat

Hiking in the Eilat Mountains to Beautiful En...

3 to 5 Days in Eilat: Travel Ideas

Lior,
Thank you for in-lighting me and the world about the meaning of the Arabic name and the short history lesson.
Yaakov

Hi Yaakov, happy to do so. Thanks for your comment ?

the Israeli Army in Umm Rashrash (Eilat) in March 11th, 1949, on the morning after it was captured, with the ceremony of the raising of the standard flag, which was the 3rd of three flag-raisings on the site in less than 24 hours. This event, replaced the famous “Ink Flag” with an official flag and a proper military honor guard.

On 5 March, Israel launched operation ‘Uvda’ with the Negev Brigade and Golani Brigade. By March 10th, the pioneer force of the Negev Brigade reached Umm Rashrash (where Eilat was built later) and took it without a battle. Since they did not have an Israeli flag, they improvised a flag on a white sheet, drew two ink stripes, and sewed on a ‘Star of David’ that was torn off a first-aid kit. This handmade Israeli flag, known as the ‘Ink Flag’ was hoisted on a flagpole in a small ceremony at 4pm. When the Golani Brigade arrived shortly after, a second ceremony took place at 6pm were the ‘Ink Flag’ was replaced with a proper flag. On the morning of March 11th, the Brigade commanders decided to do a 3rd ceremony with a more proper military honor guard, fully dressed and with a trumpet call. These photos capture this rare event, which marked the official handing over of the site from the Negev Brigade to the Golani Brigade.

Here is another interesting story about The in flag that few know about
As i said
I am a bit of a collector of the history of Israel and have acquired many things over the years for my collection .
for years I looked for an original IDF photo of the ink flag to add to my collection without any luck so far
but a few years ago I did acquired one from a famous gallery that was printed from the original negative and signed by Michael Perry The thing is it was printed backwards but there is a story that goes with it

Hi John, thanks for the enriching comment! ? sounds like you have a very fascinating collection. Would be happy to hear more about your collection on lior@backpackisrael.com .