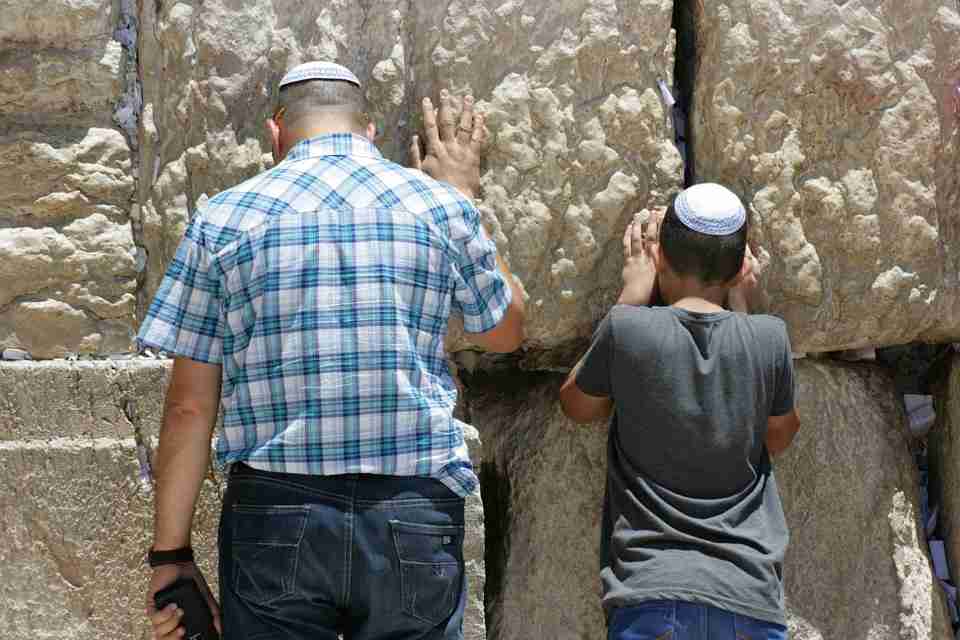 Israel defines itself as a Jewish and democratic state. Does it mean that everyone here is Jewish? No. There are many Muslims and Christians in Israel, who are free to believe in whatever they want and to observe their rituals. But in this post, I would like to focus on Judaism and the Jewish people in Israel. Well, not exactly on them, but on the things you might see or experience in Israel, that are connected to the Jewish laws and traditions. For example, you’ll see that there is almost no public transportation during the holy day of the Jewish week, the Shabbat (from Friday evening to Saturday evening).

Here are some questions you might ask yourself while traveling in Israel.

Why do some men have really long sidelocks?

You’ll see those long sidelocks mostly in Jerusalem, along the faces of the Jewish men wearing black or white clothes. These Jewish people are dubbed “Haredim” and belong to a spectrum of groups within the Orthodox Judaism. You might see Jewish people from other groups with those sidelocks, but the long sidelocks (called “Peyot” in Hebrew) usually appear within the Haredim group. And from a really young age!

What are those sidelocks? The Torah forbids to shave the beard hair. The Judaism explains this law by saying that the shaving of the beard was a pagan tradition and we don’t want to be like the pagans.  Because it appears in the Torah, it is considered a religious Jewish law. Different Jewish groups interpret the law differently and that is why you won’t see everyone with those long sidelocks, only the ones that are really hardcore.

What is the circular fabric that some men put on their heads?

That circular fabric cap is called a “kippah”. Wearing a kippah isn’t a religious law, but it’s much more popular to go with a kippah than to go with long sidelocks. So, you’ll see kippahs almost everywhere in Israel. People wear a kippah abroad to show that they are Jewish. In Israel, the kippah also shows to which Jewish group the person belongs. For instance, black kippahs are usually worn by Haredim or Chasidim, while crocheted and more colorful Kippahs are usually worn by religious zionists or modern orthodox Jews. Get ready to see a wide range of kippahs in Israel, in all colors and sizes.

Besides that, why do people wear a kippah? Because according to a tradition from the Middle Ages, the kippah is meant to remind the person that there is always someone above him. In this case, God.

Why is there a siren on Friday evening in Jerusalem?

Remember I mentioned the Shabbat? In Judaism, it’s the holiest day of the week. It begins on Friday evening, right before sunset. That’s when you’ll probably hear a siren starting in Jerusalem. It will be heard the best in the city center area. This siren is meant to make sure that everyone knows the Shabbat is beginning.

Did you know? In the time of the Second Temple, a priest would stand at the upper south-west corner of the Temple Mount and trumpet or blow a shofar to declare the entrance of the Shabbat. I suppose the siren is a continuation of this ceremony.

Why is there no meat on the menu?

Kosher is much more than seperation of dairy and meat dishes. For example, there are also animals that aren’t Kosher to eat (like shrimps and pigs). The animals also have to be slaughtered in a specific way, in accordance to the Jewish law. But, the most noticeable thing about Kosherness in restuarants is that there are restaurants for meat dishes and restaurants for diary dishes. Those restaurants will usually be closed during Shabbat day as well because that is also part of the Jewish law. One of the top attractions in Jerusalem is the Kosher McDonalds branch. Jewish people from abroad are always thrilled to experience this side of Judaism in Israel.

Does that mean you won’t find restaurants that aren’t Kosher? No. Not all people in Israel are strict about the Jewish Kosher laws, so there are many restaurants that aren’t Kosher. In Tel Aviv, there are plenty, and also in Haifa and many other places. Even Jerusalem has some non-Kosher places. You’ll find them mainly in Ein Karem neighborhood, in the First Station (Hatachana) or along Hillel Street in the city center.

Why is there a large cup in the sink of the toilet room?

If you enter a toilet room in a restaurant or a hotel or any other public place, you might find a large cup connected (or not connected) with a string or a chain to the sink. That might look strange, but it’s there for a reason. The cup is called “natla” and is used during the handwashing ritual. Handwashing is a religious commandment, part of the Taharah (purity ritual), so whoever sees themselves religious enough will do it. You will see those natlas mainly in Jerusalem, where the general population is more religious.

How and when does this ritual take place? In Judaism, it is required to handwash right after waking up, before eating bread, after going to the toilet, before prayer, after exiting a cemetery, and before entering a holy place. That’s why you’ll see natlas in the Western Wall plaza. Using the natla, the person spills water on his hands three times, one hand at a time.

Why can’t men and women pray together next to the Western Wall?

When you’ll arrive at the Western Wall, you’ll see that next to the wall there’s an area for men and an area for women. That’s because the Western Wall is an Orthodox area and the Orthodox groups are very strict about the rules of Tzniut (“modesty”). The Tzniut is connected to modesty of both dress and behavior and is meant to minimize social connections between men and women that are not married. In the Western Wall, even married couples can’t approach the Wall together. Women must dress modestly, which means you can’t come with mini pants, shirts with a deep V, or undershirts. You don’t have to wear skirts or cover your elbows, but minimum modesty is required. The seperation between men and women next to the Wall is meant to prevent the men from being destracted by the women during their prayer.

But what if you really really want to pray with the opposite sex? Lately, there’s been a lot of talk about this issue in Israel. A group of Jewish women, called Women of the Wall, have protested against the current situation that men and women can’t pray next to each other. Today, there is a small area south of the current praying area, where men and women can pray together, called Ezrat Yisrael. Also, there is a hidden spot in the Muslim quarter, called The Little Western Waal (Kotel), where there are no restrictions.

More things to know about Tzniut: There are some Jewish people, mainly Orthodox Jews, who are also strict about touch. In the Jewish law, as part of the Tzniut it is forbidden to touch the opposite sex, except if they are family members. This means that some Jews will feel uncomfortable to even shake your hand as a greeting if you’re the opposite sex. How can you avoid such discomfort? If you know the person in front of you is religious (if he wears a kippah or has long hairlocks) and is your opposite sex, you can just greet them with a smile and a “Shalom” or “Hi”. If they will want, they will reach out their hand. Not all religious people observe this law, so many people with a Kippah will have no problem with touch.

What is the black strap that some men wrap around their arm and forehead?

If you’re passing through a main bus or train station in the morning, you might hear someone shout: “Gever, henachta tfillin ahyom?” This more or less means: “Man, did you already wear tefillin today?”

Tefillin are two black leather boxes containing parchment scrolls inscribed with verses from the Torah. The religious adult Jewish man wears those boxes on his forehead and arm, by wrapping a black strap around his forehead and arm. In ancient times, Jewish people would do this a few times along the day, but today it is common to only do it during the morning prayer, called Shacharit.  During this prayer, the man will also wrap himself with the Tallit, a rectangular shaped garment. It is a Jewish commandment that lies on every Jew male after the age of 13. It’s one of the most popular commandments in Judaism, so many men in Israel do it, even if they don’t see themselves as religious.

What does the tefillin symbolize? According to the Torah, the tefillin should be worn to remind the person and the people around him that God brought the People of Israel out of Egypt. It also reminds the person of his connection to God.

Why do some people kiss the doorpost every time they pass through?

When you see people entering or exiting a place, you might see them kissing their hand and then placing their hand on the side of the doorway. Or, it could be the other way around. If you’ll look closer, you’ll see that there is a long and narrow object on the side of the doorway – that’s the Mezuzah. The mezuzah is a decorative case, in which a special parchment (called “klaf” in Hebrew) is being kept. Inscribed on the parchment are specific Hebrew verses from the Torah. The main verses are from “Shema Yisrael”. The verses are written by a qualified scribe called Sofer Stam.

It is a Jewish commandment to afix the mezuzah on the doorpost of homes, offices, public buildings and so on, so you’ll probably see it almost everywhere in Israel. I have a mezuzah in the entrance to my home, for example. Some even afix it to the doorposts of every room in the house or building, except for the doors that lead to the bathroom and closets.

Other than the commandment, why afix a mezuzah?  Jewish people believe that the mezuzah protects the dwellers of the house from the “evil eye“, diseases, and bad luck. Every few years, some even check that the klaf inside the mezuzah isn’t damaged, to make sure nothing bad happens.

Judaism is all around you when traveling in Israel. You’ll see ultra-orthodox Jews with their traditional outfits, mezuzahs on the doorposts, and plenty of Kosher places to eat. So, if you ever wondered how Jewish life looks like – you can see plenty of it in Israel.

If you need help with planning your trip itinerary to Israel – contact me.

Camping Sites in and Around Eilat