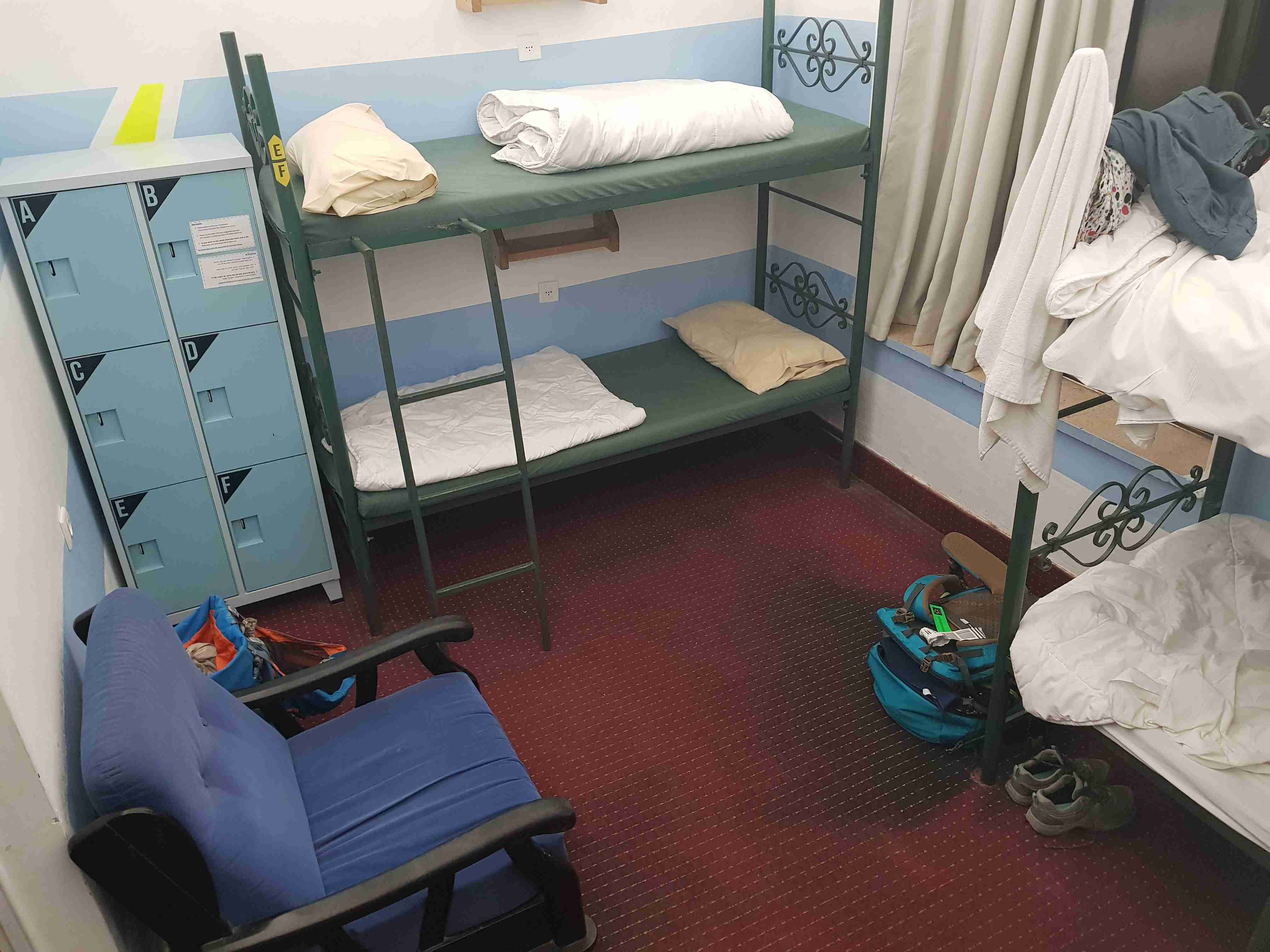 After staying a night at CapsuleInn Jerusalem, I moved to the other side of the road to check out Jerusalem Hostel. While CapsuleInn is one of the newest hostels in Jerusalem, Jerusalem Hostel is one of the oldest in town. It is located inside a historical building, originally built in 1928 as a two-star hotel named Ron Hotel. The little porch above the entrance to the hostel also has a historic story behind it, as it was the porch on which Menachem Begin announced the absorption of the Irgun into the IDF in August 1948. Later Begin served as the Prime Minister of Israel between 1977 and 1983. So, there’s no doubt that this hostel has a historical significance, but what about the stay? Here’s my review of the Jerusalem Hostel.

Disclaimer: This page contains affiliate links, meaning I get a commission if you decide to purchase through my links, at no extra cost to you. I have stayed at Jerusalem Hostel and recommend it for budget-conscious travelers!

Here’s a promotional video of Jerusalem Hostel, published by Sasha Tamarin, which includes some shots from inside the hostel:

Summary of my stay in the Jerusalem Hostel

Location: 5 Stars – Perfect location! The hostel is located on Jaffa Street, facing Zion Square, which is the central square leading to the pedestrian Ben Yehuda Street. It is about a 10-minute walk to both Machane Yehuda Market and the Old City.

Cleanliness: 3 Stars – It seems like they haven’t renewed the place since its opening. I don’t know if the carpets, beds, and bathrooms don’t look clean because they’re just old or because they really aren’t cleaned regularly. One thing’s for sure – the closet in my dorm was dusty!

Security: 5 Stars – I felt very safe. The front door has an auto-lock and can only be opened by the receptionist or with a code.

Facilities: 4 Stars – The place has all the needed facilities, though some of them look a bit worn down. It was really scary climbing up to the top of the bunk bed, as it was really swaying, and the shower could have been perfect if it had a curtain.

Atmosphere: 4 Stars – There are plenty of common areas to meet fellow travelers, including a huge roof terrace. But there aren’t any activities going on, or at least I wasn’t informed of any.

Value for Money: 4 Stars – The prices of a bed in a dorm are very cheap compared to other places! I stayed in a female-only dorm and paid around 80 ILS after VAT, which is crazy to find in Jerusalem. This also included a basic breakfast. If they could make it look a bit less worn down, it would have been perfect.

Jerusalem Hostel is a basic backpacker hostel in the heart of Jerusalem, which really keeps its historical character. The place looks like it hadn’t changed since the beginning of the 20th century when it was first opened as a 2-star hotel. It also doesn’t have an elevator, just like it didn’t have one in the 20th century. If you like this kind of rustic charm, this might be the place for you. The price is also very-very budget-friendly!

Want to stay at Jerusalem Hostel?

Book a stay through Hostelworld or compare prices on Hotelscombined.

Detailed review of the Jerusalem Hostel

The hostel is located in the center of Jerusalem. It is right in front of trendy Ben Yehuda Street and just a few steps away from the “Jaffa Center” light-rail station, which will take you to almost wherever you need. It is also just 10 minutes by foot from the Machane Yehuda Market and the Old City. Of course, there are also plenty of restaurants and bars in the area.

There are plenty of common areas. Next to my dorm, I found a small common room with some sofas, books, and a table. But the thing I loved most about this small common area was the small porch, which has two chairs on it, overlooking the beautiful Zion Square. If you like people-watching, I suppose you can spend a lot of time on this nice porch. There’s also a great breeze at night.

Another common area I found was the roof terrace, which is partly shaded and also overlooks Zion Square, though you need to stand on your tippy-toes to actually see something. On the huge roof terrace, there are plenty of sofas, tables, and chairs to sit on, so you can definitely hang out here if it’s not rainy.

The dorm is very simple. I spent the night in a female-only 6 beds dorm. There’s nothing amazing about the dorm itself. The carpet looks stained, the ladder leading to the upper bunk bed is not too stable, the bunk bed itself sways when you’re on it, the sofa chair looks crumbled and there’s no net on the window, which means you can expect flies. As I’ve already mentioned, the place looks like it hadn’t been renewed for a very long time. The only thing that looks very new – and very not connected to the rustic appearance of the room – is the lockers. By the way, if you want a lock, you can buy one at the reception for 15 ILS. There’s also an open closet hive, which you can use to store your things that are not valuable.

Next to each bed, there’s an electricity socket and a small shelf. During the night I accidentally knocked my shelf off one of its hangers. I was lucky to wake up before it smashed down on my knee or something. Oh, and there’s no bed light, so forget about reading when everyone else is sleeping.

And you don’t have to leave the dorm in order to go to the toilet. There’s an en-suite bathroom! Though, it doesn’t look much better than the dorm itself. The mirror has orange dots all over it, the faucet is also quite colorful and the shower stands not far from the toilet, with no curtain surrounding it. You can lock the bathroom, so no problem with privacy. Though, if you go to the shower, you can expect a large puddle in the bathroom afterward, including on the toilet. At least there’s a squeegee. Because of the small distance between the bathroom and the beds, you can also expect smells even when you’re not in the bathroom. As I said, get yourselves ready for a very simple stay.

Other than dorms, the hostel also offers some private rooms. You can check them out on Jerusalem Hostel’s website.

Breakfast is free. It is served between 7:30 AM to 10:30 AM on the roof terrace and includes boiled eggs, plain sliced bread, olives, tomatoes, cucumbers, some cheese, hummus, and jam. There’s also a free coffee and tea stand, which is available 24/7 in the guest kitchen area on the second floor. In the morning, the coffee and tea stand is also available on the rooftop. As in many other hostels, you need to wash the dishes afterward.

If you prefer to make your own food, there’s a small guest kitchen on the second floor, with all kinds of cooking utilities and a cozy sitting area.

Other free things include: (1) the WIFI, which works great, and (2) the bed linen and a towel, which are given upon arrival. If you come in early and your dorm is still not ready, you can also store your stuff in the free storage room and go out to explore the city until the official check-in time.

So, what isn’t free?  As I’ve already mentioned, if you want a lock for the locker in your dorm you can purchase one for 15 ILS at the reception. The reception also offers earplugs for 5 ILS. The hostel is located in the center of the city, right above all the commotion, so if you have trouble sleeping when people are making noise on the street, you might find those earplugs handy. You can also pay for laundry service.

Then, when I came early for check-in, they also greeted me very nicely. The dorm wasn’t ready, so I asked if I could leave my stuff in the storage room. This is of course possible. The guy at the reception gave me the code to the storage room on the second floor, but when I got to the door, I had a really hard time opening it. I have a problem opening locked doors in general, so don’t take me to an Escape Room ;). Anyway, I went down to the reception and told him I couldn’t open the door, so he went all the way upstairs to open it for me.

Other than that, they were friendly throughout the stay, and also at check-out.

The front door is always locked and can only be opened by the receptionist or by using a code, which is given upon check-in. The dorm was also locked by a code.

To sum it up, Jerusalem Hostel keeps its rustic appearance from the 20th century. There are plenty of old photos on the walls of the hostel, and the carpets on the floor also look like they’re ancient. When you step on the floor tiles, you can feel some of them are shaky. There’s also a beautiful curvy staircase leading to all three floors, the entrance, the room’s floor, and the rooftop terrace. If you have a mobility problem or don’t like walking up and down stairs, this isn’t the place for you. But if you don’t have a problem with stairs and rustic surroundings, you might find this hostel very special. I hope my review of the Jerusalem Hostel was helpful to you!

Looking for a tour guide in Jerusalem? I might be available. Send me an email at lior@backpackisrael.com.

Where to Stay in Tel Aviv? (For Budget...

The Spot Hostel: It’s a Cool Place in...

Off the Square: A Cute Guestroom in Safed’s...