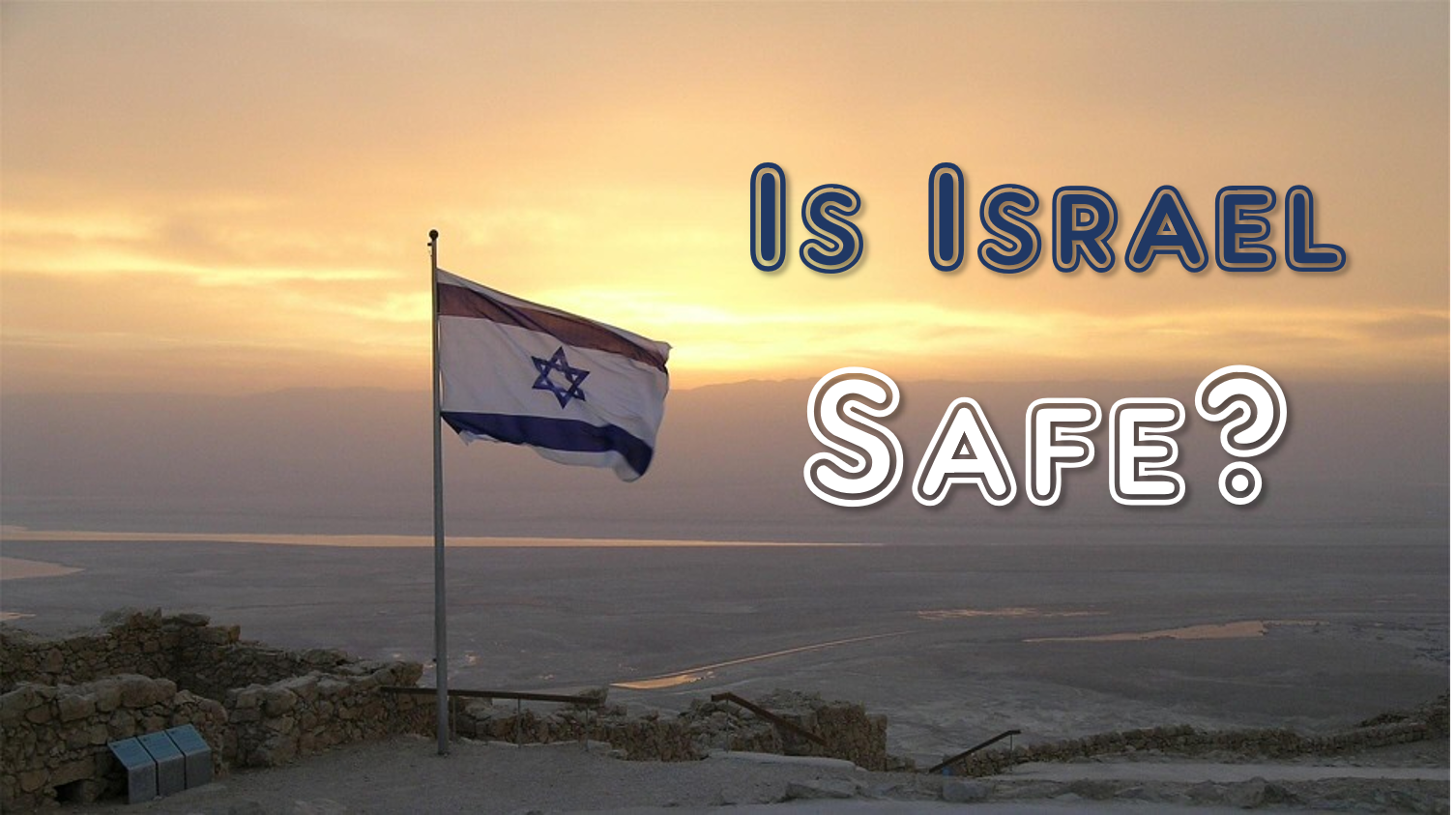 One of the questions that I see again and again in different travel forums is – “Is Israel Safe to Visit?” I’ve been operating this blog for over three years now and I think it’s time to answer the question. Is Israel safe to visit? In short – yes. And in more detail, here are some questions you might ask about safety and security in Israel and my answers to them.

Is there a lot of crime in Israel?

“Israel’s criminal incident rate per capita is lower than in many major cities in the U.S.” – says the OSAC Israel 2018 Crime & Safety Report. I have lived in Israel almost my entire life and have experienced ALMOST no criminal activity. Street crime is very low. Though, like in any foreign country, it’s important to keep your valuables in a safe place. Also, don’t give any personal information to unauthorized personals. Police presence is very tight in tourist areas such as the Old City of Jerusalem and the main areas of Tel Aviv. So, if you do need any help, you can easily reach out to them.

In 2022, my credit card and money were stolen while taking a bus ride from Eilat to Jerusalem. I wasn’t feeling so well and left my bag unattended for a few minutes, and the thieves took advantage of that. So, I recommend taking care of your valuables at all times. Also when you go to the beach, try to keep your eyes on your valuables or even better, not bring them to the beach. On the beaches of Tel Aviv, there is a problem of thieves.

If you are using a rented car while visiting Israel, don’t leave any valuables inside. There is a problem of people breaking into cars, especially in East Jerusalem, Tel Aviv, and remote places in the Judean Desert.

I’m a woman traveling to Israel alone. Should I worry?

No, don’t worry. Israel is very safe for solo female travelers. I myself am a woman and I’ve never felt scared to wander around. Though, you should be aware of some things which can make your trip much easier and safer:

Why are there so many soldiers everywhere?

In Israel, you’ll probably see a lot of soldiers walking around in their uniforms. Sometimes, they’ll even be holding on to a rifle. This is a very normal, everyday sight in Israel. In Israel, men and women have to join the IDF (Israel Defense Force) after high school and serve the country for 2 to 3 years. I have also served in the IDF. You’ll see the greatest amount of soldiers on Sundays when they come back to their army base after a weekend at home. You’ll also see a lot on Thursdays when they leave for a weekend at home.

Are there a lot of terror attacks in Israel?

Israel knows how to deal with terror very well. Actually, we are one of the leading countries in the prevention of terrorism. We’ve seen terror of all kinds – stabbings, cars running over people, suicide attacks, shootings and even burning balloons. But in the last couple of years, there have been very few terror attacks. There have been much more deadly attacks in places outside of Israel, such as Sri Lanka and France. Israel’s Intelligence unit prevents many attacks and there are security checks almost everywhere. Usually, these checks catch terrorists before they even get close to their target.

Also, many people in Israel have served in the past as combat soldiers. They were granted permission to carry a weapon after they left the army. So, most terror attacks were usually cut short by former Israeli combat soldiers, that were in the area. They were able to shoot at the terrorist before he or she was able to expand their attack.

So are there many terror attacks in Israel? No. (at least not in 2018-2021). And you should note that most attacks are directed at locals and not at tourists, which isn’t fun, but at least you’re on the safe side,

There’s a rocket attack on Israel. Should I cancel my visit?

No, don’t cancel right away! Wait for a few days to see how things develop. Once in a while the terror organizations in Gaza Strip, usually Hamas, decide to shoot rockets at Israeli civilian areas. Sometimes they send only one rocket. Sometimes they send dozens or hundreds of rockets. In the second case, they usually ask for a ceasefire after a day or two and Israel usually agrees. That’s because we don’t want it to expand to a broad military operation. If it doesn’t expand to a military operation, you can feel safe to visit. Usually, there’s a long gap from one rocket attack to the other. Even if you’ll arrive and there will be a rocket attack, usually it does not reach the top touristic areas.

In the pic below you can see the rocket ranges of Hamas and other terrorist groups in the Gaza Strip. The area in the immediate range is not touristic at all and is actually “off the beaten path”. The area which is white-grayish is rarely targeted by the terrorist groups in Gaza. Though, it does happen once in a while that they fire a rocket to Tel Aviv or Jerusalem.

If you happen to be in Israel and hear a rocket siren, you should do as others do around you. Hopefully, they will be doing what they are supposed to do. Find the bomb shelter closest to you and stay there for 10 minutes after the siren before coming out. If there’s no bomb shelter nearby, lay down on your belly, cover your head and neck, and pray that a rocket won’t fall next to you. Most rockets are destroyed in the air by our Iron Dome system before they even hit the ground.

What about coronavirus? It’s under control?

Right now – November 2021 – Israel has the coronavirus under control. Most Israelis are fully vaccinated with three doses. Though people still need to wear masks in indoor places, and there’s the Green Pass. The Green Pass is issued for people who have taken three doses of the vaccine and prevents other people from entering many places. Hospitals are under control. And it seems like things are almost back to normal.

If you plan to visit Israel during this time, go over the guidelines to enter and leave Israel under coronavirus regulations.

So let’s get back to the first and main question – Is Israel safe to visit? Yes, it is. Like in every other country you’ll visit, you just need to make sure to be a bit precautious and keep an eye on your stuff. Though, I do suggest checking travel alerts before coming, just to be on the safe side. Check out the alerts on the U.S Embassy in Israel page.

Want to plan a trip to Israel and don’t know where to begin?

Check out my trip planning service for Israel.

Have a safe journey to Israel!

Where to Eat in Jerusalem? Here Are My Favorite Budget Restaurants

Jellyfish in Tel Aviv: When and How to...

It’s so interesting that you say yeah it’s safe, there’s only missiles every so often! Thanks for this

[…] If you happen to hear about a missle attack on Israel in the news and wondering if you should cancel you’re trip, don’t cancel right away. In most cases, these missle attacks end after 2-3 days and we reach a ceasefire. So is Israel safe? Yes it is. Here’s the full post – Is Israel Safe to Visit? […]