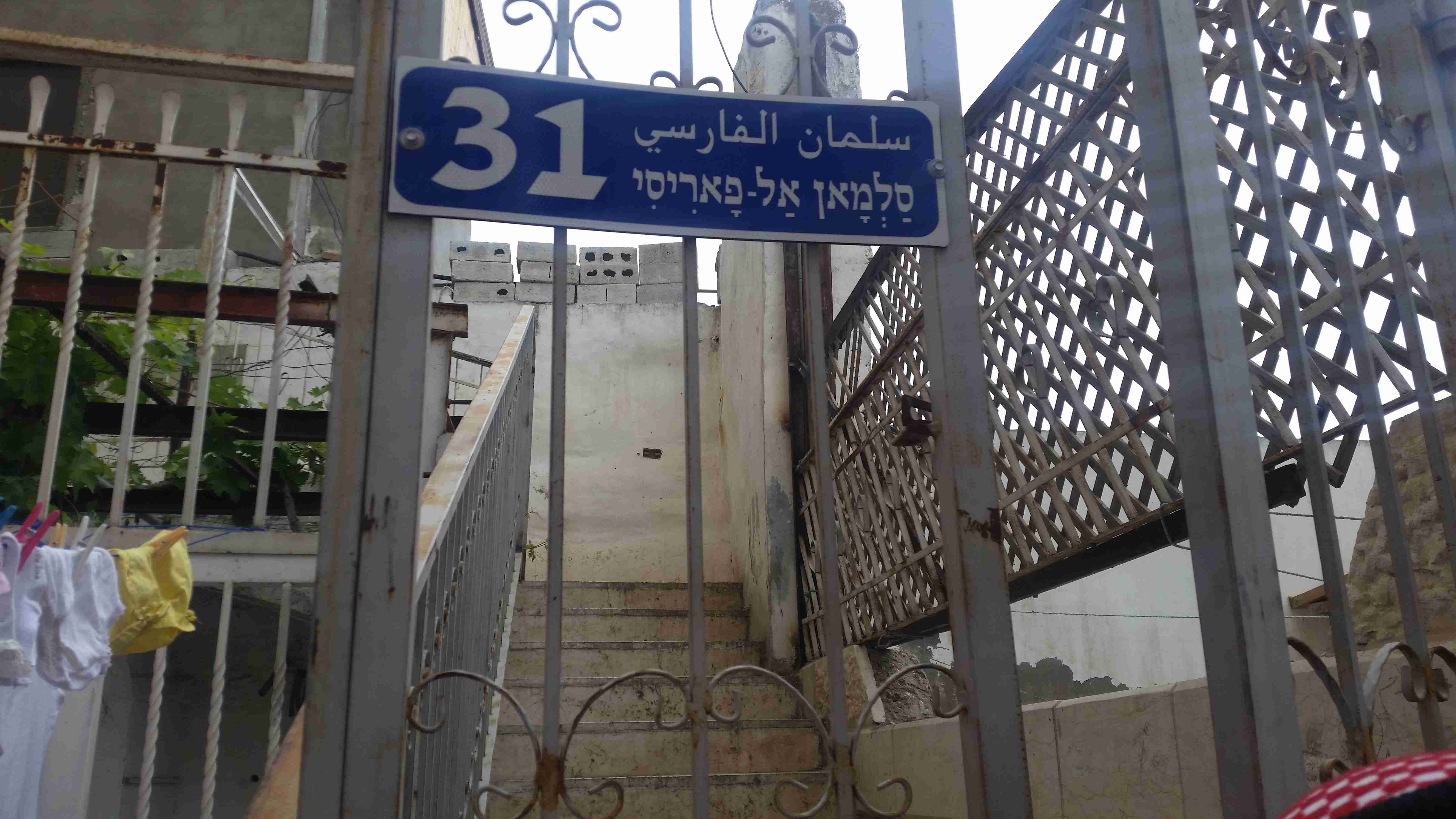 I want to share with you one of the greatest experiences I’ve experienced lately. A few weeks ago I’ve started working with a friend of mine on a new Pilgrimage trail to Jerusalem. He suggested that the trail will pass through the Arab neighborhood, At-Tur, situated on Mount of Olives. “But besides the trail, I want you to meet someone I know,” he told me. I didn’t know who will it be, but I said, “Sure, I’m always happy to meet new people.”

This person lives in At-Tur. At-Tur is an Arab neighborhood in the eastern part of Jerusalem. If my friend hadn’t come with me, I wouldn’t have gone there as an Israeli Jew. People imagine Eastern Jerusalem as scary. We hear that the Arabs there don’t like us, that it’s dangerous to walk there, because they might throw stones on us or hurt us in some other way. Egged buses refuse to drive up there, because there were times that some of the neighborhood’s residents threw stones on their buses… So, yeah, I wouldn’t have gone there. But I figured it would be a great chance to see what is really happening in At-Tur if I go with my friend.

We drove up there with his car. The streets looked fine. I was expecting something worse. Maybe it is a bit greyer than the rest of Jerusalem, but nothing too awful. Kids were making their way to their schools. Kids were the main ones on the street. Then we entered a side street and parked someplace. We walked a bit to the house, which is located at 31 Saleman Al-Farisi Street (סלמאן אל-פאריסי), went up the stairs and knocked on the door.

Someone opened and my friend asked: “Is Ibrahim here?”

“No, he is not here. You should call him,” answered that someone.

My friend gave Ibrahim a call and Ibrahim said he’s on his way. So we entered the house to wait for him inside. And WOW! What a house! It isn’t grand, but it’s beautiful. The walls are covered with pictures of Ibrahim, his family and people he met throughout the years, including all kinds of peacemakers. Stickers bearing the slogans, “Will work for PEACE”, “May Peace Prevail on Earth”, “Yes to Coexistence, No to Violence” decorate the walls as well. Letters to Ibrahim are also everywhere…  There’s a huge dining table in the middle of the room. One of the dwellers of the house asked us if we would like tea while we wait. 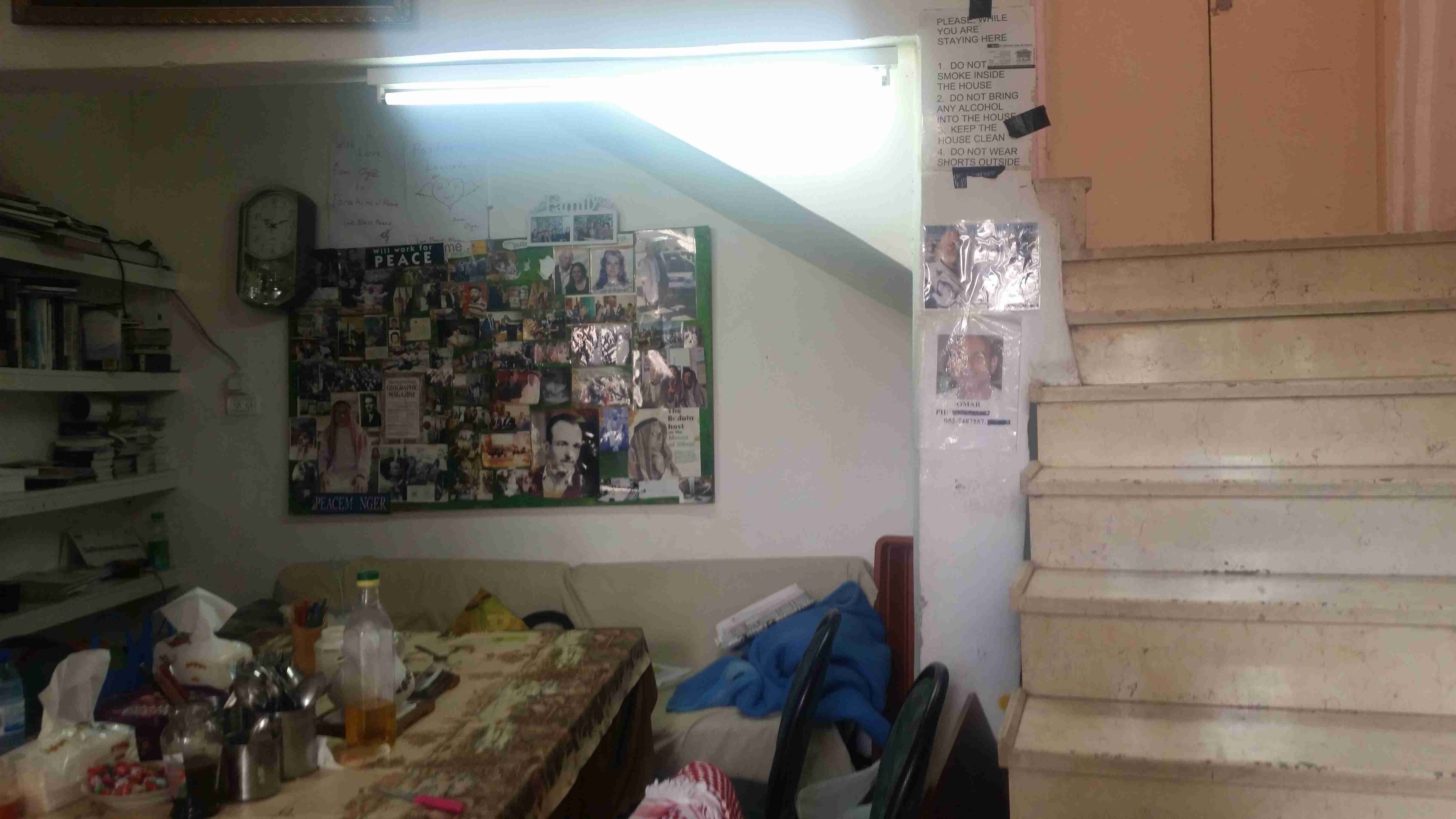 And we waited, sipping tea, until finally the door opened and an elder man with a red keffiyeh entered, one small step at a time. He looked at us, spread his arms wide and said with a wide smile: “AHLAN WA SAHLAN!” which means “Hello” or “Welcome” in Arabic. My friend hurried to greet him and I came up to him, too. We shook hands and I immediately felt welcome.

We sat and had a long chat. Ibrahim told me about his life, how he believes in peacemaking, about the need for people to learn about one another and become brothers and sisters. He talked about the peacehouse also. It’s a house he opened about 40 years ago for travelers or people who had no place to stay while in Jerusalem. People who come pay whatever they can afford. Some don’t pay at all.

As we were talking, the dwellers of the house started sitting around the table. It was morning, so they came for breakfast. One of the people who stays in the house is Irina. She came to the peacehouse about 3 years ago, stayed until today and helps Ibrahim run the place. She made a huge tray of pasta and said to us: “Eat!” Ibrahim nodded and said: “EAT!” as well, so we ate and had some coffee…

“I’m afraid I might have to close the house,” Ibrahim said, “I’m in debts and barely have the money.” He built a house for himself and his children and grandchildren. Getting building permits in Eastern Jerusalem is a difficult procedure, so many of the Arabs there decide to build without permits and hope for the best. Ibrahim also built without permits and then found out that the fine was huge – 75,000 dollars! Now he is struggling to pay the fine and keep the peacehouse operating.

He shared some more troubles. Like many other Arabs in Eastern Jerusalem, Ibrahim doesn’t have an Israeli passport nor citizenship. He has a Travel Document, that looks like a passport, but isn’t really one. The Travel Document was first issued in 1942, when the British ruled Jerusalem. He showed me the document he has today. Next to Nationality is written “Jordanian” and next to Place of Issue, “Israel”. “I’ve been arrested many times while travelling around the world, because the people at the airport thought that my Travel Document was suspicous,” he laughed. Without an Israeli citizenship he can’t vote for the Prime Minister of Israel and he can’t leave the country for over a year and then come back to live here.

“I sent two of my children to study abroad,” he told me, “And when they finished their studies and wanted to come back to live in Israel, the government said they can’t. They can only come to visit, but can never live here again.”

So it was an interesting talk. I have never imagined I would be able to sit and talk with an Arab Palestinian living in At-Tur in Eastern Jerusalem, in a beautiful peacehouse surrounded by travelers and people from all over the world.  When I came back home, I wanted to learn more. I searched for stories on Ibrahim Abu El-Hawa on the web. Then I got to this site, Peace for Ibrahim. People can read Ibrahim’s Peacehouse story and donate if they want.

I’m attaching a video about Ibrahim’s Peacehouse from 2011. Things have changed a bit. Ibrahim is still standing, but is having a hard time walking. The house has been refurbished and repaired a bit. The restroom looks much better today than in the video. There’s also a wonderful rooftop, with views towards Augusta Victoria. This house is so peaceful, literally. 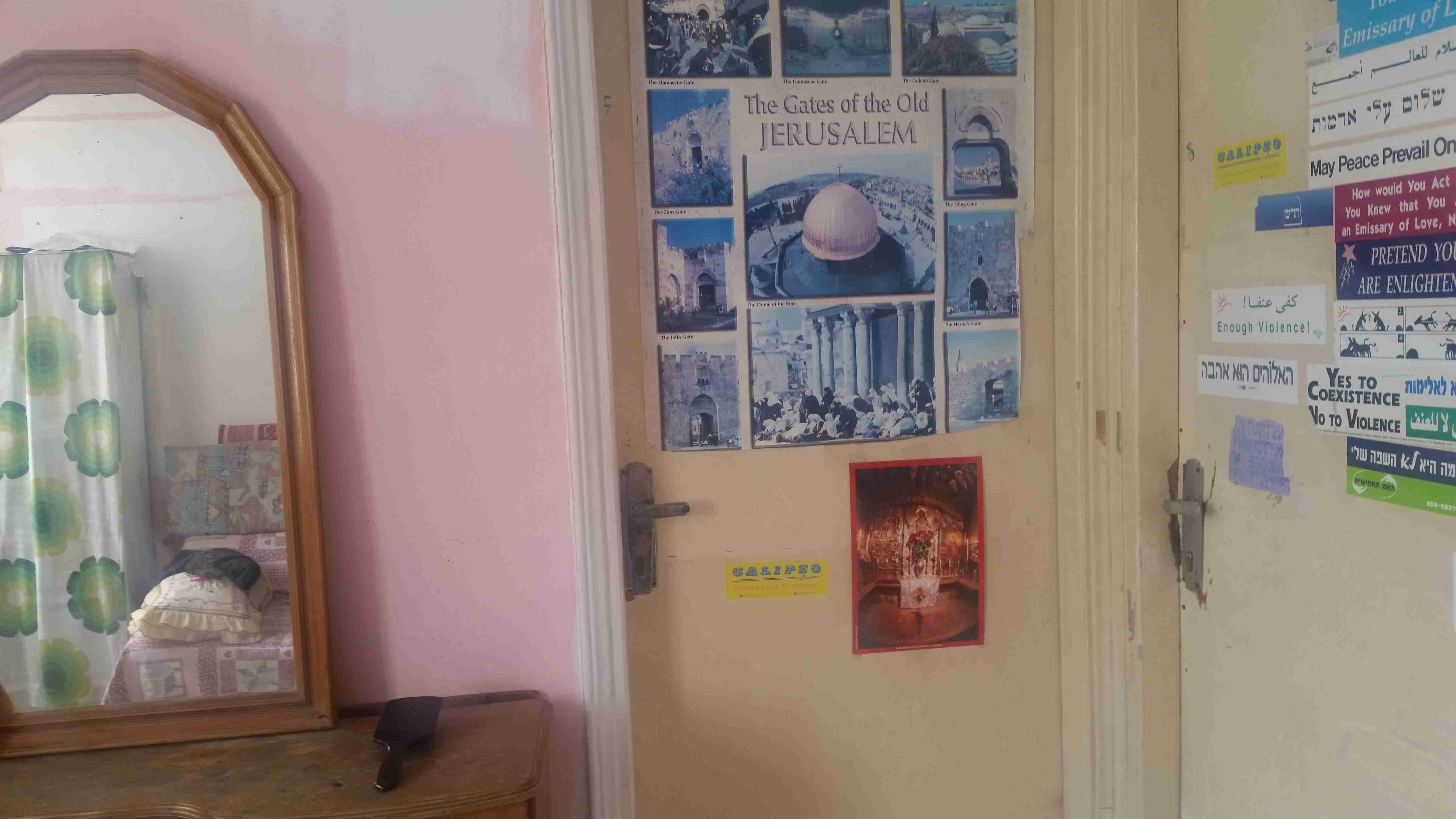 You’re welcome to come and visit the Peacehouse and see it for yourselves. The address is סלמאן אל פאריסי 31 in the At-Tur neighborhood on Mount of Olives. The door is always open, literally. You can come to chat with the people, eat or stay. If you want to check beforehand if there are available places or set up a meal, you can contact Irina at +972-503077383. And don’t forget to leave a donation!

Top Free Things to do in Eilat

This is really inspiring ?… Thank you soo much for sharing!

Thank you Abdul! I’m happy this inspires you 🙂 It sure inspired me!

I Can not believe I came across this Blog! This is fantastic! I stayed there for Two Months in 2018 during Ramadan, it was a very unique experience and Abdul and his grandson were some of the best people Ive ever met. They are willing to help and take people in with so much grace in their beautiful soul and he also has plenty of stories and he is also very well known and social in the streets.

I Can not believe I came across this Blog! This is fantastic! I stayed there for Two Months in 2010 during Ramadan after completing as volunteer in Almog Hotel. it was a very unique experience and Abdul and his grandson were some of the best people Ive ever met. They are willing to help and take people in with so much grace in their beautiful soul and he also has plenty of stories and he is also very well known and social in the streets.

I pray to God that He helps Ibrahim to raise money to pay debts. I ask all to pray for this also. Blessed man, long live!