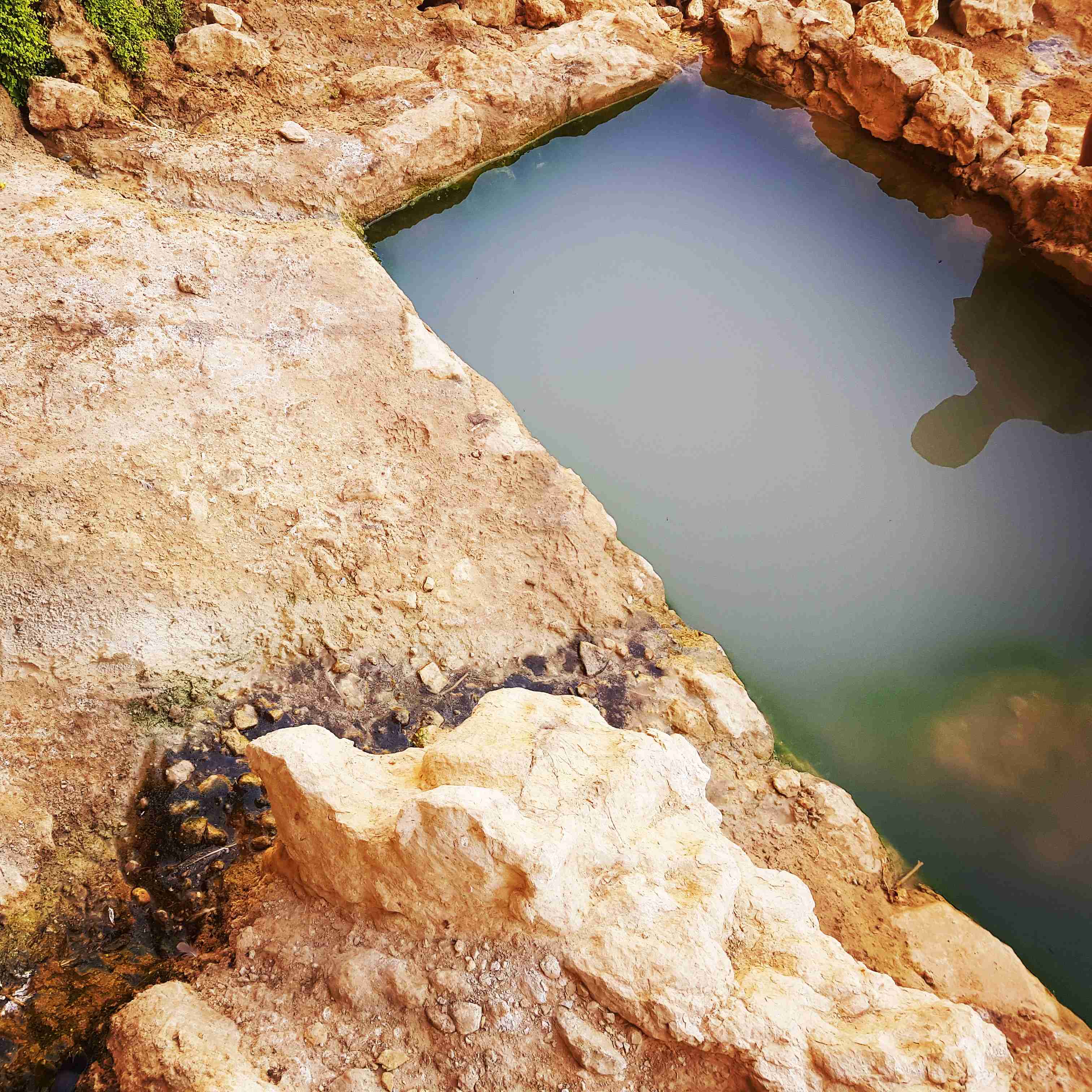 On the last day of the Passover holiday, my family and I drove up to the Eilat Mountains to try one of the many hiking trails, which we haven’t tried yet. We chose to hike the circular trail to En Netafim, which partly overlaps the Israel National Trail. It’s a 3.5-km trail, that takes you down to the small and beautiful Netafim Spring, called En Netafim in Hebrew (“En” means “Spring”), and then back up to the starting point. I really loved the view of the desert around us and am not surprised that part of this trail was combined in the Israel National Trail. The hike takes about 2 hours and includes some descends and ascends which are a bit challenging, especially for those who are afraid of heights.

Before I start telling you about the trail itself, let’s go over safety instructions and general notes:

* The hike is under your own responsibility, so please be careful, especially when you are standing next to the cliff that’s along the trail.

* Make sure you hike with good hiking shoes, have at least 2 liters of water and wear a hat. It is recommended to also pack snacks if you want to stop somewhere, BUT make sure to bring a garbage bag as well and take your garbage with you.

* Pay attention to sunset hours (in Summer around 6-7 PM, in Winter around 4-5 PM) and begin your hike at least 4 hours before sunset.

* During the rainy season, check for flood hazards after every rainfall. If there is a flood hazard, do not hike in the mountains area. Also, do not attempt to hike this trail right after rainfalls, as it can be slippery.

* The water in the spring basin is not good for drinking or bathing.

* This trail involves many climbs and descends, so if you are not fit for this kind of hiking, don’t attempt to hike the trail.

* Those afraid of heights might get afraid at some points along the hike.

* The phone signal is bad in the mountains area and sometimes non-existent. Though, I was able to get a phone signal down at the spring.

Before the hike – a bit about En Netafim:

En Netafim is a special point in the Eilat Mountains, as it is the only spring in the area, which flows all year round. Many desert animals stop by the spring to drink and refresh themselves during the early morning and twilight hours.

How to get to the head of the drail?

The easiest way to get to the head of the trail is by car. We used our car to get to the trail and parked next to its head. But if you don’t have a car or don’t have enough budget for renting one, you can get on Egged bus number 392 from Eilat Central Bus Station and get off at the fourth stop, called “Ma’avar Netafim” (מעבר נטפים). It should take about 15 minutes by bus. Make sure to tell the driver you want to get off at this station. Keep in mind that the bus does not operate on Fridays and Saturdays (there’s no public transportation on Shabbat). From this station, you can walk south along road number 12 for about 1.5 km – about 20 minutes – until you reach the trail end. It should be to your left and there should be a road sign pointing towards it, saying “En Netafim” (עין נטפים).

The trail begins opposite of Mount Yoash (1) as a wide dirt road, that descends down towards Wadi Netafim. Every trail in Israel is marked by a specific color. This part of the trail is marked by the black color and also by the orange-blue-white mark, which is the color combination of the Israel National Trail.

We continued along this trail for about 1 km until we got to a big sign, warning about the cliff up ahead and prohibiting the lighting of fire in the area. A few steps ahead there’s a crossroad of trails (2). We continued straight on the green marked trail, which is also part of the Israel National Trail.

We continued a few steps along this trail and then got to the cliff’s edge (3), where a horizonal bar is blocking the wrong way down the cliff. There are two narrow descends here that require using some step bars, which have been installed into the rocks. We climbed down carefully through the narrow opening, passed one descend and continued right away to the second, which is actually a pile of stone boulders, which have collapsed from the cliff and created a convenient way down the cliff.

After the descent, we continued on the green-marked trail until reaching a shady spot (4), where we stopped to drink water. My father looked at his map, looked around, and said: “This is supposed to be the place of the spring.” Then he pointed at a wet spot on the ground and said: “Well, this is the spring. It’s supposed to be small.” I said: “It can’t be. Do you really think any animal can drink from this tiny spot of water?” “Maybe it’s dried up,” he shrugged and then pointed at the green foliage at the base of the cliff: “Look, it’s enough for the plants.” I saw an opening in the cliff, right where the foliage was situated. “Maybe the spring is inside the opening?” I suggested and started climbing up to the base of the cliff. A few steps up and I already spotted the artificial basin, which was created here by the British in the 1930s to keep the water of the spring and repaired by the Eilat Field School staff in 1968. The animals which live in the area, amongst them the ibexes, come to the basin to drink water. Though, for us, the water is not good for drinking. In the 1980s, the spring’s water turned suddenly very salty. It’s also not good for bathing. The source of the water in the basin is from the En Netafim spring, which emerges as little drops of water from the rocks of the cliff. “Netafim” in Hebrew means “drops”.

The black-marked trail continues along a quite wide dirt trail, that is very exposed to the sun. To the right, you’ll see part of Wadi Netafim, which is almost always dry but still quite beautiful. After a while, the trail begins to ascend toward the top of a saddle (7). The ascend is quite steep but goes on for only about 300 meters. At the top of the saddle, the wind is very mighty. We took a few minutes to rest at the top and then continued downwards. The descent is also quite steep, so we walked down step by step.

We continued on the black marked trail, which continues on a rather flat surface, until we got to the Mount Yehoram Camping Site (8). From there, we took the dirt road that turns right and walked along it until we reached road number 12 after about 200 meters (9).  We crossed to the other side of the road and continued right in the direction of the trail head, where we left our car. We continued along the road for about 600 meters until we reached the point where we started.

It was a very nice trail, with beautiful landscapes and some nice climbs. We were sorry it didn’t last a bit longer!

How much time does the trail take? About 2-3 hours.

Difficulty: Mid to high level of difficulty due to the steep descends and ascends, which sometimes require climbing.

It is a 3.5-km circular trail with some steep descends and ascends along the way.

When is the best time to hike? Spring (March to May) or Autumn (October to December), when temperatures are mild.

I wish you a great hike in the Eilat Mountains.

Top Free Things to Do in Jerusalem Old City