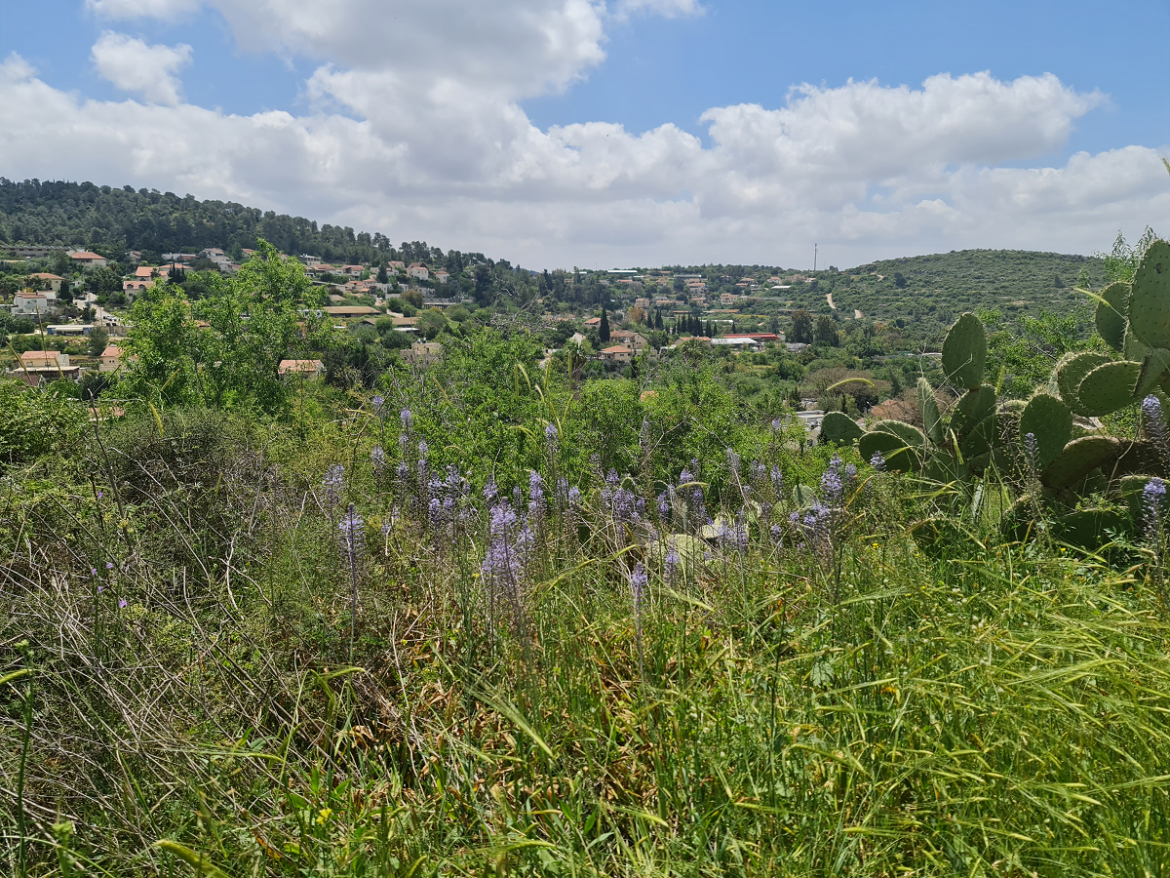 After a long break from the Israel National Trail, we returned for another segment, this time from Ein Kobi to Netiv HaLamed Heh. This segment is very easy but mostly exposed to the sun. It goes on a wide dirt route and barely has any ascends or descents. And almost all the way, you can enjoy the beautiful green views of the Jerusalem Hills. So, if you’re looking for an easy and beautiful trail near Jerusalem – this could be it.

Trail length: About 19.5 km. You can also hike it in the other direction.

Trail duration: Around 7 hours, depending on your pace.

Stay options at the end of the trail: I saw someone with a tent next to the HaLam Heh Memorial, but I’m not sure if it’s an ideal place for camping. It would be better to look for a Trail Angel in “Netiv ha-Lamed-Heh”.

View the full trail on a map here.

Read >> My full guide to the Israel National Trail.

· The hike is under your full responsibility, so please be careful.

· Make sure you hike with good hiking shoes, have at least 3 liters of water, and wear a hat. Pack food and snacks for a full day of hiking. Also, make sure to bring a garbage bag as well and take your garbage with you, including toilet paper.

· Don’t go on the hike when it is too hot (over 30 degrees Celsius) because it’s not enjoyable and can end with heatstroke. Most parts of the trail are exposed to the sun.

· Pay attention to sunset hours (in Summer around 6-7 PM, in Winter around 4-5 PM). It’s best to start hiking around 6 AM. This way, you will have time to rest in the hot hours of the afternoon and get to the end of the trail before sunset.

· The phone signal is good throughout most of the trail.

· Before you begin the hike, make sure you have a good trail map. The trail isn’t always well marked, so it’s good to have a map. You can also use a navigation app such as the Israel Hiking Map. With GPS, you can also see where you are exactly. Though, remember that wherever you do see a trail mark – this trail mark is superior to what’s shown on your map.

· The trail is marked with the Israel National Trail colors, orange-blue-white. It overlaps other trail with different colors.

· If you need any further help planning your trail, I recommend posting on the Israel National Trail forum on Tapatalk. Of course, you can also talk to me through lior@backpackisrael.com.

BUT it is possible to reach the trailhead by public transportation. From Jerusalem, you can take Kavim bus number 290 or 291 from “ICC Jerusalem/HaNassi HaShishi” station and get off at ” דרך האר”י/ כביש 375″ station. Then, cross to the other side of the street and take bus number 136, 138, or 455 to the “Mevo Betar Intersection” station. From there, you will need to walk about 20-30 minutes to Ein Kobi. Overall, it should take you about one hour to arrive.

The hike from Ein Kobi to Netiv HaLamed Heh

We started our day at Ein Kobi (1). It’s an underground water spring, located in Britannia Park. Some of us climbed down the ladder and crawled through the pitch-black tunnel to see it from up close. I preferred to wait outside. Later, I found out that you can get to the spring from the other end of the tunnel, where you don’t have to crawl.

After my friends had fun in the tunnel, we got on the Israel National Trail and started walking. The first part of the trail overlaps a black-marked trail. It’s a wide dirt trail, overlooking the beautiful green landscape of the Jerusalem Hills. Here and there, there were even flowers!

After about 1.7 km, we reached a signpost showing a trail intersection (2). We turned left with the Israel National Trail, still overlapping the black-marked trail. The trail continued through the green scenery on this black-marked trail for about 1.6 km. Then, we turned right onto a blue-marked trail (3).

We started with a mild ascend and then started descending a bit. But nothing major. After about 750 meters, we turned left with the Israel National Trail (4) and passed by what seemed to be an abandoned farm. Right after the farm, there was a confusing point where we saw a trail mark that pointed to the right. We took that right turn and ended up doing a circle and returning to the same point. So, then we looked at the map and saw that we were supposed to go straight. Soon enough, we saw a trail mark straight ahead, on an electricity pole next to the road.

From the road to Ein Mata

We went all the way to the electricity pole and then turned right, climbed up to the road, and crossed to the other side. After crossing the road, we continued a bit more, passed another small road, and then stopped for breakfast and coffee. In the near distance, we could see an old building with a white dome (5). According to Amud Anan, it’s a SHehkh’s tomb, but it’s unclear who is buried here exactly.

We continued on a black-marked trail and then turned right onto a blue-marked trail (6). It’s a trail completely exposed to the sun. After about 2.7 km, we reached an intersection with the black-marked trail (7). We continued down on the blue-marked trail. From here, there’s a short steep descent and then the trail continues descending mildly. On the way, we stopped to look at Mata, a village with some really fancy houses. We looked at their private swimming pools and thought that we could have used some time in the cool water. It was HOT.

The blue-marked trail went on for about 1.5 meters. Then, we arrived at a beautiful grove of palm trees (8). We stopped to make some photos. And then, started looking for Ein Mata, the water spring that was supposed to be next to the palm trees. But all we found was a puddle of dirty water that was not at all inviting.

Disappointed, we headed on.

From Ein Mata to the underpass

We switched from the blue-marked trail to a red-marked trail that went westward (9). If you prefer, you can take the other red-marked trail, that goes southward to Khirbet Hanoot, an ancient road inn. From there, you can get back to the Israel National Trail through a different trail.

But we didn’t go to Kirbhet Hanoot. We continued about 2.2 km on the Israel National Trail, which first overlapped the red-marked trail and then went on its own. In the distance, to the left, we could see the tip of the Zanuah Quarry. You can clearly see the contrast between the beautiful green landscape and the yellowish quarry.

Then, we continued straight on the trail, which started overlapping a blue-marked trail (10). After about 3.2 km, we turned right onto a black-marked trail. Shortly afterward, we reached a beautiful field of what looked like wheat (11).

From the underpass to Netiv HaLamed Heh

After crossing the underpass, we ascended a bit and then stopped to rest under some shade. Then, we continued about 3.2 km all the way to Netiv HaLamed Heh (13). The trail is completely exposed to the sun, so we tried to walk it fast. We passed by groves of olive trees and enjoyed beautiful views on the way.

A short while before Netiv HaLamed Heh, there’s a huge satellite field to the left. The field belongs to RRsat and they use it to distribute hundreds of TV channels to houses all around Israel.

The trail doesn’t enter Netiv HaLamed Heh. It passes by the monument at the entrance to the kibbutz, that commemorates the memory of 35 Haganah fighters who were brutally killed by Arab-Palestinians. The group of fighters were on their way to resupply the blockaded kibbutzim of Gush Etzion but were attacked on the way. No one survived.

We left our car next to the monument, so we got into it, and left.

If you need to leave the trail by public transportation, you will need to carefully walk eastward alongside road number 375 and catch a bus at Etsyona Junction. You can take bus number 34, 35, or 409 from the junction to “Road 3855/Rabbi Yosef Caro” station. Then, switch to bus number 619 to Jerusalem.

If you left your car near Ein Kobi, you can catch bus number 132 from Netiv HaLamed Heh Junction and get off at the “Mevo Betar Intersection” station. Then, walk about 20 minutes to Ein Kobi.

It’s best to use Moovit or Google Maps to find the best way back to your destination.

The segment from Ein Kobi to Netiv HaLamed Heh is a beautiful trail, that passes through the green landscapes of the Jerusalem Hills. It isn’t very shaded, so if you want to really enjoy it – try to do it on a pleasant day.

If you need any help with planning this hike, feel free to contact me at lior@backpackisrael.com. I also offer guided hiking tours on several segments of the Israel National Trail.

How to Plan a Trip to Israel: 11 Important Steps

Narcissus in the Desert: A Hike for Flower...

Ein Prat: A Beautiful Walk in a Desert...

The Sea to Sea Trail: From the Med...