Hiking Down the Carmel Through Wadi Kelah and Galim 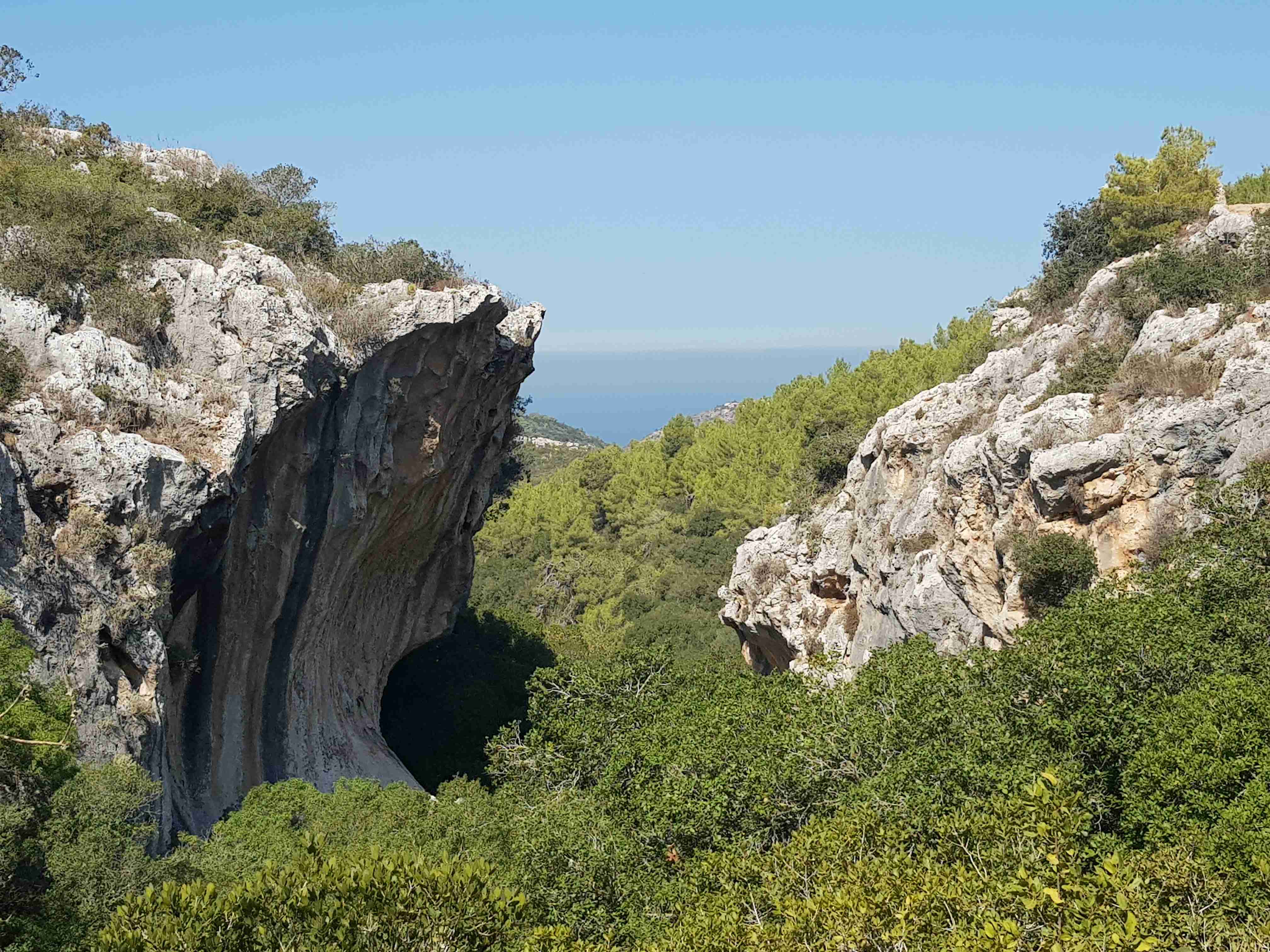 The Carmel is one of the most beautiful mountains in Israel, rising to a height of around 550 meters above the magnificent Haifa Bay. During Chol Hamoed Sukkot, my family and I decided to hike down part of the mountain, through the beautiful Wadi Kelah and Wadi Galim.

It is about a 6.5-km trail, that is perfect for a group of family or friends, looking for a trail that is a bit challenging, as it includes many parts that require climbing down bars (I don’t recommend bringing young children). The hike takes between 3 to 5 hours, depending on your fitness and the number of times you stop along the way.

This isn’t a circular trail, which means you can choose to climb up or down it. We decided to climb down, and there is a lot to climb! But before I start telling you about the trail itself, let’s go over safety instructions and general notes:

* The hike is under your own responsibility, so please be careful.

* Make sure you hike with good hiking shoes, have at least 2 liters of water and if you’re travelling during the summer, wear a hat. Most parts of this trail are shaded by the Carmel’s forest, but it is still important to be equipped with these items. This trail is full of stones and pebbles, so expect a bumby trail, unless you’re wearing really good hiking shoes.

* Always stay on the marked trail. The trail is marked all along the way in green, red, blue and black colors. A trail mark appears every few meters, so keep an eye out for them.

* Pay attention to sunset hours (in Summer around 5-6 PM, in Winter around 4-5 PM) and begin your hike at least six hours before sunset.

* Do not attempt to hike this trail after or during rainfall, as it can get very slippery and can be dangerous.

* There are at least five places where you will need to use bar ladders to climb up or down the trail. The climbs are very high. If you are hiking with children, make sure to secure them from behind as they climb up the ladder. Put your hands on theirs and secure their backs. Same if you are climbing down.

* During holidays and weekends (Fridays-Saturdays), this trail is usually full with groups of hikers, so if you don’t want to wait in line for the ladders, it is recommended to come here not during those times.

Now, after we’ve finished with that, let’s talk a bit about Wadi Kelah, which is part of a nature reserve. Wadi Kelah is a dry wadi, which makes its way through the chalky Carmel and flows into Wadi Galim, south-west of the Haifa University. Part of the wadi, where it is surrounded by cliffs, is called “Little Switzerland”, because it reminded some people of Switzerland’s landscapes (I don’t know if it resembles, because I’ve never been to Switzerland).

It is possible to hike Wadi Galim and Wadi Kelah in many different ways. There are shorter and longer hikes than the one we chose to hike. Our hike was about 6.5-km long and took us 3.5 hours to hike. 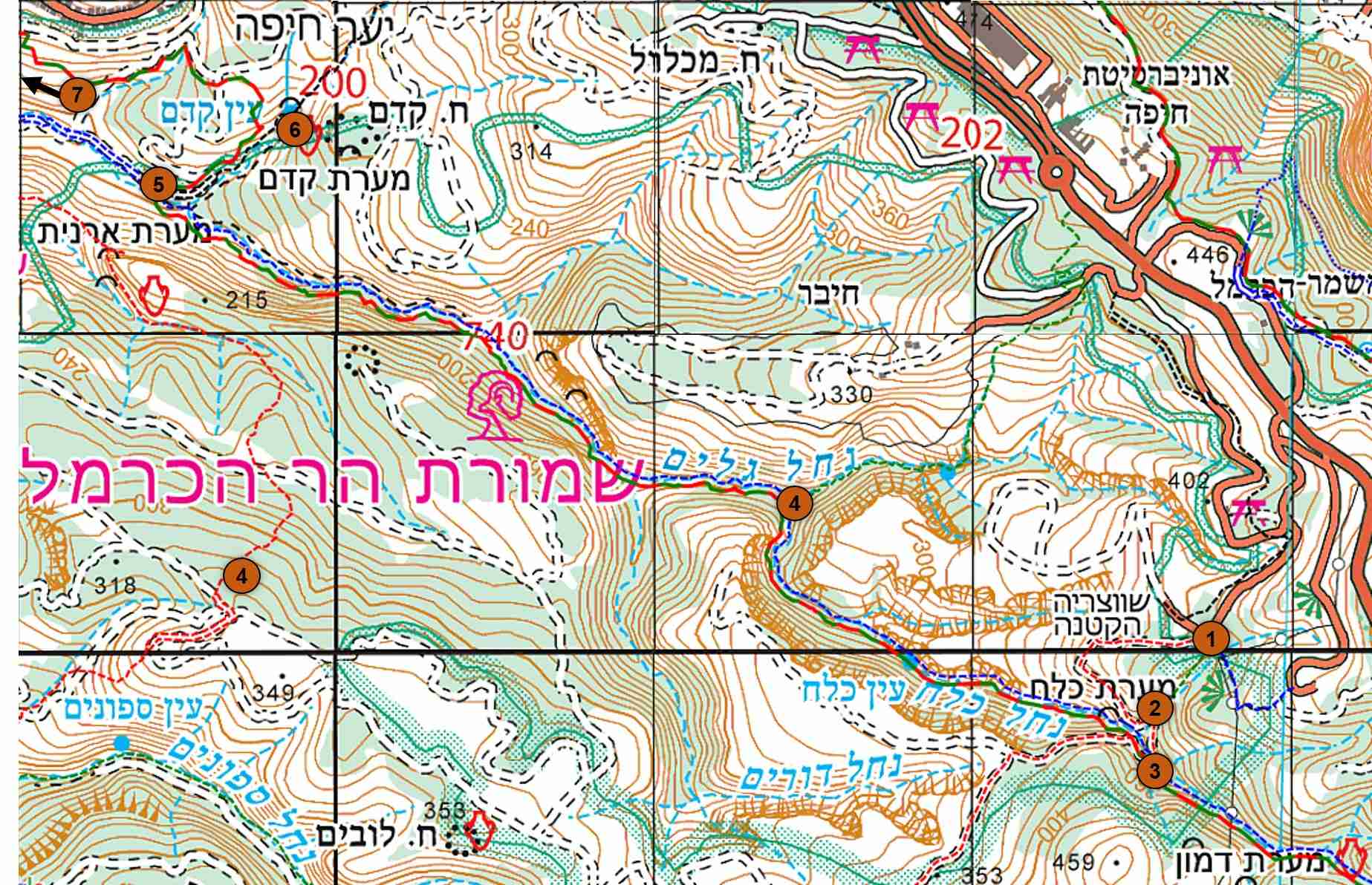 How to Get to the Head of the Trail?

The hike we chose to do begins at the Little Switzerland Parking Lot (in Hebrew: חניון שוויצריה הקטנה), which is located deep in the Carmel Park. One of our family members gave us a lift with her car to the head of the trail. That’s the ideal way to get there, but if you don’t have anyone who can give you a lift, you can either hike along the road to the starting point (about 2.5 km, 40 minutes’ hike) or start the hike near the entrance to the Carmel Park, near the Haifa University, on the green marked trail that goes down from the Upper Hai Bar Parking Lot. This trail will take you on a trail that is a bit different from ours. In this post I will focus only on our trail. If you want to get to the Carmel Park by bus, you can take any bus going to the Haifa University.

By the way, not far from the Little Switzerland Parking Lot is a night parking lot, which is good for overnight camping. If you want, you can come here in the evening, camp overnight and then start the trail early morning.

So we started our hike at the Little Switzerland Parking Lot (1). From there, we started descending in a green-marked trail, which includes two points where we had to climb down carefully (because they were a bit high). It’s best to get low, sit on the rocks and then climb your way down. 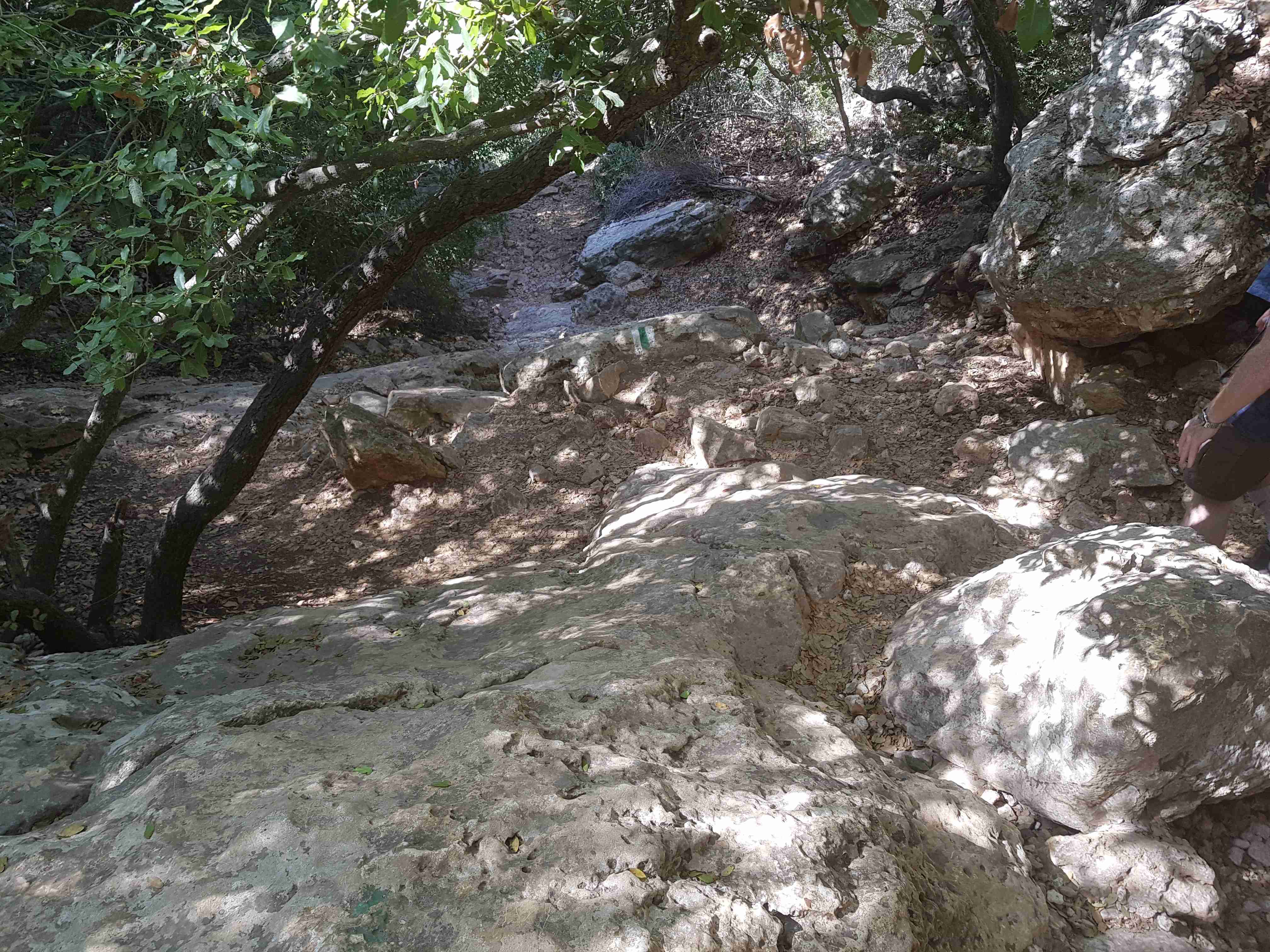 The beginning of the trail….

After we passed the second high descend, that is covered by tree roots, we went a few more meters and got to a fork in the trail (2). Here you can either turn right and return with the red-marked trail to the Little Switzerland Parking Lot or continue left, as we did, and hike a short distance to the bridge over Wadi Kelah. On the way, you can look to your right and see the beautiful concaved cliffs of the wadi (called “Tsnirim” in Hebrew).

The bridge was made by the British during World War II, as preparation for the possibility that the Germans will conquer the Land of Israel (which they didn’t do). At the bridge (3) there is another crossroad of trails. We got on top of the bridge and then descended to the right, on a steep climb climb along the blue-marked trail. The climb includes a bar ladder, so that helps.

From this point, the trail continues mainly in the amazing forest of the Carmel, inside Wadi Kelah. Along the way there are some steep climbs, which include bars. Also, there are some points where you leave the trees and get a bit of sun. If you’re lucky to be on the trail alone, you can listen to the life in the forest – animals walking through the bushes, birds chirping in the tree canopies and the wind quietly brushing the foliage. 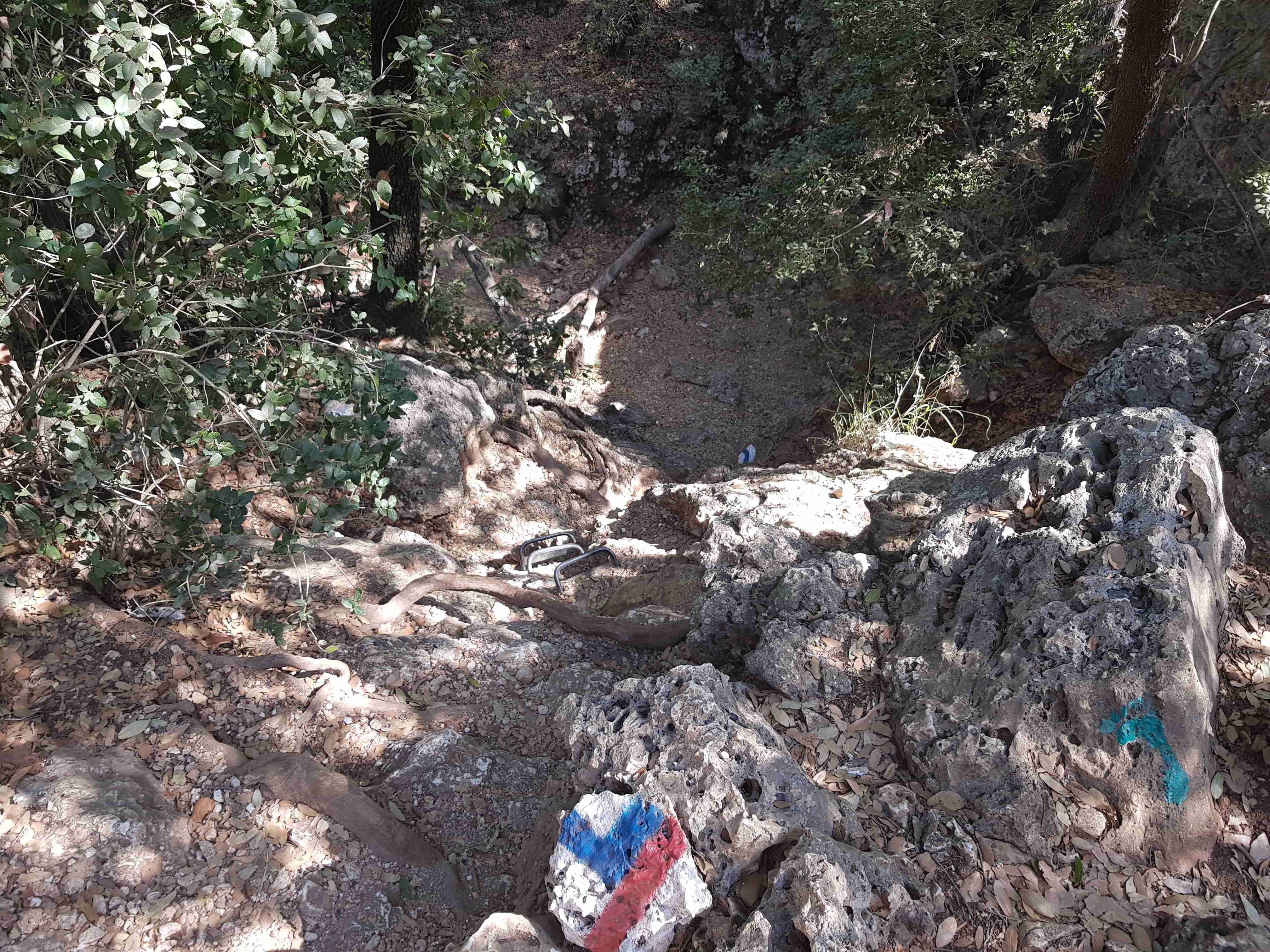 Descending from the British bridge 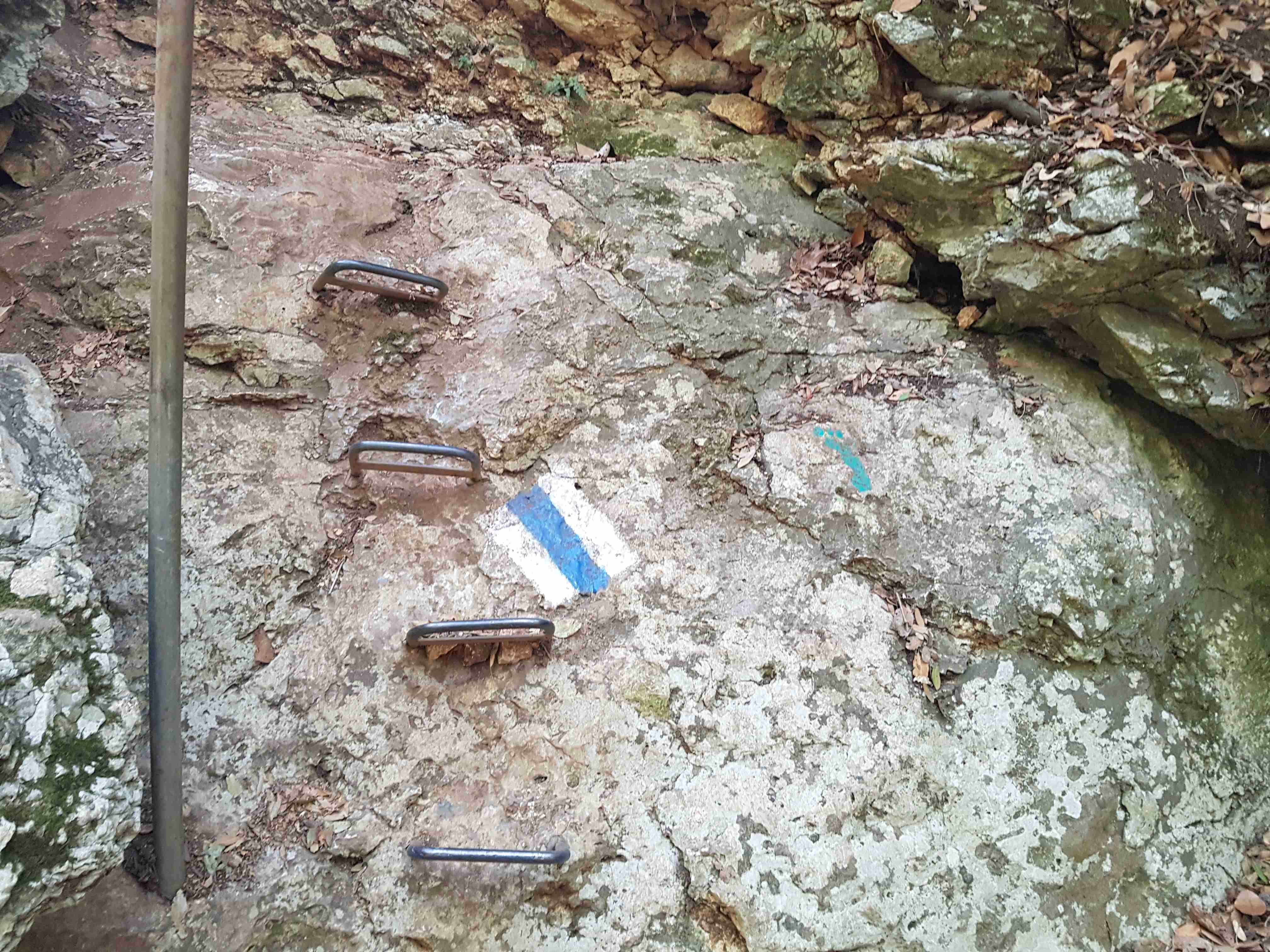 Some of the bars along the way…

After about one kilometer we arrived at another crossroad of trails (4), where Wadi Kelah meets Wadi Galim. If you chose to take the green-marked trail from the Haifa University, you as well will get to this point eventually. We continued left, on the blue-marked trail down Wadi Galim. 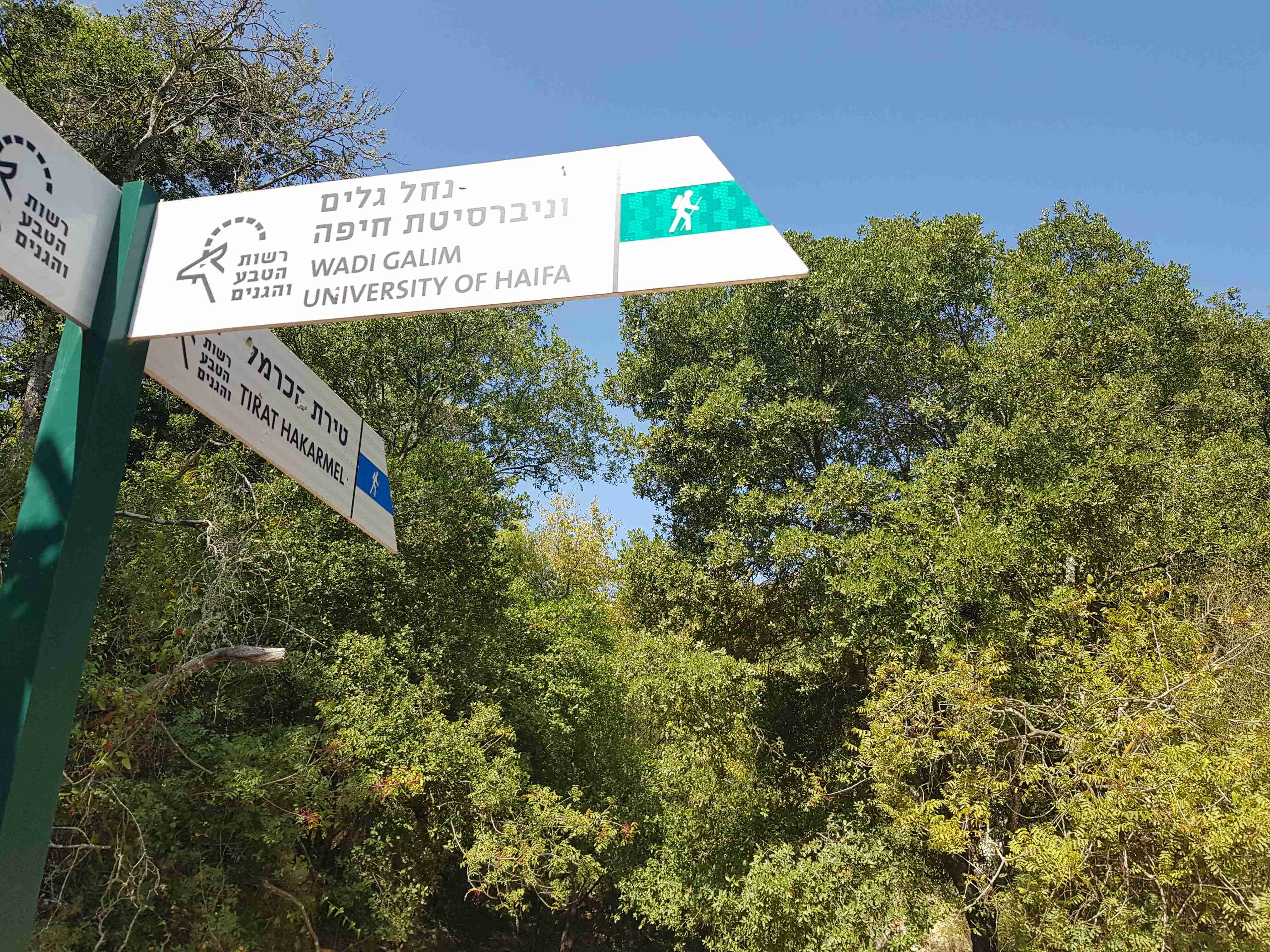 From this point, the wadi slowly starts to open and the trail becomes more exposed to the sun, although there are still some parts covered with the Carmel forest.

After about 2.5 kilometers and a few more high descends, we got to a very open space, where there are some trails going to different directions (5). If you look to your left, you will see a huge cave situated up above, called Oranit Cave. This cave was used in prehistoric times, because prehistoric tools were found inside it. Today, it is home to a large number of insect bats. From October to March the cave is closed to the public, because that’s the time when the bats enjoy their wintertime rest. It is possible to hike up to the cave on a trail that is not marked. You can see the gate that indicates the beginning of the trail, which isn’t long, but is a bit steep, so mind your steps.

It was very hot when we got to this point, so we decided to skip Oranit Cave and hike instead to a spring, that is situated about 400 meters away. We turned right on the black-marked trail and began hiking to the spring, called Ein Kedem (6). Because it was a very hot day, the spring was full of people. It was a fantastic spring, with very cold water! You can either walk through the spring’s tunnel or get into its pool, which is covered by a stone roof and is full of water! The water got up almost to my waist. It was a great way to cool ourselves down after the hike. 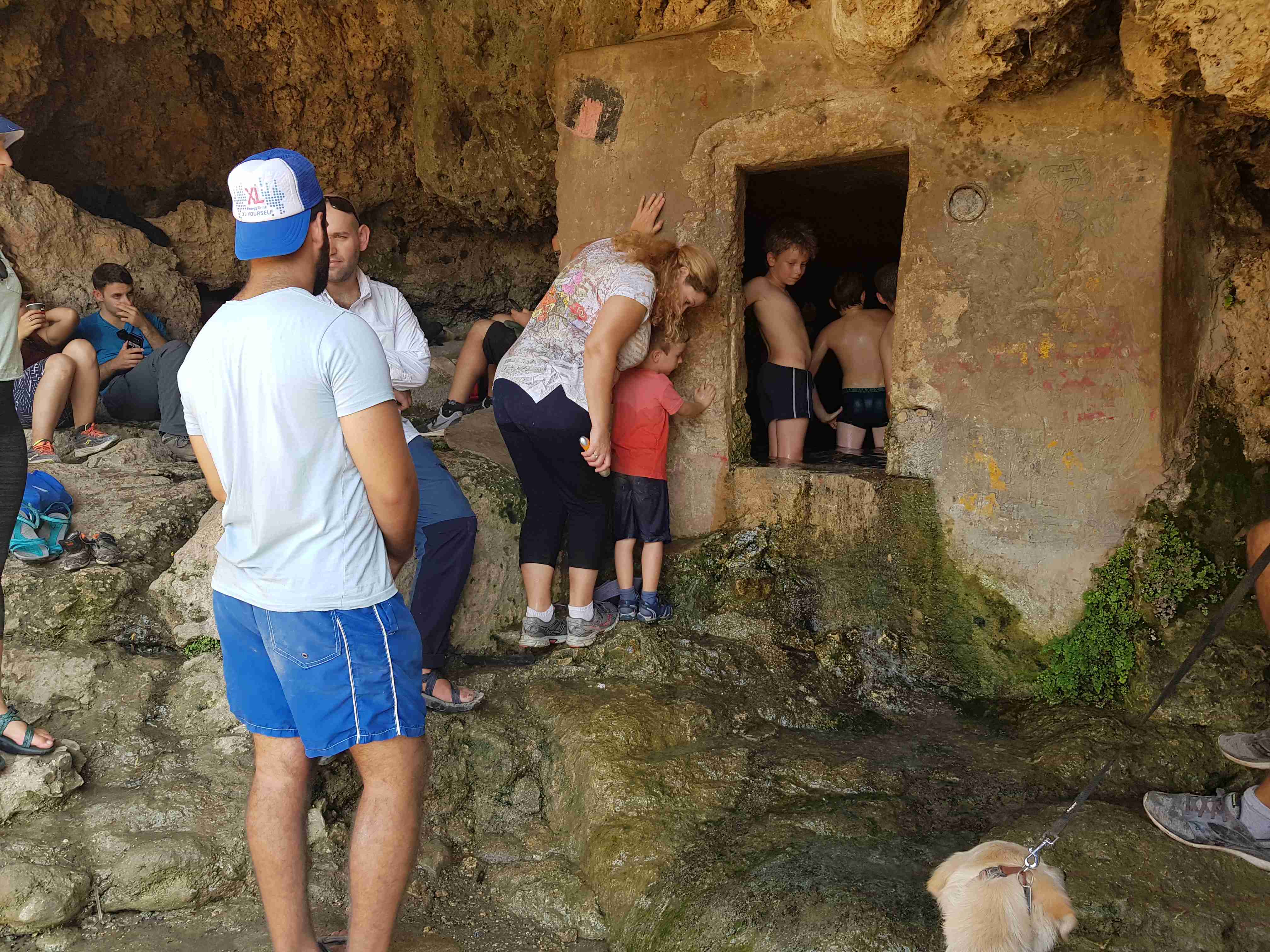 After cooling down, we returned on the same black-marked trail to the crossroad (5). From there, we continued on the blue-marked trail right (west) towards the ending point. The trail goes on for about 1 kilometers, until it arrives at a small farm, where it ends (7). We said hello to some orange cows which were roaming around and then walked into Tirat Carmel, the city which is situated at the end of the trail (or the beginning of the trail, if you choose to climb up the mountain). The road is called Ha-Kahruv Street (in Hebrew: החרוב), and if you don’t have anyone who can pick you up from this point, you can walk a bit more to one of the bus stations in the neighborhood and take a bus back to Haifa. I advise you to check your possible bus routes before going on the trail, using Google Maps or any other system. One of the nearest stations to the end of the trail is called “Lev Ha’Ir Mall/Herzl”. 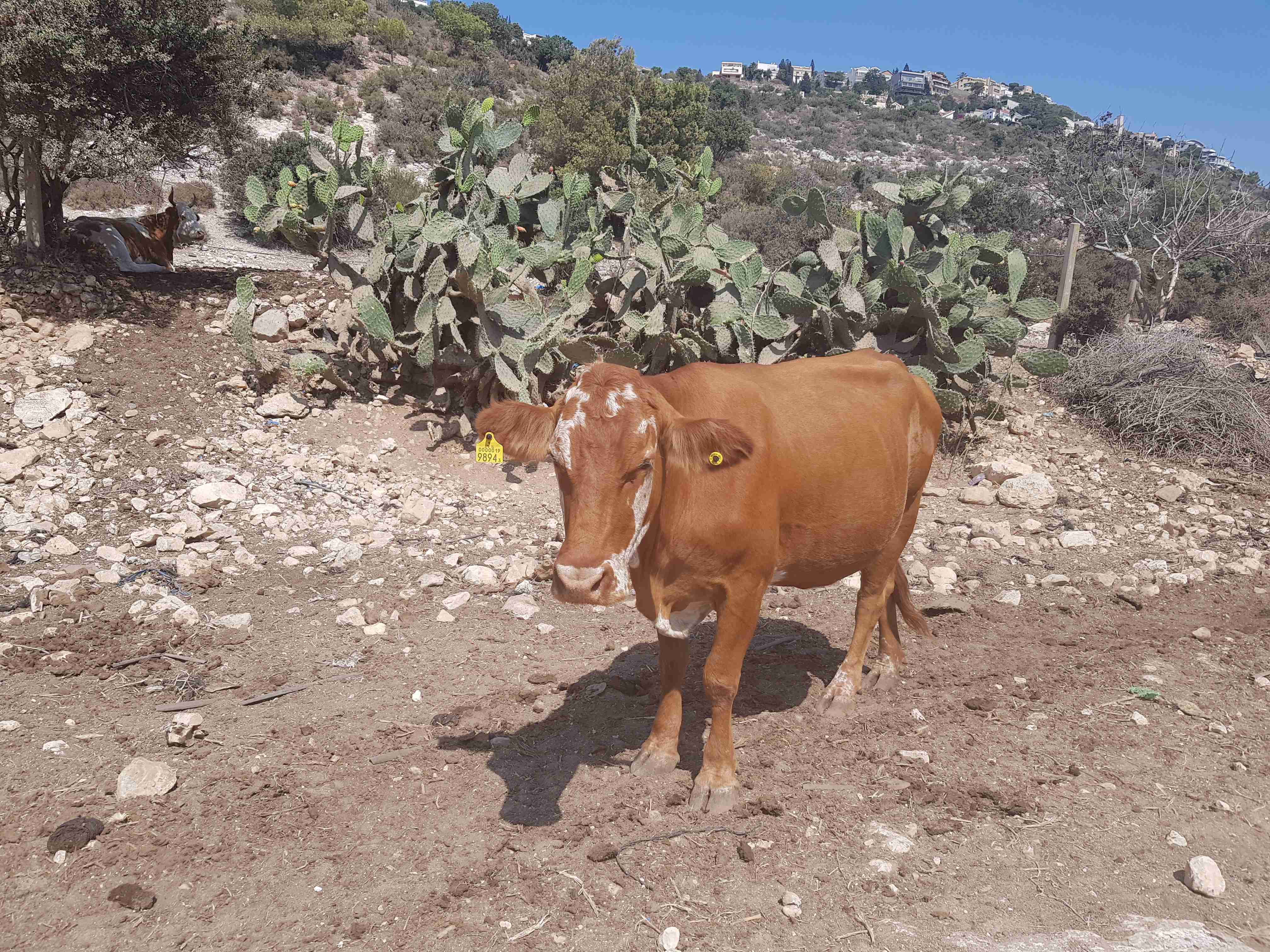 If you’re into forest landscapes and a bit challenging descends, this trail will be perfect for you!

How much time does the trail take? About 3-5 hours, depending on your fitness and how many people are on the trail (because there could be lines at the climbing points).

Difficulty: It’s a trail for good hikers. It could be a bit challenging because of the descends.

It is about 6.5-kilometers long.

Other trails in Israel:

Wishing you a beautiful hike in the Carmel!

Half a Day Around Beit She’arim National Park

The Best Restaurants in Haifa: Wadi Nisnas and...

[…] Hiking Down the Carmel Through Wadi Kelah and Galim […]