Home » Highlights of the Israel Museum in Jerusalem
Jerusalem 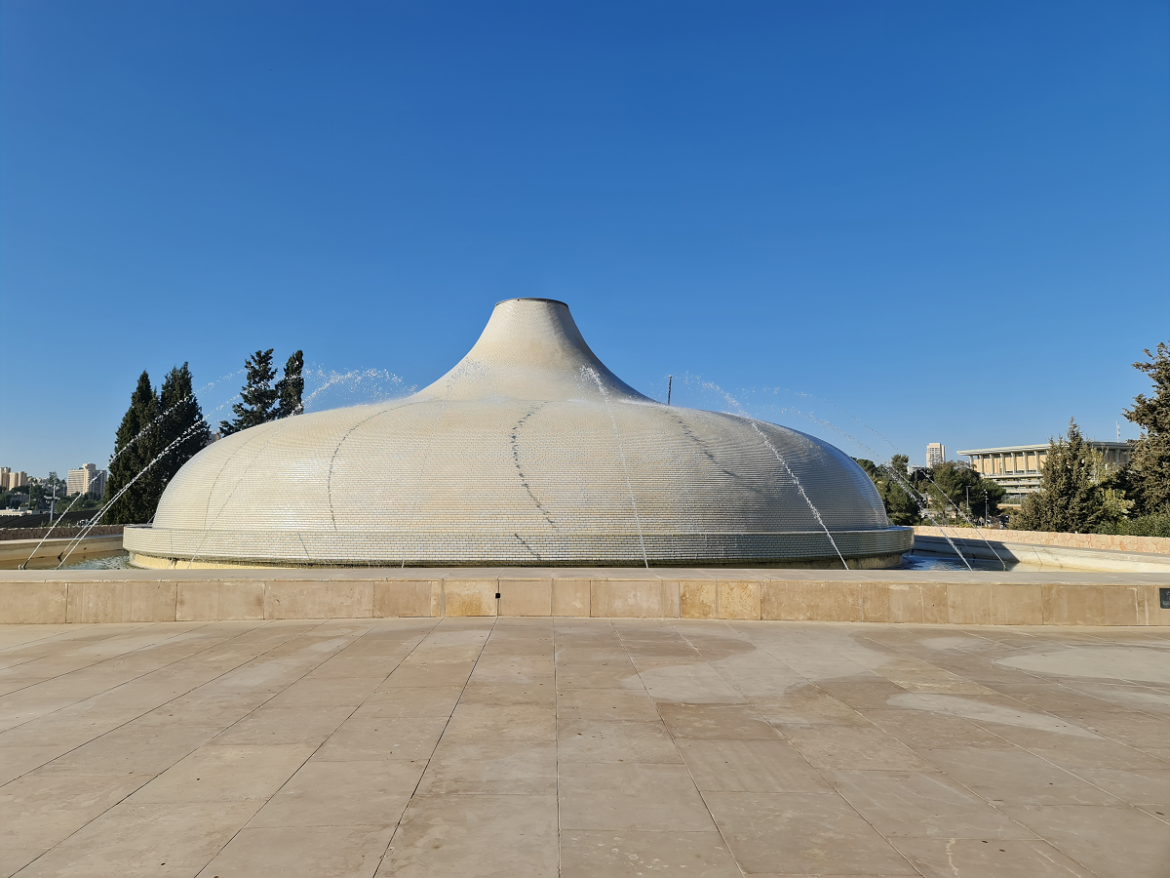 I usually don’t write about places that require admission fees, but the Israel Museum in Jerusalem is worth the money. It’s the largest and most important cultural institution in Israel and is considered one of the leading art and archeology museums worldwide. It holds the most extensive collection of archeological findings connected to the Holy Land and also has extended collections of Jewish art and fine arts.

I’ve visited the museum many times throughout my life. Every time I visit, I find something new because there’s SO MUCH to see. So, if you want to learn more about the archeology and Biblical history of Israel without traveling all around the country – I highly recommend the Israel Museum in Jerusalem. And I’d save at least half of your day for it.

In this post, I’ll tell you the highlights of the Israel Museum, so you can focus on the most impressive and important stuff.

When is the Israel Museum open?

If you’re looking for things to do on Shabbat (Saturday), the Israel Museum is open. For more ideas, read >> Shabbat in Jerusalem: What’s Open?

How much does it cost?

It costs 54 shekels for adults and 27 shekels for kids ages 5 to 17. On Tuesdays and Thursdays, kids can enter the museum free of charge. An audio guide is included in the ticket price.

If you visit the museum again within 3 months, the ticket price is only 27 shekels for adults.

You can purchase the tickets in advance on the Israel Museum’s website, but it usually doesn’t take much time to purchase tickets at the museum. If you’re traveling with kids, you will have to pay for them at the museum anyway.

How to get there?

The Israel Museum is located in Jerusalem, right next to the Knesset, the Israeli parliament. To get there, you can take bus number 7 or 9 from the city center or bus number 66 from outside the Central Station. Get off at the “Israel Museum/ Wise” station. Both options take about 20 minutes, depending on traffic. Use Moovit or Google Maps to get around.

Alternatively, you can walk to the Israel Museum from the city center. It will take you about 30 minutes. On Saturday, it’s ideal.

As I’ve mentioned, there’s a free audio guide included in your ticket. But if you prefer a human guide, you can check out the free guided public tours led by museum guides.

The Model of Jerusalem in the Second Temple Period

Personally, I think the highlight of the Israel Museum is this model. This enormous model, measuring about 1,000 square meters, shows how Jerusalem might have looked in the time of the Second Temple, around 66 CE. The model was designed according to the research of Professor Avi-Yonah, one of the greatest Israeli archeologists and historians. So, it wasn’t built from someone’s imagination. It might be very close to reality.

The most dominant part of the model is the Second Jewish Temple sitting on Temple Mount. It was built by King Herod in the 1st century CE, on top of a much more modest temple. According to historians from the time, it was a magnificent building. The Jewish sages from the time of the temple claimed that “whoever has not seen Herod’s building, has never seen a beautiful building in their life.”

Apart from Temple Mount, you can also see the Siloam Pool, the Palace of Herod, the Three Herodian Towers, and many more structures.

How to reach the model?

The Shrine of the Book

The next highlight is the Shrine of the Book, situated right next to the model of Jerusalem, underneath the white dome that you passed on the way. Inside the shrine, you’ll find the Dead Sea Scrolls, the most ancient copies of the Biblical books, that were discovered in Qumran in 1947. In the center of the shrine, there’s a replica of the Great Isaiah Scroll, the largest and most well-preserved scroll, that includes all the chapters of the Book of Isaiah. The original scroll is kept somewhere safe, where it won’t get damaged.

On the bottom floor of the shrine, there’s the Aleppo Codex, the oldest existing Hebrew Bible, dating from the 10th century. It was originally written in Tiberias but then was kept in the Central Synagogue of Aleppo until the synagogue was burned down. Somehow, most of it survived and arrived in Israel.

When entering the Shrine of the Book, you’ll also pass by some interesting displays about the Essenes, known as the Judean Desert sectarians. It is believed that some scrolls that were found in Qumran were written by this Jewish sect. And if you’ve wondered about the white dome and the black wall above the shrine, they are also connected to the Essenes. They referred to themselves as the “Sons of Light” and referred to their enemies as the “Sons of Darkness.” So, the white dome is supposed to represent the Essenes, and the black wall – their enemies. The white dome also represents the pot in which some of the scrolls were found.

How to reach the shrine?

Climb back to the porch and then go down the stairways behind the black wall, that stands opposite the white dome. The entrance to the shrine is at the bottom of the stairs.

Highlights of the archeological wing

The Israel Museum has a beautiful and extensive archeological wing, that showcases artifacts from prehistoric times to the Ottoman time in the Land of Israel. Here are some of the highlights for which you should keep your eyes out:

When you enter the archeological wing, you’ll see this small piece of stone spinning around in a glass showcase. Microscopic findings suggest that it was modified by humans more than 230,000 years ago, making it the first artwork in human history. If you look closely, it seems that the stone resembles a female figure, hence the name – Venus.

Deeper into the archeological wing, in the Chalcolithic exhibition, there’s a collection of around 400 copper artifacts. These artifacts include scepters, different types of containers, and artifacts that look like crowns. They display a high level of technique and are richly decorated. Discovered in 1961 in the Judean Desert, some believe this treasure belonged to the sanctuary in Ein Gedi.

In the “Israel and the Bible” exhibition, there’s a victory stele that mentions the “House of David”. This is an exciting finding because it is the earliest reference to King David’s dynasty outside the Bible. It was found in Tel Dan in the north and is from the 9th century BCE.

Next to the Holy of Holies from the sanctuary at Arad, there’s a small glass showcase showcasing the “House of God” letter, written on a piece of clay. In this letter, that was sent from Jerusalem to Arad, there’s the most ancient reference to the First Temple built by King Solomon.

Next to a replica of an ancient burial cave, you’ll find two silver amulets that bear the most ancient copies of the Priestly Benediction. They are 500 years older than the Dead Sea scrolls, which means their biblical text is the oldest found today. Unfortunately, because the text was written in tiny letters, you won’t be able to read it.

The ossuary of Jesus son of Joseph

Near the end of the archeological wing, there are several ossuaries that were discovered in Jerusalem and bear names familiar to us from the Christian New Testament. For example, one of the ossuaries, dating to the 1st century, belongs to Jesus (Yeshu) son of Joseph (Yoseph). It’s probably not Jesus from the New Testament, but it does show us that these names were common.

Ossuaries became very common in the Jewish world in the 1st century CE. The Jews buried their dead in a burial cave and after a year, when the body became a skeleton, they came back to the cave, gathered the bones, and put them in an ossuary. Then, they could place another body in the cave. Very efficient.

Next to the ossuaries, you’ll also see a replica of a heel bone pierced by an iron nail. This heel bone was found in Givat Hamivtar in Jerusalem and is evidence that the Romans used to crucify people.

The Jewish Art and Life Exhibition

No matter if you’re Jewish or not, the Jewish Art and Life Exhibition in the Israel Museum is a fascinating wing to visit. From walking through the exhibition, you can learn about the different Jewish ceremonies, the Jewish holidays, and the traditional costumes and jewelry of different Jewish communities.

The highlight of this exhibition is the Synagogue Route, which includes four synagogues from four countries – Italy, Germany, South America, and India. The synagogues are copies of their originals, and the furniture items – including the platforms, the Torah arks, and the seating – are all original.

What about the art exhibition?

In my opinion, a visit to the art exhibition requires a separate day.

Tips for visiting the Israel Museum

The Israel Museum in Jerusalem is one of the most impressive museums in Israel, with the most extensive Biblical archeology collections in the world. You will need at least half a day to see the museum’s highlights because there’s SO MUCH to see. Start from the Model of Jerusalem, continue to the Shrine of the Book, and explore the Archeological Wing. If you have time, visit the Jewish Art and Life Exhibition. Everything is very fascinating!

Need a private guide in the museum? Contact me at lior@backpackisrael.com for a price offer.

Is Israel Hot? Yes! Here Are 5 Ways to Survive It