Golan Trail Day #7: From Amphi Golan to the Sea of Galilee 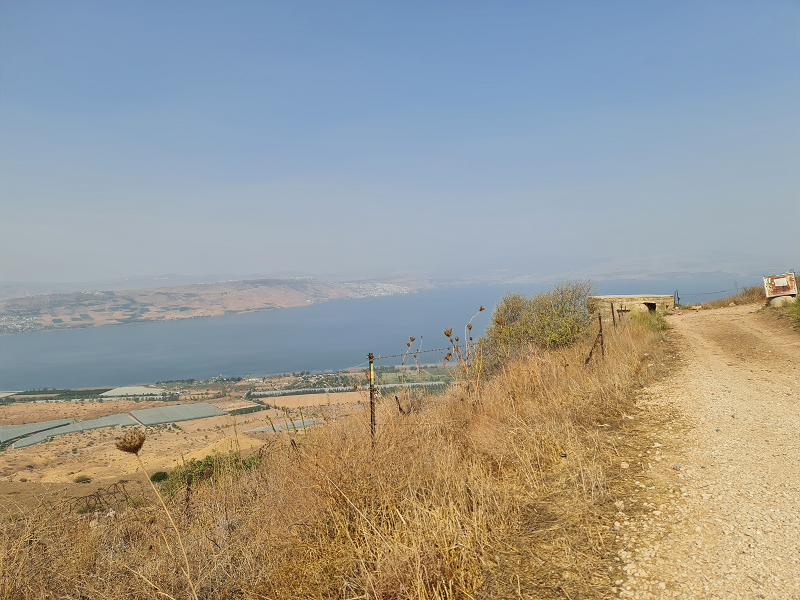 The last day on the Golan Trail was beautiful. It started with a tough climb down and up Wadi Meitzar but ended with a relatively easy route along the edge of the Golan. We started early because we wanted to get to the Sea of Galilee in the afternoon. It’s not officially on the Golan Trail, but it’s possible to get there from the trail. Check out the previous day – From Givat Yoav to Amphi Golan.

The segment from Amphi Golan to the Sea of Galilee starts with climbing down to Wadi Meitzar. After a while, it leaves the wadi and climbs up to the edge of the Golan Heights. Then, there are endless views of the Sea of Galilee. We reached the end of the trail and then went down a route that led us to HaOn, a settlement on the shores of the lake.

Trail duration: About 8 hours, depending on your pace.

Stay options at the end of the trail: We didn’t stay overnight at the end of the trail. But if you want to stay near the Sea of Galilee, you can stay at the Daria Vacation Village in HaOn. If you prefer a more budget-friendly option, you can take a bus from HaOn to Gofra Beach, which is about a 20 minutes ride. While Gofra Beach isn’t free-of-charge, it’s still cheaper than Daria, and you can camp there with facilities.

If you need further help with planning your hike, you are welcome to contact me at lior@backpackisrael.com.

The hike starts from Amphi Golan. To get there, you will need to take a bus to Afik Intersection and then walk about 2.8 km to Amphi Golan. If you’re coming from Jerusalem, you can take bus number 966, which stops at the “Afik North Intersection.” From Tel Aviv, you will have to take two buses to get there.

In any case, check Moovit or Google Maps for the best route, depending on your departure point.

If you have a car, you can drive it up to the Amphi Golan Campground or Afik. At the end of the day, you can take bus number 51 from HaOn Intersection back to Afik, which would be about a 40-minutes ride.

We woke up early at the Amphi Golan Campground (1) and started the hike in pitch darkness. In retrospect, it was better to start when there was more light because we passed by some interesting sites that we couldn’t really see in the darkness.

First, we saw something that looked like a cave, which we later understood was “the Menorah Cave.” It’s one of over 20 Byzantine-period burial caves that were most likely part of the cemetery of the nearby ancient village of Pik. The Menorah Cave is supposed to have a menorah decoration engraved on its façade. We didn’t see it because we didn’t pay too much attention, but you can take a look.

A few steps later, we passed by a sign about Amphi Golan. It said that it’s a modern theatre built here for the residents of the Golan on top of an old rock quarry. We looked around but couldn’t see it because of the dark.

About 480 km from the campground, we crossed road number 98 (2) and reached the entrance to Nahal Meitzar Nature Reserve. From there, we got a bit confused with the trail because we didn’t understand the trail mark and couldn’t see the next one. But after a while, we tracked the trail, which started its way down the wadi.

The descent was a bit steep, but there were stairs here and there. After about 1.2 km, we reached the bottom of the wadi (3). There, we rested beneath a large tree for a while. Then, we crossed the dry channel of the Barbara Stream, turned left, and continued alongside the channel. There were some really nice rock formations on the way and lovely vegetation.

The trail continues downhill through the wadi for quite a long time. After about 1.4 km, we reached the Big Oak Tree (4). It’s a very tall oak tree that looks very ancient.

Then, we continued about 550 meters to a trail junction (5) near an asphalt road. At the junction, we turned right onto the red-marked trail, which overlapped the road. We started a long and gradual climb out of the wadi on the road. After about 2.2 km, we reached the top of the road, where there was a pretty viewpoint called “Sela Daniel” (6). The outlook was built in memory of Daniel Yafe, a member of kibbutz Ramat Yochanan. There was a nice picnic table, so we stopped for a late breakfast before moving on.

From Mevo Hama to the end of the Golan Trail

We passed by a fenced area with cows and horses. After about 1.7 km, we started walking next to the agricultural fields of Mevo Hama. This Israeli settlement was the second to be built in the Golan after the 1967 Six-Day War. To the right, there were all kinds of fruit trees. And to the left, we saw cotton fields. Most of the cotton was already packed up in huge circular yellow containers at the side of the field.

After about 1.3 km, we reached the access road to Mevo Hama (7) and turned left on the Golan Trail. The trail went alongside the road for a while, then crossed it and led us to Mevo Hama’s cemetery. We stopped in front of the view of the Sea of Galilee. There’s a beautiful view of the lake from over there!

After resting a while, we continued on the trail alongside the edge of the Golan Heights. The view of the Sea of Galilee escorted us all the way. There were also some old Syrian bunkers and guard posts here and there. After about 2 km, we reached an asphalt road that led us downhill.

We continued downhill for about 2.3 km until we reached a trail junction (8). The Golan Trail turned left and continued upwards, and the green-marked trail turned right and went downwards. We wanted to go on the green-marked path because it leads to the Sea of Galilee, but we also wanted to see the end of the Golan Trail. So, we went up the Golan Trail for about 400 meters until we reached Ein Aqov or Taufiq Spring (9). It seemed like the trail’s end because there was a large sign there talking about the Golan Trail in general. We took some pictures, looked at the spring, which didn’t look inviting, and went back down to the trail junction.

Extra: The Sea of Galilee

The way down on the green-marked trail starts nice. We passed by some ruined concrete buildings, which once belonged to the Syrians, and some minefields. After a while, the route became bumpy, with lots of white stones all over the path, making it hard to walk. But after about 3 km, we reached the left-hand turn to a red-marked trail (10) that led us toward HaOn and the Sea of Galilee.

We passed by some plantations and reached the HaOn Cemetery (11) after about 880 meters. There were some water faucets there, so we filled up our bottles and washed our faces before heading to the road separating us from the Sea of Galilee. We crossed it and then continued on the access road that led to the gates of the Daria Vacation Village (12). We waved toward the closed gate, and someone remotely opened it for us. Maybe he saw that we were carrying huge backpacks and understood we were hikers that just wanted a short dip in the lake.

A short walk from the gate, we reached the Sea of Galilee. The beach was completely empty, so we had it all for ourselves. It was a beautiful way to finish the Golan Trail.

Afterward, we returned to the road and took a bus to Zemach Junction, where we had a car waiting for us. If you don’t have a car waiting for you, you can catch bus number 57 to Tiberias and continue from there to wherever you need.

The last day on the Golan Trail was beautiful, with many views toward the Sea of Galilee. If you’re going to hike it, make sure to start in daylight. I feel I’ve missed out on some sights at the beginning of the day because we began in pitch darkness.

The Golan Trail: A Full Guide for Hikers