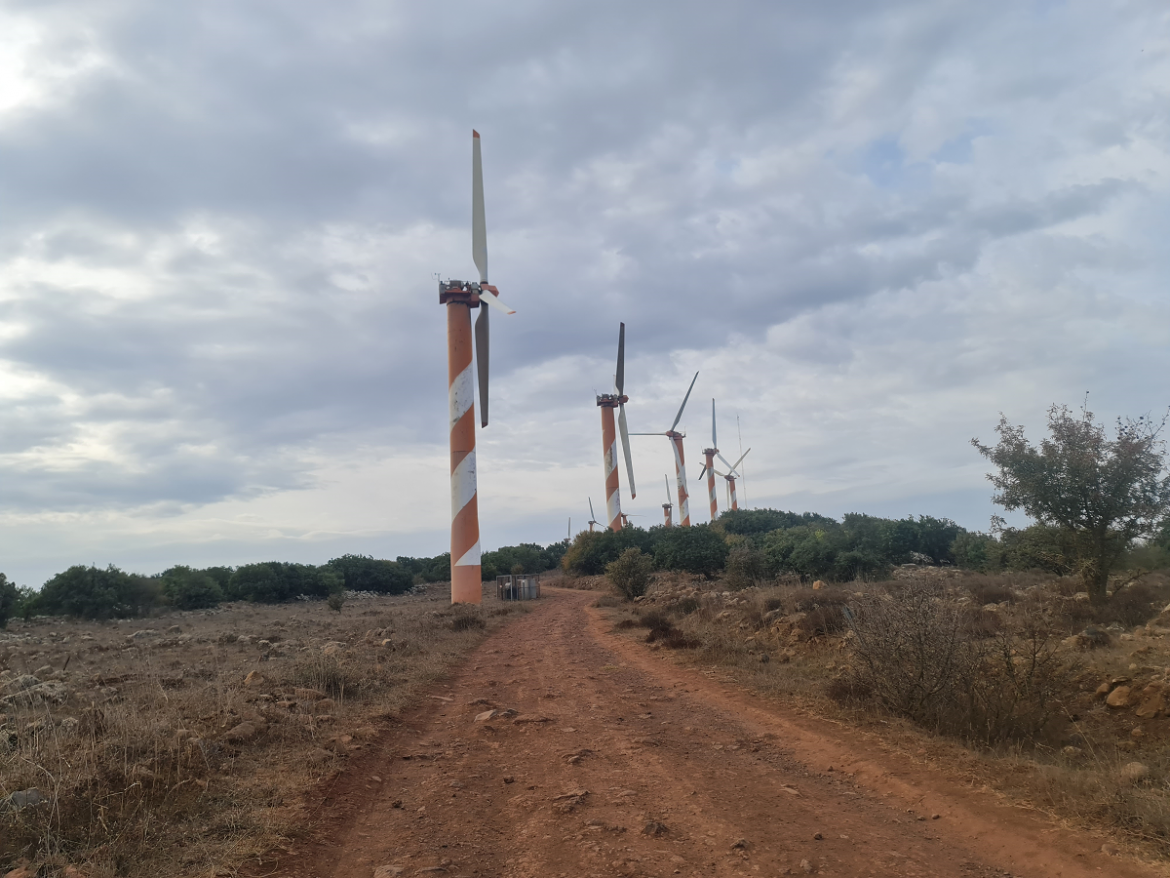 Our night at the Ein Zivan campground was quite pleasant, except for some teenagers who came in the middle of the night and started playing music. We left the campground quite late, but still in the morning, and headed to our next destination – Hurvat Khishniyah. Check out the previous day – from Palsar 7 Memorial to Ein Zivan.

The segment from Ein Zivan to Hurvat Khishniyah was easy but could have been more interesting. We climbed some hills, saw lovely views of the Golan, and met some cute creatures on the way. But for me, the best part of this day was Hurvat Khishniyah, with its abandoned mosque.

Trail duration: 8 to 10 hours, depending on your pace.

Water along the way: There is water at the starting point, Ein Zivan campground. Also, there might be a water cache about 11 km from the start of the trail, near Alonei HaBashan, but don’t count on it. When we hiked on the trail, the water cache was empty. There is a camping area for Golan Trail hikers in Alonei HaBashan, where you can also fill water. So, we made a 1 km detour to Alonei HaBashan to fill our water bottles. Other than that, there’s no drinking water, also at the endpoint.

Stay options at the end of the trail: We stayed at Hurvat Khishniyah because we read somewhere that it’s a campground. In reality, we didn’t see any sign indicating it was a campground. It was pretty spooky sleeping there because of all the abandoned buildings, but we managed to have a good night. If you prefer to stay indoors and in a less creepy place, you can walk farther to Keshet. It’s about 3 km away on the side of the road or about 4 km on nature trails. You can find several accommodation options in Keshet on Booking.com. Another option is to try to find a trail angel in Keshet.

If you want to start your hike from Ein Zivan, you can get on bus number 59 from Kiryat Shemona and get off at Ein Zivan. The bus will drop you inside the kibbutz, so you’ll need to walk a bit to the campground and the starting point of the trail, located on the other side of the road. But I recommend checking Moovit or Google Maps for the best route, depending on your departure point.

From Ein Zivan to the top of Mount Bnei Rasan

We left Ein Zivan campground (1) and started making our way to the east. The trail is plain and easy here. We passed by an old tank that stood next to the path and some minefields. After about 3 km, we reached road number 98 (2). We crossed the road and turned right with the trail. A short while later, we turned left, passed a cattle grid, and continued about 460 meters to a right-hand turn (3). A bit after the turn, there’s a large water-filled hole. We didn’t get if it was a water reservoir or a water spring. Either way, the water didn’t look welcoming, and there was a fence around it.

From the turn, we continued on an easy and gradual climb to the top of Mount Bnei Rasan. Like many other hills in the eastern part of the Golan, Mount Bnei Rasen is a dormant volcano. While climbing up, we passed by a row of wind turbines that belong to the Bnei Rasan Wind Farm. It was established in 1993 and supplies electricity to the nearby villages.

We reached the top of the mountain after about 1.2 km (4) and stopped to rest in front of the view.

Then, we started the descent. It was very easy. After the descent, the trail continues on an easy and relatively flat route. About 3.2 km from the top of Mount Bnei Rasan, we reached the small asphalt road that led left to Mount Hozek (5). We stopped a bit before the road for breakfast, but it was a bad place to stop because it was full of wasps, and there wasn’t much shade.

After breakfast, we turned left towards Mount Hozek, another dormant volcano. The trail doesn’t climb to the top of the mountain because it’s a military training zone and covered minefields, but it does climb a bit of the hill. We went on the asphalt road for about 1.2 km until we reached the right-hand turn off the road to a sign indicating the end of the seventh segment of the trail (6). Because we didn’t follow the official division of the trail, we didn’t stop there.

from that point, the Golan Trail continues through the forest of the Bashanit Ridge Nature Reserve. Ayelet got really excited because a short while after we got off the road, we saw the second flower she was looking for – the yellow Sternbergia clusiana. Like the Colchicum flower we saw on the previous day, Sternbergia clusiana also blossoms only in fall and winter. So, you can’t see it when hiking the trail in spring.

We passed by the batches of yellow flowers, which hid behind some rocks, and started ascending from the mountain. Here and there, the view opened up and we could see the lovely view of the Golan and of Alonei HaBashan. After about 1.2 km, we reached the bottom of the descent and a trail junction (7). The right turn led to Alonei HaBashan and the left turn to the Golan Trail. There was also a green-marked trail that went straight.

According to the map, there was supposed to be water at this junction, but we didn’t see any water tap. After a while, we saw a covered pit next to the fence. We opened it and found some empty water bottles. So, it looks like it’s a water cache, but it didn’t work well when we were there. We had to fill water for the night and the following day, so we changed our plans a bit and took the detour to Alonei HaBashan.

The trail to Alonei HaBashan is about 1-km long and downhill. Alonei HaBashan is a religious cooperative village, so please keep in mind that it might be problematic to enter on Shabbat. We entered from the back gate, turned left, and after a while reached the center of the village, where their grocery store is located. We didn’t have the energy to walk to the camping area, so we asked a kindergarten if we could fill water there. Then, we bought some things in the grocery store, rested for a while, and returned to the trail. The way up from Alonei HaBashan to the trail junction wasn’t fun because it was already afternoon and hot.

From the junction, we continued on the Golan Trail. From this point, this trail is a bit boring. It goes on a plain dirt route for quite a long time. We saw some cows on the way, but other than cows, we didn’t see anything special. About 4.6 km from the trail junction, we saw the Or VeYerushalaim Monument to the right of the trail (8). But it also didn’t look very impressive. It was built in memory of Yosef Sarig, a poet who wrote the song “Or VeYerushalaim” (“Light and Jerusalem”). He fell in the Golan Heights in one of the 1973 Yom Kippur War battles.

We continued a bit and stopped underneath a fig tree. Ayelet and Sapir were starved, so they picked LOTS of figs and ate them.

About 2 km from the memorial, we reached road number 98 (9) and crossed it carefully. Now, we could already see the woods surrounding Hurvat Khishniyah in the distance. About 660 meters from the road, we crossed some water, which watered the plants around it and made them look all green and beautiful. There was also a salvia bush there, so we picked some salvia for tea.

A few steps after the water crossing, we suddenly noticed a cute green frog on the trail. When it realized we were there, it jumped to a crazy height and vanished into the bushes.

About 1 km from the water crossing, we entered the abandoned village of Khishniyah (10), where we planned to stay the night.

Khishniyah was the largest Circassian village in the Golan until it was abandoned during the 1967 Six-Day War. The Turks brought the Circassians here at the end of the 19th century to try to block the Bedouins from coming near the border area. But people have lived here even before the Circassians, most likely because of the settlement’s strategic location on an ancient road that linked Damascus to the Mediterranean Sea.

Because we didn’t find a designated campsite and it started to get dark, we decided to stay the night inside the village’s abandoned mosque, the most impressive building left. It was a bit damaged during the war, but still stands and looks quite intact. We even took the stairs up to its minaret. It was a bit stressful climbing up because there’s no railing and if you stumble, you might fall off. So, I only took a quick look from the top and hurried back down.

I’ll tell you the truth, staying there was VERY spooky. Also, I don’t know how safe it is to sleep in the building because it is partly damaged, and I don’t know if it’s being preserved. But the building protected us from the wind, and we passed the night without special events.

If you want to end at this point, you will need to walk to the village of Keshet and take a bus from there. The way to Keshet is either on the side of the or on a nature trail. Either way, it’s better not to walk there when it’s dark, so try finishing the trail before sundown.

The Golan Trail from Ein Zivan to Hurvat Khishniyah is pleasant and quite easy. But the trail’s highlight was its end – the abandoned village of Khishniyah, which has a very impressive mosque. The problem with this segment is that you don’t have water at the end of the segment, so you need to make sure you have enough for two and a half days on the trail. Another option is to make a detour to Alonei HaBashan and fill water there.

Save it for later!