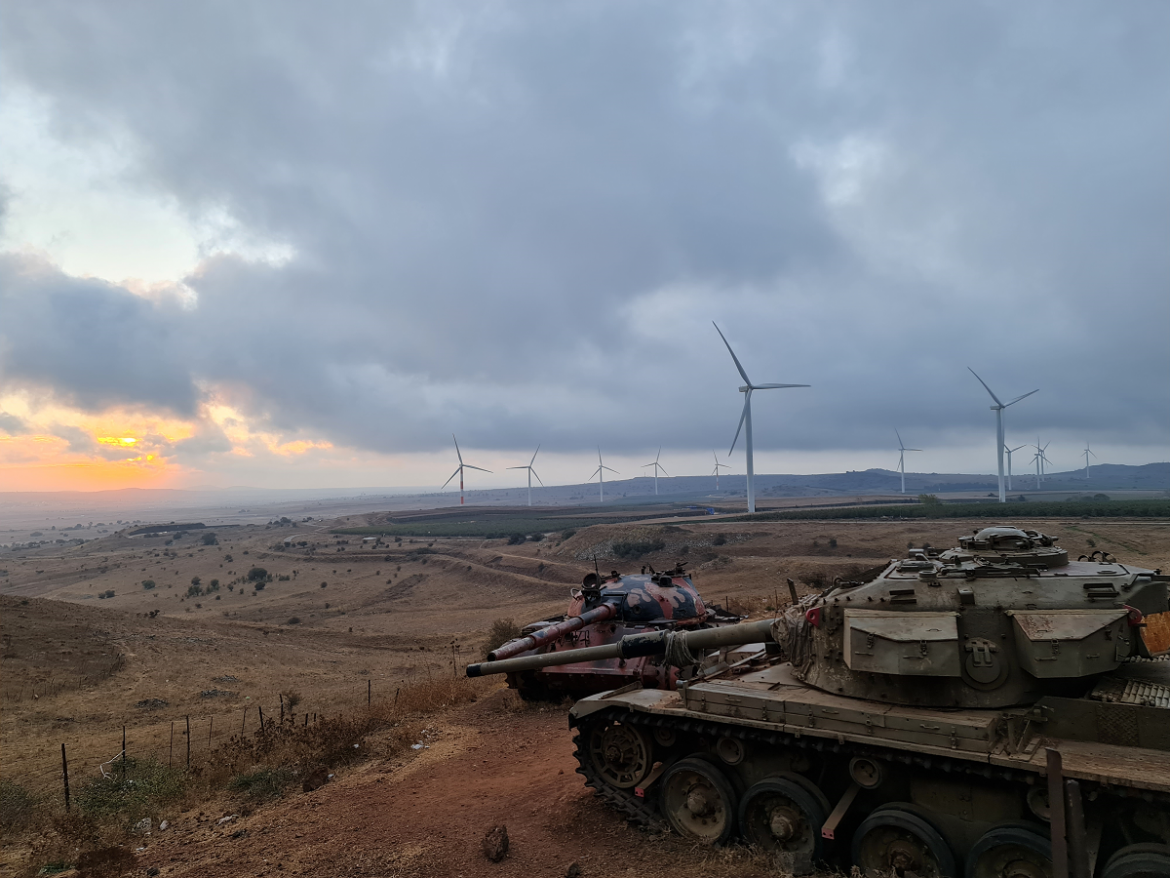 After our first day of hiking on the Golan Trail, we woke up early and started our second day on the trail. On this day, we planned to walk all the way to Ein Zivan, one of the most popular kibbutzim in the Golan.

The segment from the Palsar 7 Memorial to Ein Zivan is beautiful and fascinating. It passes through historical battle sites and next to huge wind turbines. It also offers some stunning views of the Golan from the top of well-known mountains.

Trail duration: 8 to 10 hours, depending on your pace.

Stay options at the end of the trail: We stayed at the Ein Zivan Campground, located right next to Ein Zivan. The campground is very comfortable and includes drinking water. If you prefer sleeping indoors, you can try the Ein Zivan Village Resort. I haven’t stayed there, but it looks like a good-looking place from the outside.

If you would like to start your hike from Palsar 7 Memorial, you can take a bus to El-Rom or to Buq’ata. Both are about 1 km from the Palsar 7 Memorial. One of the options is to get to Kiryat Shemona and from there, take bus number 58 that passes both through Buq’ata and El-Rom. The ride from Kiryat Shemona to your destination takes about 50 minutes. But I recommend checking on Moovit or Google Maps for the best route depending on your departure point.

From the campground to the Oz 77 Memorial

We woke up early, before sunrise, and started walking from Palsar 7 Memorial (1) to Mount Hermonit. We carefully crossed the road and then went on a dirt road for about 1.4 km until we started the climb up the mountain (2).

Mount Hermonit, like many other mountains in the Golan, is a dormant volcano. In the Druze tradition, Mount Hermonit is the wife of Mount Hermon, hence its name. It rises to a height of 1,211 meters, which makes it the second-highest mountain in the Golan. But don’t worry – the Golan Trail doesn’t lead to the top of the mountain. It just goes around its edge.

So, we circled the mountain’s edge. It was still dark, but we could see the light starting to rise from the east. After about 1.3 km, we reached a steep descent (3) that led us down to the Valley of Tears. It’s a very short descent. At the bottom, we turned right and started walking on an asphalt road. After a while, we started spotting the wind turbines in the distance. The Golan Heights, and specifically the area of the Valley of Tears, is an ideal place for turning wind power into electricity. It’s SUPER windy. Today, there are over 30 turbines in this area.

While walking on the road, we also came across a Jeep with two farmers. They were very surprised to meet us. “I’ve never seen someone hike here so early,” one of them told us. We replied that we’re used to waking up before the sun rises. It’s the best time of the day.

About 900 meters from the turn, we reached the Oz 77 Memorial in the Valley of Tears (4). It is one of the most impressive memorials in Israel. We arrived just before sunrise, so the sun’s rays poured down on the old tanks that stand here. It was a stunning view. If you can make it here for sunrise, it’s really recommended!

The Valley of Tears was the site of one of the most heroic and well-known battles of the Yom Kippur 1973 War. In the battle, the Israeli tanks were outnumbered by the Syrian tanks, but still, they were able to hold back the Syrian forces and make them retreat from this area. The memorial was built in honor of the soldiers who were part of battalion number 77, the battalion that fought here.

From the Oz 77 Memorial to the bottom of Mount Bental

We rested a bit at the memorial in front of the stunning view and then continued on our way. The trail took us down the valley and to a gravel road, that passed by the wind turbines. About 1.2 km from the Oz 77 Memorial, we reached a building that looked quite abandoned (5). The map said that there was supposed to be drinking water there, but in reality, there was no drinking water. It also said: “Private Property.”

From the building, we turned right and continued on an asphalt road for a bit. To the left, we saw a vineyard that belongs to the Golan Heights Winery. The Golan is a perfect place for vineyards because the basalt ground is filled with minerals and the temperate is ideal for the grapes.

We walked on the road for about 400 meters and then turned left (6) to a dirt road. About 600 meters later, we reached our first official minefield. The trail passes right through it. There are fences on both sides of the trail, with signs warning “DANGER MINES!” so don’t cross the fences. Those minefields are a memory from the Syrians, who once ruled the Golan Heights. Since the Golan was the piece of land that separated us from them, they put many mines all around the Golan. After the Six-Day 1967 War, the Israelis also added some mines to the Golan. Only much later, we realized that it’s dangerous and people are exploding, so we started clearing away the mines. But it’s a long-time mission that is still undergoing.

We crossed the minefield and after 1.4 km reached road number 98 (7). We carefully crossed it, passed through two gates, and continued on the trail toward Mount Bental, which we could see in the distance. Mount Bental is another dormant volcano, which rises to a height of 1,165 meters.

On the way to the mountain, we passed by some Colchicum flowers. They were pink and really stood out between all the yellow thorns. Ayelet got really excited and started photographing them. She said: “People say we’re missing out on the blossoming of the flowers in springtime, but the Colchicum only blooms in the fall!”

About 1.5 km from the road, we reached a cute bench that overlooked the Bental Reservoir and Mount Bental (8). There was a box tied to the tree next to the bench and inside the box, there were some apples. “Dear traveler, have an apple from Ortal’s orchard,” they wrote on a piece of paper that was connected to the box. Kibbutz Ortal is beyond Mount Bental, so it seemed like they really made an effort. It was really nice.

We rested for a bit beneath the tree and then started our way to Mount Bental. We crossed the road again and then walked to the side of the water reservoir. On the other side of the road, we could see the smaller Baron Pool.

Up Mount Bental and Mount Avital

About 1.4 km from the road, we turned right (9) and started the climb up Mount Bental. The climb was a bit tough but wasn’t too long, only about 500 meters. So, it was ok. The view from the top is worth it. We saw the Bental Reservoir and to the left, the beautiful houses of Merom Golan, the first Israeli village built in the Golan Heights after the Six-Day War, a month after the end of the war.

The trail doesn’t go all the way up to the top of the mountain, but if you do want to go up to the top, there’s a red-marked trail that you can take up. You’ll be adding about 1.7 km back and forth. We didn’t do it because we had already seen the view from up there in the past. It’s a great view of Syria.

We continued on the edge of the mountain, on the Golan Trail. It circles the mountain and then goes down to an old tank, that has become a trail mark (10). From the tank, we turned left and continued for about 600 meters until we reached an abandoned tuff quarry (11), which is today a nesting site for several bird species, including the horned owl and the bee-eater. The tuff is ideal for those birds because they can easily dig nesting niches in it.

From the quarry, we passed a gate and started climbing up Mount Avital, yet another dormant volcano. We walked on the edge of the mountain and enjoyed the stunning view to the left. After about 2.9 km, we reached a left turn (12) and then walked a bit on a road until we reached another left turn, that took us down the mountain.

All the way to Ein Zivan

The trail goes down about 2.6 km to road number 91 (13). We crossed it and then walked through a small forest of oak trees about 850 meters to the Ein Zivan campground (14), our endpoint for the day.

The campground is well-maintained, with places to put a sleeping bag or a tent, chemical toilets, and drinking water. There are also designated places for bonfires. Right across the road, there’s Kibbutz Ein Zivan. It’s named after a Circassian village that existed here until the Six-Day War. Inside the kibbutz, there are several restaurants and the De Karina Chocolate Shop. We went into the kibbutz to get supplies from the grocery shop and to charge our phones there. Then, we made something to eat and went to sleep to get ready for the next day.

If you want to end at this point, you can easily catch a bus from Ein Zivan.

This is one of the best days on the Golan Trail. The view from the Oz 77 Memorial is stunning, the old tanks and minefields along the way really add to the ambiance, and the wind turbines are also fantastic. I really enjoyed my time!

Save it for later!