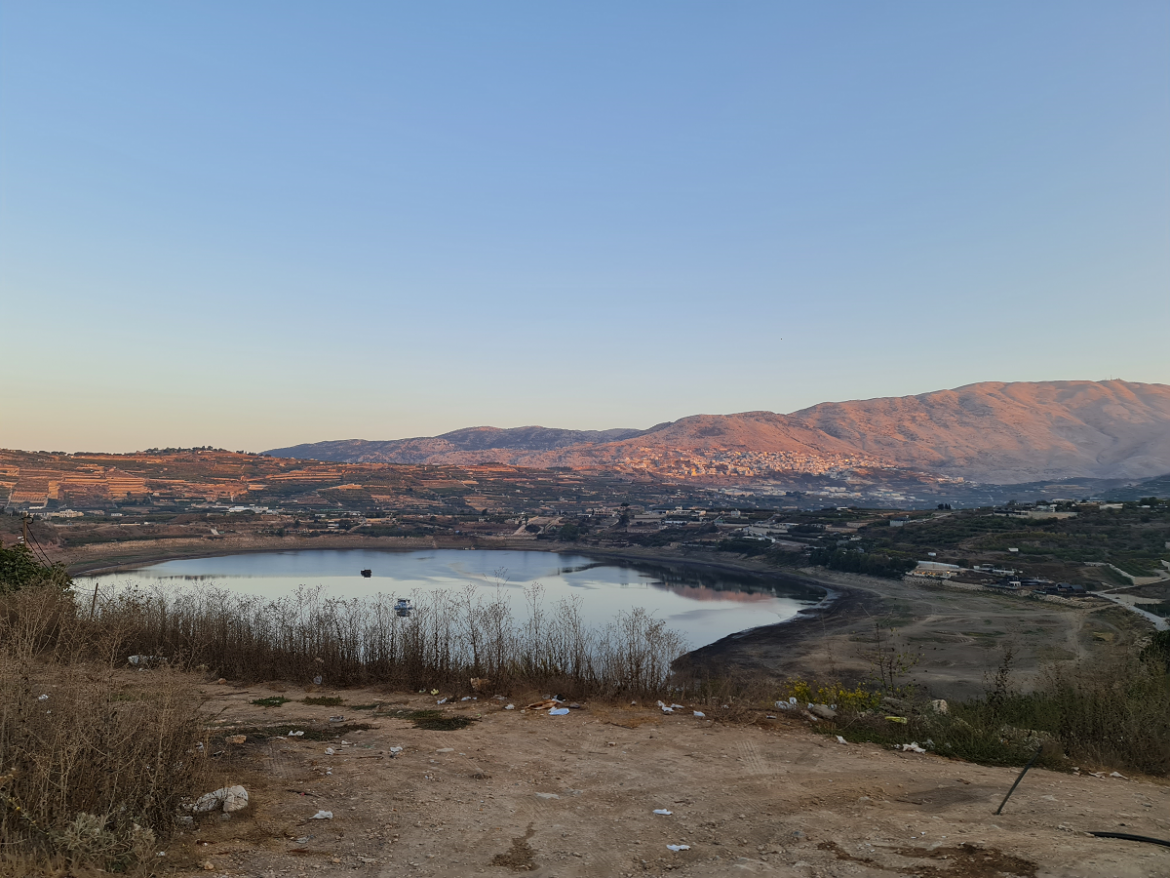 The Golan Trail is one of the most beautiful and fascinating trails in Israel. It combines stunning nature, ancient history, and modern-day history connected to the wars between Syria and Israel. I hiked the trail with friends in October 2022. It’s not the ideal season, but October does have its charm.

The segment from Birkat Ram to Palsar 7 Memorial is easy and enjoyable. It passes by thousands of dunams of orchards, which change their face according to the season. And it offers some fantastic views of the Golan, including the view of Birkat Ram (Lake Ram) and the view from Mount Odem. It’s good for getting used to the weight of the backpack.

Trail duration: 5 to 7 hours, depending on your pace.

Water along the way: There is no water along the way. If you’re staying in Birkat Ram, you can fill water at your accommodation before you leave. At the campground at the end of the trail, there is NO water. We filled water at a restaurant in nearby Buq’ata, but you can also do a detour to El Rom. Both are about one km from the campground.

Stay options at the end of the trail: We stayed at the Palsar 7 Campground. If you prefer sleeping indoors, you can do yurt camping in El-Rom or check for zimmer options in Buq’ata.

The official starting point of the Golan Trail is near the Mount Hermon cashier booths. There’s no official camping site near the start of the trail, so people usually stay in Majdal Shams and take a taxi from there to the beginning of the trail.

Since it requires extra logistics to get to the official start point, we preferred to start the trail from a more southern point – Birkat Ram. It takes about 11 km off the trail, but it’s much more accessible by public transportation and within walking distance from the Golan Trail.

No matter if you come to Birkat Ram or Majdal Shams, you should be prepared for a very long bus ride, especially if you’re coming from Jerusalem, Tel Aviv, or the south. We came from Jerusalem, took bus number 963 to Kiryat Shmona, and then took bus number 58 to Mes’ada Junction. From there, it was a 15 minutes walk to Bambook Park, the place where we stayed. Overall, it took us about five hours to arrive. We could have done it a bit faster if we had used two buses to Kiryat Shmona, but we preferred one bus.

You can use Moovit or Google Maps to find the best route for you depending on your departure point.

As I mentioned, we stayed at Bambook Park. Usually, Bambook Park is a lively place full of people, but we came on a cold day in October, completely off-season. So, the place was quite abandoned, and we had a hard time finding it. But it wasn’t too bad.

From the shore of Birkat Ram to the overlook above it

In the morning, we woke up early and started our hike around 6:30 AM. We climbed from Bambook Park (1) to the main road, turned right, and went for about 400 meters until we turned right again onto another paved road (2). It seemed like a popular road among the local community since it was full of early-morning joggers, walkers, and bikers. We continued on this road for about 1 km and then reached the right turn to the Golan Trail (3).

From this point, the Golan Trail continues on a paved road that climbs up between charming agricultural orchards. After about 320 meters, the trail turns slightly to the right and continues climbing upwards on the road. We climbed upwards and upwards for about 850 meters until we finally reached another right turn, which led us to a beautiful viewpoint over Birkat Ram (4).

Birkat Ram is a caldera, a hollow space that was formed following the emptying of a magma chamber in a volcanic eruption. Millions of years ago, this place was a high volcano called Mount Ram. In Hebrew, “Ram” means “High”. After the hollow space was created, it got filled up with underground water. So today, Birkat Ram is a lake. And it’s a beautiful lake.

Zigzagging through the orchards

We spent some time in front of the beautiful view of the lake and then started making our way down the road. We followed the trail, that zigzagged through orchards of apples and other fruit. Here and there, we could also see small water reservoirs, which we guessed were used to water the orchards.

After about 2.4 km, we reached road number 98 (5). We crossed it and then started walking in the woods, close to the road. After a short while, we reached a sign telling us about the “Mas’ade (Odem) Forest Nature Reserve”. The Odem Forest is the remnant of a much larger forest, which covered the entire upper part of the Golan until the beginning of the 20th century. The forest was badly damaged by the Circassians who lived in the Golan and used the trees for construction and commerce. When the Syrians came here, they ordered not to cut down any trees because they used the forest as a place to hide from the Israeli army.

We continued about 300 meters from the sign and reached Tel Katza (6). It’s marked on the map as if there’s something to see there, but it’s nothing special. Just a landmark.

From there, we turned right and walked through the forest. At first, we ascended, but soon enough we started descending. After about 670 meters, we reached a paved road and a trail junction. We continued straight on the red-marked trail, which also had the Golan Trail colors on it (7).

We walked on the paved road for a long time, about 2.3 km, while passing by more orchards. From what I’ve read, some of those orchards are supposed to be cherry orchards, but we missed the season. The orchards belong to the Druze people who live in the area, so even if you do see cherries or any other fruit that you like, DON’T PICK! It’s their living. On the way, a car stopped by us and the Druze who were sitting inside gave us some candy, which was very nice.

After those 2.3 km, we reached a left turn towards the final ascent to the top of Mount Odem (8). The mountain rises to a height of 1,187 meters. But the climb isn’t difficult at all. The mountain is made of reddish rock named scoria, which gave it its name – Odem (“Redness”). We even passed by a huge scoria quarry.

At the very top of the mountain, there’s an abandoned Israeli base. It wasn’t demolished because of the chance that we might need to use it again. The trail marks showed that we need to bypass the base, but one of my friends, Nitai, said that we should go up to the base. “Are you sure?” I asked him, “We shouldn’t get off the trail in the Golan.”

“There’s no fence or any warning sign here,” he said, “And you can see people came here,” he pointed out at the ground, which had tire marks on it.

So, we climbed up to the base. It was amazing, and so was the view. Nitai and Ayelet went deep inside the base, into the underground bunker, but I preferred to stay outside and watch the bags. I also took a look at the map and saw that we had actually walked into a minefield, that surrounded the base.

“It’s a minefield!” I told them when they came back.

Nitai looked surprised and not too nervous, “It’s supposed to be ok. You can see people were here. Let’s just follow the tire marks back to the trail.”

As you can see, we didn’t explode. But do be careful and don’t get off the trail if you don’t have to.

From Mount Odem to the campground

We got back to the trail and started walking down the mountain until we reached Mount Odem Lookout (9). There were signs there, explaining the view and about the Odem Forest. There was also a lone tree, so we used the opportunity to take a rest beneath its shade. In front of us, in the distance, we could see the huge turbines which operate in the Golan Heights.

After resting, we continued our way down the mountain. At the bottom, we started walking through the woods again. There were many thornapple trees and Ayelet and Nitai picked its fruit and ate it. They also gave me some. It was a bit sour but very tasty.

After about 4 km, we reached the end of the segment, the Palsar 7 Memorial (10). The memorial was made in memory of the members of the 7th Brigade Recon Unit (Palsar 7), who fell in several battles. One of their most brutal battles was near this point, around Mount Hermonit, in the Valley of Tears, during the 1973 Yom Kippur War.

Right next to the memorial is the Palsar 7 Campground, where we stayed the night. There are half-circles with concrete floor, where you can put a tent or a sleeping bag and stay partly protected from the wind. There are also picnic tables, a huge projector, and a chemical toilet. But there’s no drinking water. So, we filled our water at a restaurant in nearby Buq’ata.

When we stayed at the campground it was quite crowded. At night, we had a lot of noise because some guys were riding on loud motorcycles four hours during the night, and the road is right next to the campground.

You can move on to the next segment – from Palsar 7 Memorial to Ein Zivan.

If you want to end at this point, you can easily catch a bus from Buq’ata or from El-Rom, both within walking distance from the campground.

Day #1 of the Golan Trail is an easy hike with beautiful views of northern Golan Heights. We were there in October when the landscape was still quite dry after summer, but if you come here in Spring, it’s supposed to be much more blossoming.

Save it for later:

Village on the Cliff: A Beautiful Stay in the Golan