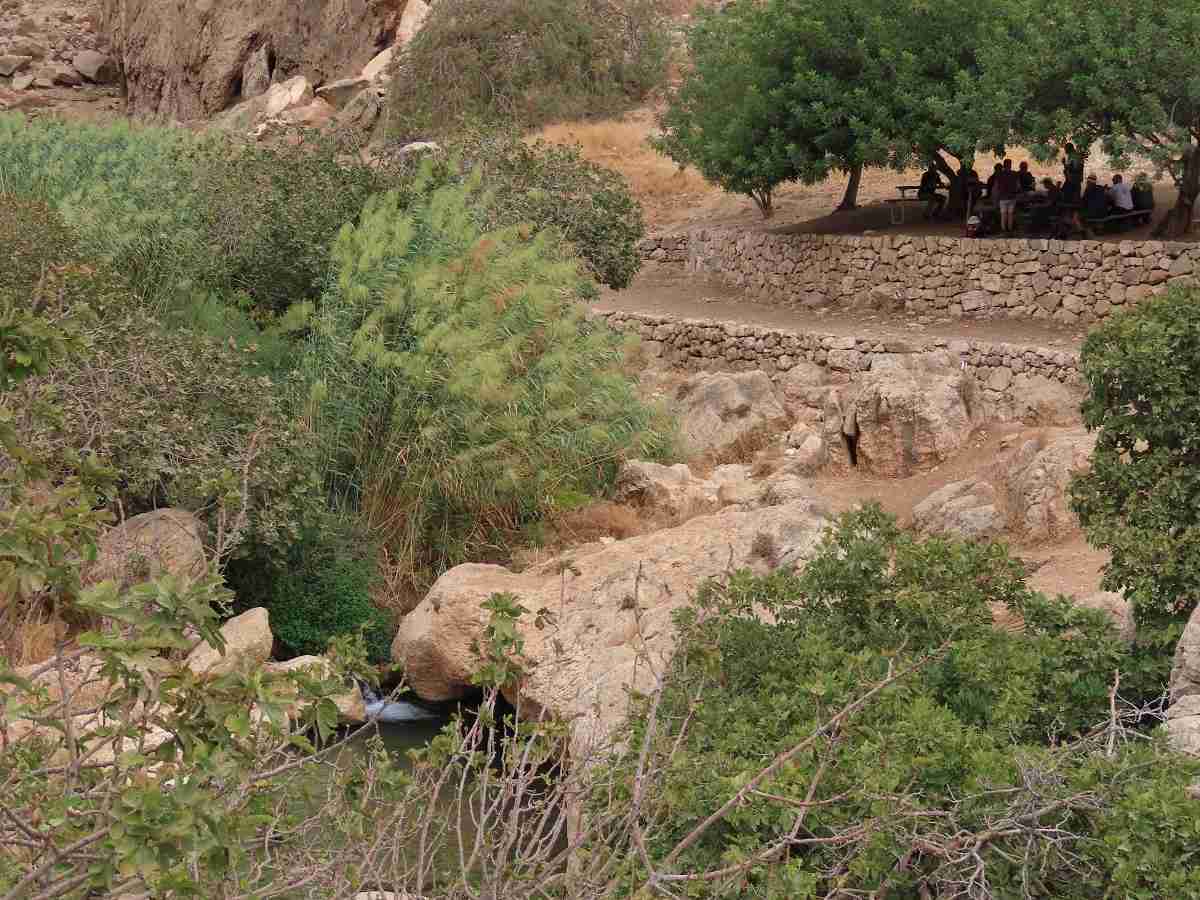 I’ve always wanted to go to Ein Prat Nature Reserve but heard that it’s hard to get there by public transportation. It’s located in the Judean Desert, below the Jewish settlement of Almon. “To get there,” my friend once told me, “You will need to hike all the way down a steep curvy road, and then you’ll need to climb it all back.” I was almost tempted to take up the challenge, but then my friend asked if I’d like to join her by car. Maybe I’ll try to hike down there another time. But if you have a car, that’s easier.

Ein Prat, also known as Wadi Welt, is one of the most beautiful places I’ve been to. We went there at the end of summer, so maybe it’s even prettier after rainfall. When we were there, there was flowing water, charming pools, and even some green plants growing on the riverbeds. There are several trails you can take. We hiked about one hour to the small and beautiful gorge and then retraced our tracks back to the starting point.

Here is my experience from the beautiful desert oasis of Ein Prat Nature Reserve.

How to get to Ein Prat Nature Reserve?

We got there by car, which is the easiest way. From Jerusalem, take road number 1 to the east. Continue for about 30 km and then turn left onto road 437. Drive on this road until the right turn to Almon (in Hebrew: עלמון). Drive through the settlement until you see the right turn to the reserve. There’s a sign. Then, proceed to the park’s cashier, pay the entrance fee, and drive all the way down to the water. Overall, it takes about 30 minutes to reach Ein Prat from Jerusalem.

If you don’t have a car or don’t want to rent one, you can also reach the place by public transport. Though, take in mind that you will need to walk a lot to reach the water spring. The bus to Almon – line 149 – leaves from the Hazme Barricade, at the entrance to the Pisgat Ze’ev neighborhood. Get off at Morad Nahal Prat station (in Hebrew: מורד נחל פרת). Then, you will need to walk down the curvy road to the reserve. On the way, you’ll pass by the cashier, where you’ll need to pay. Then, you can walk down the curvy road for about 30 minutes. Alternatively, I think there’s also a hiking trail down. Ask the cashier (and let me know in the comments).

The hike to the gorge

The hike to the gorge is about 1.8-km long (one way). The difficulty level is moderate.

Some park rangers were sitting at the entrance of the pumping house. We decided to ask them what trail we should take. “We’re short on time,” we told one of them, “Is there a trail we can do in two hours?” He recommended hiking to the gorge.

We filled drinking water at the pumping house and then started walking east on the road. Very soon, we left the road and turned left onto a green-marked trail. In the past, it looks like it was a red-marked trail because the old trail mark is still visible but fading.

The story of “the smallest settlement in the world”

The first part of the green-marked trail goes on a gravel trail. Very soon, we passed by a lone building with white window shutters. Later I tried to find information about it. In one source, it said that it’s the “smallest settlement in the world.” It was the home of Yael Yisrael. She moved to the reserve with her family in protest of the murder of six Israelis by Palestinians in the 1990s. Those young Israelis were murdered, each on a different date, while hiking or bathing in the reserve.

Many nature lovers didn’t like the fact that Yael Yisrael stayed in the reserve after closing hours. They claimed that the family’s presence disturbs the animals who come to drink from the water springs. So, they turned to the High Court of Justice, which decided the family must leave the house.

The building which housed the Yisrael family was built by the British and used to guard the nearby pumping house.

After we passed Yael Yisrael’s former home, we reached the banks of Nahal Prat. The stream makes its way from Jerusalem to the Jordan Valley, spanning over 30 km. We walked beside and above the water and were amazed by the beauty of the place. There were several gorgeous waterfalls. And here and there we got to see some animals coming to drink from the water, including a stunning gazelle.

After about 530 meters, we reached a trail junction. We continued straight on the blue-marked trail. It says that it’s the way to Ein Mabo’a, a water spring that “beats” rhythmically. But we didn’t go to Ein Mabo’a. If you’d like to see it, you’ll need to walk a bit farther than us.

We went on the blue marked trail and the trail became a bit more challenging. We needed to climb some rocks on the way. There were even some hand and leg bars to grab. There was also a place where we had to pass through the water, and it was challenging because I didn’t have waterproof shoes.

At some point, we also spotted the remains of an ancient water aqueduct, dating from the 1st century BCE. According to recent studies, it seems that the aqueduct carried water from the springs to the Kiprus Fortress.

To the gorge of Nahal Prat

About 800 meters from the trail junction, we reached another trail junction. There, we continued on the blue-marked trail, to the left.  We had to cross the stream again. I found a rock which I could use to pass without getting wet.

Then, we continued a short while to the gorge. There was a short and steep climb down, which included a hand railing. And then we were there. BEAUTIFUL. There’s a waterfall at the front, and the stream goes through a short and narrow gorge. I’ve read somewhere that it can get to a depth of 4 meters, which is quite deep!

We sat above the stream for a while, taking advantage of the shade, and ate a small breakfast. Then, we made our way back to the pumping house on the same trail as before.

A short walk to the pools

We came back to the pumping house. Then, we continued on a blue-marked trail to the west. This trail is very short. It takes you to several natural pools, where you can wade. If you don’t want to walk too much and just get refreshed, these pools are perfect for that.

There’s also a possibility to take the short but steep trail up to Paran Monastery. Built around 330 CE, it was the first Christian monastery in the Judean Desert. It was established by Saint Chariton the Confessor, the founder of monasticism in the Judean Desert. To enter the monastery, you must talk to the monk (phone: +972-52-5399075), and he doesn’t always let people in.

Ein Prat Nature Reserve is one of the best water trails near Jerusalem. It’s amazing to see the contrast between the yellowish color of the cliffs and the greenish color of the water. Though, if you want to enjoy the place at its most beautiful time, I think it’s best to come in spring, around February-April. I have a feeling everything is even more beautiful then.

Looking for more day trips from Jerusalem? Here are some of my favorites:

Visited the reserve in October 2021.

The Sea to Sea Trail: From the Med Sea to the Sea of Galilee