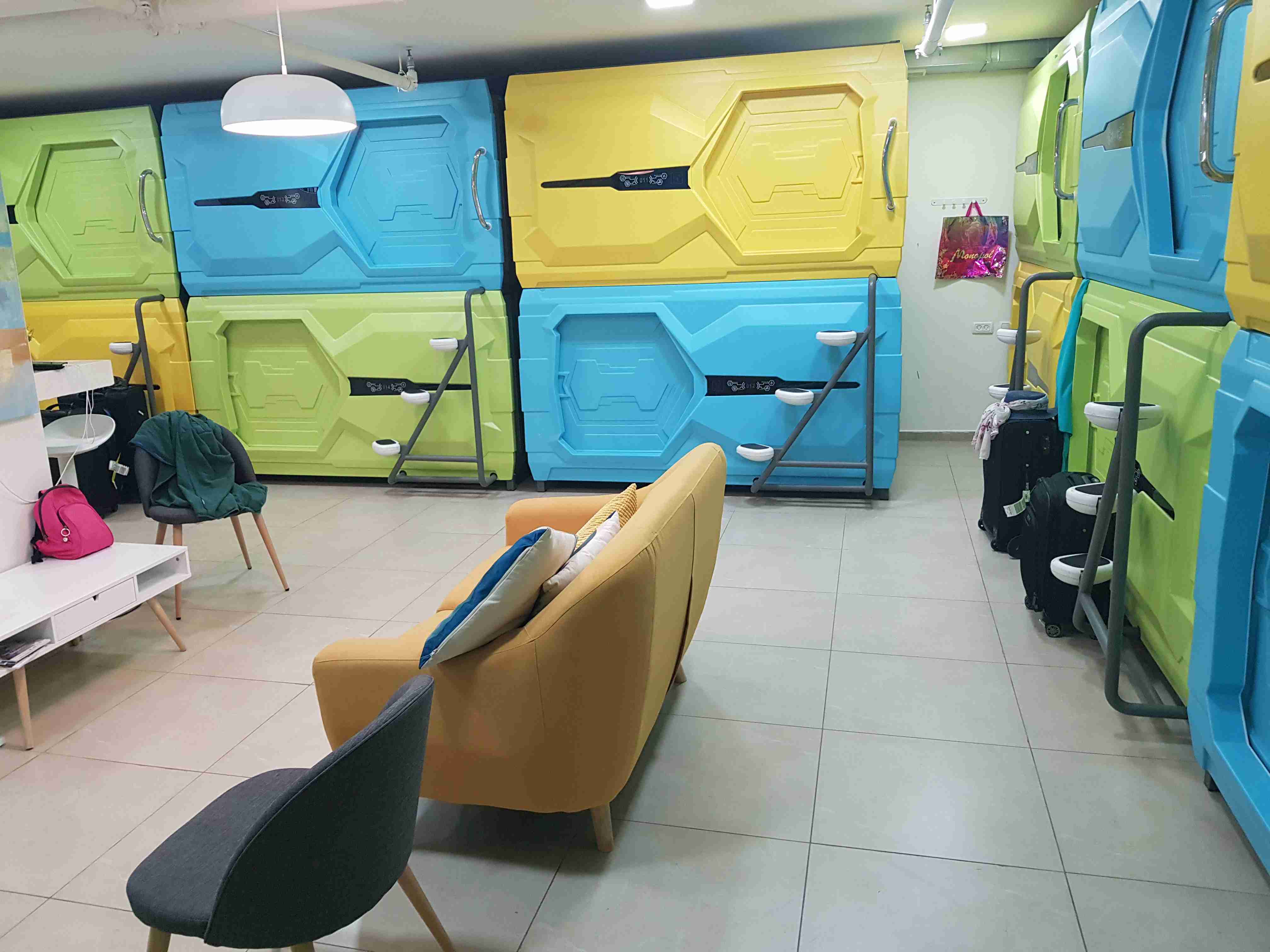 Jerusalem is an amazing city, and there’s nothing like staying in the middle of the city to truly experience its vibes. That’s why I decided to spend 3 nights in Jerusalem, each night in a different hostel. The first one I stayed in was CapsuleInn. From the photos online it seemed like a really cool place, and I’ve also read that it was the FIRST capsule hostel built in Israel, so of course, I had to check it out.

Here’s a promotional video of CapsuleInn, made by the Hadassah Academic College (in Hebrew), which includes some filming from inside the hostel:

In this post, I’m going to tell you the main things I have to say about CapsuleInn. If you don’t have time to read through it all, here’s a very short summary:

Location: 5 Stars – Perfect location! The hostel is located right next to Jaffa Street, a few steps away from Ben Yehuda Street and about a 10 minutes’ walk from both Machane Yehuda Market and the Old City.

Cleanliness: 5 Stars – Everything was very clean when I stayed there.

Staff: 4 Stars – Overall staff were very polite and nice, but they could try to not talk too loudly, because the reception is exactly where the capsules are and they aren’t soundproof.

Security: 5 Stars – I felt very safe. The front door is auto-locked and can only be opened by the receptionist or with the chip they give you at check-in. The capsules can also be locked from the inside.

Facilities: 3 Stars – The capsules are great, but they aren’t soundproof. Other than the capsules there’s not much more in the hostel. There is no bar and there is only one common area, which is where the capsules are and that means you need to keep your voice down. Also, the shower I used did not have hot water. Later I understood that they have some problem with it, which can be sorted.

Atmosphere: 3 Stars – I think this hostel is less suitable for those who want to meet people and socialize. The common area, as I said, is where the capsules are and it’s not so pleasant chatting there, knowing that you might be disturbing someone in their capsule. There are also no special activities. It’s just you and your capsule.

Value for Money: 3 Stars – CapsuleInn offers a capsule for 100 ILS a night. In other hostels, 100 ILS is more or less the price of a bed in a mixed dormitory. The difference in CapsuleInn is that you get some privacy in the dormitory because the capsule can be completely closed and locked from the inside. Other than the capsule, there’s not much offered. There’s no breakfast, there’s only one common area, there’s no 24/7 reception and in my case, there was no hot water in the shower.

Sleeping in CapsuleInn is like sleeping in a small spaceship. If you’ve never slept in a capsule before, this might be a good opportunity to experience this special type of accommodation. The design of CapsuleInn is very beautiful and amazing, but I believe they have some things to work on to improve the place, like making sure that the showers always have hot water and finding a way to keep noise levels down. If you’re less interested in meeting new people and socializing and more interested in laying your head down after a long day of exploring Jerusalem, CapsuleInn could be an interesting option.

The hostel is located in the center of Jerusalem, at Jaffa 35. There are plenty of restaurants and bars around, and the trendy Ben Yehuda Street is just a few steps away. It’s also just 10 minutes by foot from Machane Yehuda Market and the Old City. To get to the hostel, you can take the light-rail train to “Jaffa Center” station and then walk about 250 meters east until the right turn to the hostel. There are a couple of stairs and then you get to the entrance. After entering, you need to climb down a bit more stairs and then you’re there. And what’s amazing is that you don’t hear the street from inside the hostel, although it’s right above you.

The hostel is very small. The reception is in the same room as the capsules, which is a bit weird. There are 26 capsules, all situated around a small common area with some sofas and a table. There’s also a space with personal lockers and a corridor leading to the toilets and showers. I felt that there were plenty of toilets and showers. Other than that, there’s nothing else.

The highlight of the stay is the capsule. I stayed in an upper capsule, which meant I had to go up the steps to its entrance. You open the capsule with an electronic card – which is by itself quite cool – and then you climb inside. The capsule is like a mini private room, with a mattress (which for me wasn’t too comfy, but was bearable), a mirror, USB charging points, ceiling lights, reading light, air conditioning, hangers and ever a small TV with different Israeli channels. If you like, you can play around with the buttons of the capsule and change the lighting to blue, yellow, green and many other colors, which is super cool! You can also lock the door of the capsule from the inside, which really gives you a lot of privacy. The only problem with the capsule is that it is not soundproof, which means you hear every little thing that happens outside your capsule. It’s less suitable for light-sleepers. If you’re coming as a couple, you can also get a double capsule.

Everything was very clean, including the toilets and the showers. I also saw the staff changing the linens of the mattresses.

There’s a free tea and coffee stand. You will need to wash the cup after yourselves. There’s also a small refrigerator, where you can store small things. But breakfast is not included, so don’t count on it.

There’s free WIFI, which sometimes works but sometimes doesn’t. When it works, it works great.

Although it’s written that you have to pay extra for a towel, I was given one with no charge. The linen was also free. At the reception, you can see a list of things that you can purchase for extra payment, including a bathing kit, a toothbrush kit, flip flops, and luggage storage.

A disappointment was the shower. When I tried to take a shower in the evening, the water was cold. Even after waiting for a few minutes, the water was still cold. I was told later that there is sometimes a problem with the heating system. So, if this happens to you too, I suggest you go to the reception and ask them to try and solve the problem. Other than that, the shower has soap, a mirror and a stool on which you can lay things down.

The staff were polite, but there was a downfall (that was solved later very quickly). During check-in, I was greeted by a guy at the reception who was very polite, but insisted to charge me again although I told him I had already paid through Booking. After getting home and seeing that I was indeed double-charged, I contacted CapsuleInn via E-mail and got a quick respond from the owner saying that they will return my money. They contacted me via phone and returned the money. So, they are alright, but still, I suppose this could have been avoided. Other than that, the fact that the reception is where the capsules are is a bit disturbing. Every time someone comes to check-in or check-out, you can hear everything, and if the receptionist talks on the phone, you can also hear it. Also, keep in mind that the reception does not operate 24/7. On the one hand it means less noise from that direction, but on the other hand it means it would be harder to get help in the middle of the night. There is a number to call, though, in case of emergencies.

So, to sum it up… CapsuleInn is a small and beautiful hostel, which offers a very special and cool accommodation experience. You just have to keep in mind that the capsule isn’t soundproof and that it’s a fairly new hostel, which means there could arise some slight problems during your stay. If you’ve never stayed in a capsule before, I truly recommend checking out this place, which is also quite affordable!

Book a capsule at the CapsuleInn

Review written on September 2019. My stay in CapsuleInn was part of a personal trip and was not sponsored by CapsuleInn or any organization.

Camping in Israel: The Basics

Where to Stay in Tel Aviv? (For Budget...

The Spot Hostel: It’s a Cool Place in...

Off the Square: A Cute Guestroom in Safed’s...

[…] staying a night at CapsuleInn Jerusalem, I moved to the other side of the road to check out Jerusalem Hostel. While CapsuleInn is one of […]