Home » Bar Mitzvah at the Western Wall: What’s It All About?
Fun facts & enrichmentJerusalem

Bar Mitzvah at the Western Wall: What’s It All About? 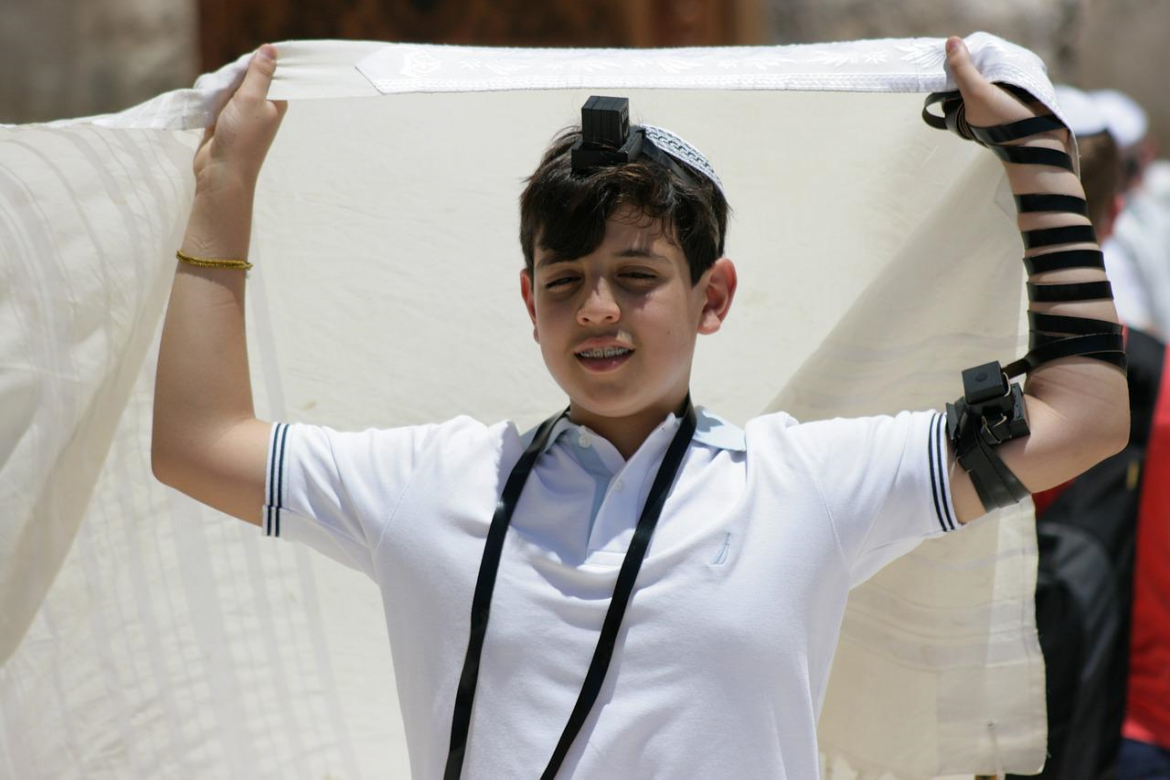 Planning to visit the Western Wall in Jerusalem on a Monday or Thursday? You may come across an interesting event. On those days, groups of celebrators go from Dung Gate to the Western Wall, accompanied by drummers and trumpeters. These people are celebrating a Bar Mitzvah, one of the most important ceremonies in the life of a Jew. What is a Bar Mitzvah? When is it celebrated? And what happens at the Western Wall? Here’s a post for those who want to know more about this significant Jewish ceremony.

Before we begin, I must emphasize that I am not a religious Jew, but I see myself as traditional. I have been to many Bar Mitzvahs in the past and have also seen the Bar Mitzvah at the Western Wall. So, I will try to describe it in the best possible way. Bar Mitzvahs could be a little different between different Jewish groups, so if you’re a Jew and you see something missing, it may be because it’s a tradition connected to your community, or maybe I described something too generally.

What is a Bar Mitzvah?

Let’s start with the basics. A Bar Mitzvah is a celebration marking the entry of the 13-year-old Jewish boy into adulthood. From the age of 13 onwards, Jewish boys are held accountable for their actions and can participate in Jewish rituals. This means they can read from the Torah at synagogue and lead or participate in a minyan, which is a minimum of 10 Jewish men who gather to perform a public prayer. They are also obliged to follow the Jewish law and can be witnesses in a rabbinical court.

I’ll tell more about the different stages of the ceremony further on in the post.

What about the girls?

Jewish girls also celebrate a Bat Mitzvah, but because there aren’t many Jewish obligations for Orthodox women, they don’t have a Bar Mitzvah ceremony like the boys. They celebrate at the age of 12, and their ceremony does not include wrapping the Tefillin or the reading of the Torah. Recently, the Western Wall Heritage Foundation has started holding Bat Mitzvah ceremonies close to the Western Wall. But most Jewish girls in Israel will usually not hold a religious ceremony. They will usually have a party with their family or friends. Personally, I didn’t hold any party or ceremony at all, while my brothers did a ceremony in the synagogue.

Reform Jews, on the other hand, may hold a Bat Mitzvah very similar to the Bar Mitzvah, including the reading of the Torah. Usually, Reform Jews celebrate the Bat Mitzvah when the girl turns 13, just like the boys. In Jerusalem, it’s possible to hold a Reform Bat Mitzvah at the Ezrat Yisrael area, to the south of the Orthodox Western Wall.

When do you celebrate the Bar Mitzvah?

As I’ve already mentioned, boys celebrate the Bar Mitzvah at the age of 13. The ceremony will take place on a day when the Torah is read. There are three days on which the Torah is publicly read: Mondays, Thursdays, and Shabbat (Saturday). If the birthday falls on one of those days, the boy can celebrate that day. If it doesn’t fall on those days, he will celebrate on the nearest Torah reading day.

Bar Mitzvahs do not happen at the Western Wall on Shabbat for fear of Shabbat desecration. Shabbat is the Jewish holy day, on which it is not allowed to take photographs or drive or ride in a car. If there will be ceremonies at the Western Wall on Shabbat, some family members or friends might want to take pictures and come in their cars. The Orthodox Jews do not want that. Also, according to Orthodox Jewish law, it is not allowed to wear Tefillin on Shabbat. Instead, if the boy’s birthday falls on Shabbat, the boy reads from the Torah at synagogue and on Sunday wears Tefillin.

So, at the Western Wall, you’ll be able to witness a Bar Mitzvah only on Mondays and Thursdays.

What happens during a Bar Mitzvah at the Western Wall?

So… What happens during a Bar Mitzvah at the Western Wall? Here are the main steps:

Walking to the Western Wall under a chuppah

The family and friends of the boy gather near Dung Gate and then start marching towards the entrance to the Western Wall Plaza. Usually, they are accompanied by drummers and trumpeters which make a great atmosphere. They sing, they dance, and they’re all very excited, for a good reason.

Every time I see Bar Mitzvahs at the Western Wall, I see the boy walking underneath a chuppah. The chuppah is a piece of cloth supported by four poles, each pole held by one of the ceremony’s participants. Usually, it’s used during a Jewish wedding ceremony. The bride and the groom stand beneath the chuppah while the Rabbi weds them. In Bar Mitzvahs, a chuppah is less common. Actually, I’ve never seen it being used during Bar Mitzvahs in synagogues. Only at the Western Wall. But I guess that entering the Bar Mitzvah ceremony under a chuppah adds respect to the event.

The music stops at the entrance to the Western Wall Plaza, and from there, the boy continues to the ceremony itself. All this first part of the Bar Mitzvah isn’t mandatory, but I’ve seen many people do it at the Western Wall.

The Bar Mitzvah ceremony at the Western Wal begins with a set of blessings and then, the boy wears the Tefillin. The Tefillin are two black leather boxes, that contain Hebrew parchment scrolls mentioning the commandment of putting on the Tefillin. One box is for the head and one for the arm. The Torah says: “You shall bind them as a sign upon your hand, and they shall be for a reminder between your eyes” (Book of Deuteronomy, 6:8).

Every boy who reaches Bar Mitzvah gets his first Tefillin, which he will be able to use throughout his lifetime. During the ceremony at the Western Wall, the boy straps the Tefillin to his arm and head in the precise way that is needed. Then, he recites the Shema prayer, while placing his hand over the eyes. The first verse of the Shema says: “The Lord is our God, the Lord is one.” This is the most important declaration of the Jewish faith. By wearing the Tefillin, the boy commits to the Jewish faith and to the rituals associated with it.

Many Jewish men, who do not see themselves as religious Jews, continue to wear the Tefillin every morning. So, you can understand how meaningful this ritual is.

Apart from the Tefillin, the boy will also wear a Tallit, which is a special prayer shawl.

Reading of the Torah

After wearing the Tefillin and calling out the Shema, the ceremony continues with the reading of the Torah. The boy doesn’t have to read from the Torah itself. He can just recite the blessings at the beginning and end of the reading. Reading a portion from the Torah requires long training because you must read the Torah in a certain way. Because not everyone can read it that way, it is not mandatory that the boy will read the portion. A designated person, called “ba’al korei,” can do it for him.

This phase of the ceremony starts by taking the Torah scroll out of the Ark. There are Arks situated near the Western Wall. The boy and other men in the party go to the Ark. One of the men takes out the scroll and passes it over to the boy. Then, the boy carries the Torah scroll back to the stand on which he wore the Tefillin.

After reciting the blessings on the Torah reading, the reading itself will begin. The portion read is different every week. Some parts of the reading can be done by the father of the boy or other family members. The reading is done with a ritual pointer, a long rod with an index finger pointing out of it. They use this pointer to guide their reading because you cannot touch the scroll with your own finger.

At the end of the reading, there will be some more blessings, and then the scroll will be taken back to the Ark.

You might notice that some families throw candy on the Bar Mitzvah boy after he finishes reading the Torah. Usually, it’s done by women. Because the women are not allowed in the men’s area, they throw the candy from behind the fence that separates the men’s area from the general plaza.

Candy throwing is a tradition and there are all kinds of explanations for it. Originally, it was a tradition to throw candy on a bride and groom on their wedding day, to make the day even happier. Today, throwing candy at a wedding is less common, and is much more common during Bar Mitzvahs. Because throwing candy makes a lot of commotion in the synagogue, many call not to do it. Yet, people continue with this tradition.

Can you watch the ceremony?

Unlike synagogues that are closed structures, the Western Wall Plaza is in the open air. So, it is possible to watch the ceremony even if you are not part of it. Though, you should know that the Western Wall Plaza is divided into men-only and women-only areas. The Bar Mitzvah takes place in the men-only area, so women are not allowed to enter. Still, if you are a woman, you can stand next to the fence that separates the men’s area from the general plaza. There’s a step next to the fence, on which you can stand to view the ceremony better. This is usually where the women connected to the ceremony stand, so try not to block their view.

The Bar Mitzvah is one of the most important and meaningful ceremonies in the lifetime of a Jewish boy. Usually, it’s done in a closed synagogue, so you can’t witness it unless invited. At the Western Wall, anyone can view the ceremony because it is done in a public space. So, if you ever wondered what a Bar Mitzvah ceremony looks like, visiting the Western Wall on a Monday or Thursday is a good opportunity.

Want to learn more about Jewish customs in Israel? Read my post >> Judaism in Israel: 8 Questions you Might Ask.

Pin it for later!

Coming for a Bar Mitzvah and looking for a guided tour afterward? I’m a private tour guide and will be happy to give you a tour of Jerusalem (for up to 8 people). Contact me at lior@backpackisrael.com for more details.

5 Beautiful Views of Jerusalem – and Most Are Free!