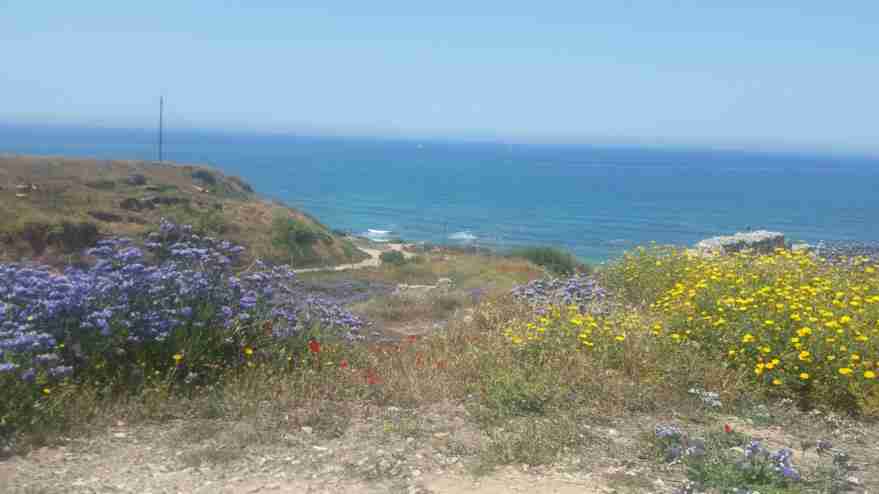 (and how to pay less to get in)

Israel is full of nature, history, and archeology. Within only 470 km of length and 135 km of width, you can find 70 magnificent nature reserves and national parks. One of those parks is Apollonia National Park, located along the seashore, near Herzliya, on a very impressive kurkar promontory. I’ve visited Apollonia a few weeks ago and discovered that besides its main highlight – the remains of the ancient city of Arsuf – you can enjoy a beautiful view of the Mediterranean Sea and the wonderful flowers that rise from the sides of the walking pavements.

Apollonia started its way as Arshuf and that’s why the site is also called “Tel Arshuf”. “Tel” is a man-made hill, covering the remains of an ancient city, and in this case – covering the remains of Arshuf. The Phoenicians arrived at the seashore in the 6th century and settled here, calling the place Arshuf after their god of storms, Reshef.

After quite a long time, and after the settlement was taken from one hand to another, the Greeks arrived and conquered the place. It was hard for them to say “Arshuf”, so they changed the name to “Apollonia” because they identified Reshef with Apollo.

The site’s history doesn’t stop here: more and more empires and groups took hold of the place, the city became a guarding post in the Muslims’ era and the Crusaders also settled here for a while. When visiting Apollonia National Park, you can read all about the rich history of the place on top of the informative signs that are posted all around the park.

So I started my visit near the ancient city’s moat, which was built to make sure no wall-breaking machines would be able to get to the city wall. This moat was the edge of the city in the Crusader Period.

When I walked towards a shaded viewpoint, I was amazed by the beautiful purplish Limonium flower (“Adad” in Hebrew). The purple comes from the flower’s leaves. The park is full of it, so you can’t miss it!

From the first viewpoint, you can see the remains of an ancient villa from the Roman Century, facing the ocean. After the villa was destroyed by an earthquake in 1127,  it was abandoned.

I also liked the “Burnt Room”, located at the end of the park, near a beautiful porch overlooking the sea. In this room, there are piles of rolling stones. The Muslims rolled those stones on top of the Crusaders’ heads while they were trying to take over the place. The room was seriously burnt down because you can still see some signs of fire on the stones and walls.

If you’re into archeology and love the sea, Apollonia is a great place for you!

Some tips before you go:

If you’re planning to visit at least 3 national parks in Israel, the Money Saving Tickets could come in handy. Those tickets can save you precious money! You can’t get the ticket at Apollonia, but you can get it in other major parks (read the list in the link). The most worthwhile tickets, in this case, are the ones valid for 6+ parks because Apolonnia costs 22 Shekels. For more info, you can also read more on money-saving tickets in Israel.

The site is facing the sea, so to get the most out of your visit to Apollonia, I recommend you come near sunset, to see the sunset above the ancient city’s remains.

Spring. If you want to enjoy the flower blossom, come here around April-May.

How to get to the park?

If you don’t have a rented car, the closest bus station is שער הים/נתיב הל”ה (Shaar A-Yam/ Nativ A-Lamed-Hei) or שער הים/האשל (Shaar A-Yam/ A-Eshel). Those stations are about a 20 minutes’ walk from the national park. Buses number 29 and 13 arrive at those stations from Herzliya. If you do have a car, you need to turn towards Herzliya Pituah at Kfar Shemaryahu junction, and at the second traffic circle, turn right onto Wangate Street, which will lead you to the park.

Read more about Apollonia in the official website of Israel Nature and Parks Authority.

Have a great time,

From Down Below: 69 Years of Independence

Ein Prat: A Beautiful Walk in a Desert...

Hiking the Israel National Trail: From Mashad to...