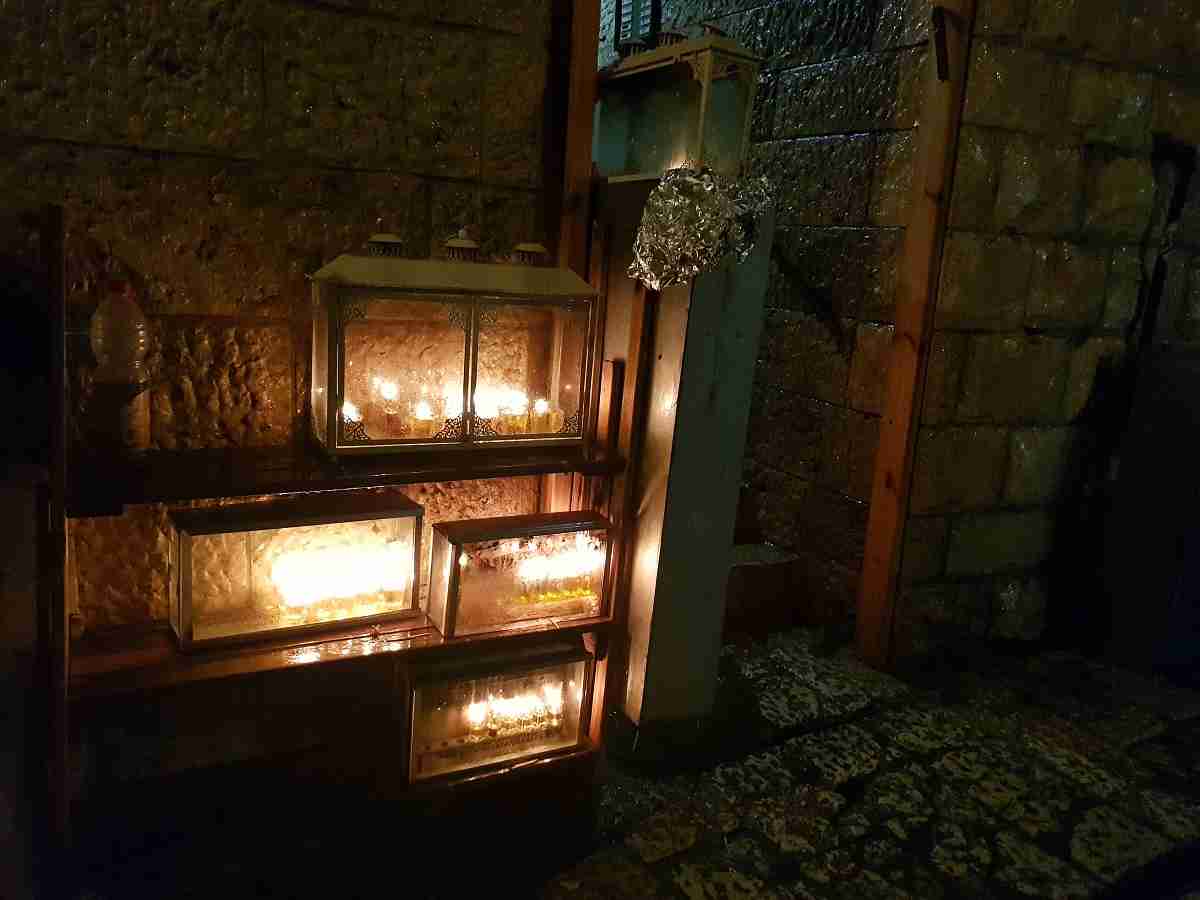 Channukah is the Jewish “Festival of Lights.” In recent years, I’ve learned that many religions celebrate holidays connected to light during November or December, the wintertime months. This is because during those months, the darkness comes earlier during the day, and people wanted to drive it away. In Channukah, we sing the song “Banu Choshech Legaresh,” which means “We came to drive the darkness away.” I never understood why we want to drive the darkness away until I connected it to wintertime and the early sunset.

But the Jewish people have a different reason for celebrating Channukah. The holiday is not mentioned in the Torah, so it’s not connected to religious reasons. In Hebrew, “Channukah” means dedication.” During this eight-day holiday, we celebrate the rededication of the Holy Temple.

In the 2nd century BCE, the land was ruled by the Syrian Greeks. They tried to force the Israelites to accept the Greek culture and beliefs. They even took hold of the Holy Temple and impurified it. A group of Jewish rebel warriors named the Maccabees, fought against the Syrian Greeks, and drove them away.

The Maccabees reclaimed the Holy Temple and rededicated it to GOD. As part of the rededication, they had to light the Temple’s menorah, which is a seven-branched candelabrum. But they only found one jar of olive oil. This amount wouldn’t last enough time to keep the menorah lightened until more olive oil would arrive. But they tried anyway and miraculously, the jar of olive oil lasted for eight days, until a new supply of olive oil arrived. On Channukah, we celebrate this miracle.

If you’re planning to visit Israel on Channukah, I’ve gathered 5 ways to celebrate Channukah in Israel.

When is Channukah celebrated?

This year (2022), Channukah will begin at sundown on 18 December and end at nightfall on 26 December. Every year, the date is slightly different. That’s because we celebrate our holidays according to the Hebrew calendar, which is different from the widely used Gregorian calendar. Channukah begins every year on the 25th day of the Hebrew month, Kislev. Usually, this day falls in December.

Here’s a nice video about Channukah from National Geographic:

5 ways to celebrate Channukah in Israel

One of the most joyful things to do on Channukah is to light the Channukah candles. The candles are lit in a hanukkiah, also called a Channukah menorah, which is meant to commemorate the menorah of the Holy Temple. The difference is that the hanukkiah has nine branches, while the original menorah had seven.

Every day, people gather to light the hanukkiah together. Because there are eight days, we can diversify who we light it with. One day it could be with the family, one day with friends, one day with co-workers. We can also light several hanukkiahs each day. On the first day, we light one candle. Then, we add a candle each day until we reach eight candles. On each day, we also light an additional candle, the “shamash,” because we cannot use the light of the Hannukah candles. Instead, we are using the light of the “shamash” (the “helper”.)

If you aren’t staying with relatives and you don’t have your own hanukkiah, you can join a public Channukah candle lighting. There are many lighting events throughout the big cities. Many businesses also light Channukah candles at their place, so if you happen to be in a restaurant or shop, there might be a lighting event there. The biggest event is at the Western Wall in Jerusalem. Usually, people light the hanukkiah close to sunset or a bit afterward.

I love lighting the hanukkiah because it involves joyful singing. It’s also a great opportunity to take a break from the day and celebrate with your loved ones.

Like most Jewish holidays, Channukah also has its traditional food. Because we celebrate a miracle connected to oil, we make food fried in oil. One of the most popular food items in Channukah is the sufganiyah, traditionally a round jelly-filled doughnut. Today, the bakeries fill it with all kinds of options, like chocolate, caramelized milk, and pistachio cream. The options are endless. The bakeries start selling these doughnuts even before Channukah, so just pop into one of the bakeries, and try one.

Get a dreidel from Israel

Channukah also has a traditional game – playing with a dreidel. The dreidel is a four-sided spinning top. On each side of the dreidel, there’s a Hebrew letter. When I lived in the USA, I remember that we played with a dreidel bearing the letters nun, gimmel, hei, and shin. Those letters are an acronym for “nes gadol hayah sham” – “a great miracle happened there.” In Israel, you can get a dreidel with the letters nun, gimmel, hei, and pei, which form the acronym for “nes gadol hayah po” – “a great miracle happened here.” It could be a great souvenir to take back home because this type of dreidel exists only here.

Playing the dreidel is an ancient game and surprisingly, it isn’t a Jewish invention. The ancient Romans played the dreidel a long time before we did. It continued being a popular game in Europe and most likely, the Jews discovered it in Germany. There, the letters on the dreidel were German and stood for “nothing”, “everything”, “half” and “put.” It was a gambling game. Each player spun the dreidel and had to react according to the letter that got revealed. The Jews changed the letters to Hebrew letters that had a good connection to Channukah. And we kids used to bet on the Channukah chocolate coins that we got.

Legend tells that in the time of the Syrian Greeks, the Israelite children would study the Torah in secret because it wasn’t allowed. When they heard a Greek coming, they quickly hid the books and started playing with the dreidels.

Go on a Channukah tour

There are places where you can see a large concentration of hanukkiahs. These include the Old City of Jerusalem, the Nachlaot neighborhood in Jerusalem, and the Old City of Safed.  It’s nice to walk around those places and see all the different candelabrums.

You can walk around these places on your own, or you can join a guided tour. On a guided tour, the guide will take you to the best places and tell you stories and details connected to Channukah. There are many companies that offer public Channukah tours. I offer public tours. If you’re interested to book a private Channukah tour with me, you’re welcome to contact me at lior@backpackisrael.com for more details.

Visit the Tomb of Mattathias the Maccabee

This option is not so much of a way to celebrate, but it’s an interesting option for those who want to do something unique. As I’ve already mentioned, Chanukkah commemorates the rededication of the Holy Temple by the Maccabees. Those were a group of Jewish rebel warriors, who fought against the Syrian Greeks and drove them away. The leader of the group was Mattathias ben Johanan who is better known today as Mattathias the Maccabee.

Throughout the years, many people have searched for the tombs of the Maccabee. Today, there’s a place believed by some to be the tomb of Mattathias. Usually, you’ll find some ultra-orthodox people over there, especially around Channukah. It’s located on the outskirts of Ben Shemen Forest, not far from Mevo Modi’im. It is also the site of Sheikh Arabawe, but nothing is known about him except his name. There is no archeological evidence that it’s the tomb of Mattathias, but the tradition exists.

You can get there by taking bus 425 from Jerusalem and getting off at “Mevo Modi’im Junction.” From there, it’s a 1.5-km walk to the tomb. Search for “Matityahu ve-bnav Tomb” on Google Maps. But don’t get too disappointed when you get there. It’s just a tomb.

You can see how it looks like through this video by Menachem Fooksman:

Channukah is one of my favorite holidays. For eight days, you get to gather with other people, light the Channukah candles, sing the holiday songs, and eat oily and tasty food. What more can you ask for? Hope you’ll have a great time in Israel and that you’ll get to experience the holiday spirit.

Want to learn more about holidays in Israel?

Read my post – Holidays in Israel and How to Spend Them During Travel.

If you need help with planning your trip, feel free to contact me through my trip planning service for Israel.